Led by local artist Charron Pugsley-Hill, Naming the Men is an event to be held at The Guildhall, Peterborough on the 9th and 10th November 2018, commemorating the Peterborough men – and one woman – who died in WWI

In Peterborough 1177 men died fighting in WWI and one woman who died when the ship RMS Hesperian sank after hitting a mine. This was a huge proportion of the population of the city which at the time numbered about 30,000. The men who fought, were injured and those who died came from the streets in which we live today and were fathers, husbands, brothers, friends, cousins and sons to the people left in the city working for the war effort. These men are the relatives of people living today a hundred years on in the city or further afield as families have moved away since that time. Many of the people who now live in the city will have relatives who fought and died in WWI as there were not many countries around the world who were not involved in this widespread conflict. 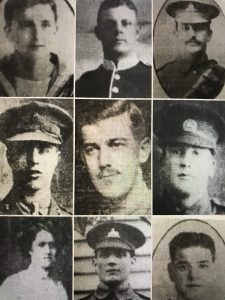 The event NAMING THE MEN will be led by Peterborough Artist Charron Pugsley-Hill in partnership with Peterborough City Council and will speak aloud the names of all these men and the 1 woman who died as a result of enemy action in The Great War. It will also tell some of the fascinating stories from the time.

Commemorative postcards will be given to the public with the individuals names on the cards as the name is read aloud in the square. Members of the public will be invited and encouraged to read aloud the names of the men during the event.

Charron Pugsley-Hill is an artist who has been creating a series of paintings and installations commemorating WWI since 2014 many of which have been created on site in France and Belgium. The installations have included THE SKY OF POPPIES in Queensgate Peterborough to commemorate The battle of The Somme and involved hundreds of people in its creation as well as felted blankets to commemorate nurse Edith Cavell and The Lonely ANZAC that were laid on The War Memorial to commemorate their deaths.

The official opening event will be held on Friday 9th November at 2pm at The Guildhall Cathedral Square Peterborough.