People have been placing valuable objects in the ground and in water since before the Bronze Age (c. 2200–800 BC). But why? Is it the ancient equivalent of banknotes under the mattress? Or an offering to gods? Or were they simply lost?

A new exhibition – organised by the British Museum in partnership with Salisbury Museum, completing its nationwide tour at Peterborough in October – looks at the varied and changing explanations for the burial and non-recovery of hoards. Bringing together objects from the British Museum and Salisbury Museum, including the spectacular Ipswich Iron Age gold torcs, Hoards: a hidden history of ancient Britain also includes never before seen Bronze Age finds from Must Farm and Ely. Moment editor Toby Venables talked to the exhibition’s curator, Eleanor Ghey, who will also be giving a talk at the Peterborough Museum on 6 Nov…

First things first… What exactly do we mean by a ‘hoard’?
It can mean various different things! There is very specific a legal, ‘treasure’ definition, and if something is to be declared ‘treasure’ it has to meet specific requirements. The hoards we deal with at the British Museum tend to be predominantly those – so, precious metals, groups of coins, that sort of thing. But a hoard can really be any group of things that have been gathered together for safekeeping and then put in the ground or lost. The oldest thing in the exhibition is actually a group of flint tools from East Knoyle in Wiltshire, dating from the Neolithic, which is about 4000-3000BC. They belong to Salisbury Museum who are our partners for this exhibition. Although that’s not metal and wouldn’t count as ‘treasure’ it was very likely of value to its owner and is still considered a hoard, so it’s really something that has been collected and then kept.

What are the most recent objects?
The most recent items are from the 17th century and include a ‘witch bottle’. People would place objects in bottle and jars and hide them in the roof or walls to protect them from evil spirits – or, possibly, for cursing people. They often have things like iron pins and nails, hair and nail clippings – and unpleasant bodily fluids! These are completely sealed, so no one really knows for certain, although X-rays show us the needles and pins. While it’s not exactly a hoard, I wanted to show that we were doing what many people would regard as ‘irrational’ things until relatively recently. People don’t always behave in rational ways. Even today, we put coins in fountains for luck. We may not literally believe there are spirits in them any more, but it’s still this ritual behaviour that has survived either as superstition or just habit. 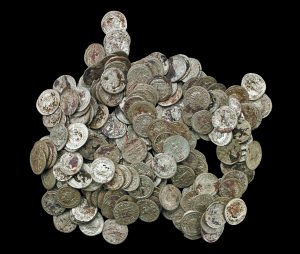 Silver coins from the Beau Street hoard, 3rd century AD © The Trustees of the British Museum

Do the reasons for hoarding things change according to the period or society they come from?
That’s partly what the exhibition is looking at – the different and various reasons for these things being in the ground and perhaps not recovered by their original owners. When we find them the owner obviously has not come back for them, but the question is, were they placed deliberately in the ground with the intention of them staying there, or were they hidden temporarily for the owner to come back to later – who then couldn’t because they died in a war, or had to move away, or simply forgot where they were buried? With prehistoric periods – the early Bronze Age for example – it’s very common for archaeologists to talk about things being deposited for ritual purposes, perhaps put in the water as an offering to gods or spirits, as we seem to see at Must Farm. In the Roman period, which is my specialist area, it’s often thought that they are gathered for more economic reasons, perhaps when there’s a change in the coinage. So, the exhibition is looking at all the different reasons – but also showing that some of the things that happen in the prehistoric period still happen at a later date, so perhaps we can’t make such hard and fast rules about what happens when. As archaeologists, we always want to know why people in the past do things, and while we can get so far looking at patterns of behaviour and groups of objects, we can never really know what they were thinking – but that’s something I wanted to invite people to do with this exhibition, to imagine why they think people in the past did these things. 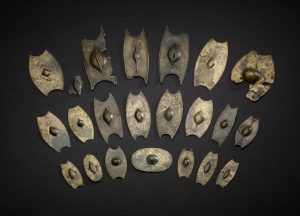 The stories of how they were found are as fascinating as the objects themselves – and it seems they are often not found by archaeologists…
That’s right – a large proportion of the finds we see are actually found by metal detectorists. They are often turned up by a plough or when people are digging for entirely unrelated reasons – sometimes still grouped together, but often dispersed. There’s an interesting story about the Salisbury Hoard which highlights some of the potential problems there… It came to light in the days before we had good legislation about treasure, and the discovery was initially kept secret and heard about on the grapevine, so we had to piece together the story. What is important about this hoard is that it seemed to be a burial of Bronze Age items in the Iron Age – so, it was buried around 200-100BC, but some of the items in the hoard were from 800-600BC or earlier. Because it wasn’t excavated by archaeologists, however, people were a bit sceptical and thought it might be two separate deposits that had just got mixed up, but more recent discoveries have demonstrated that this is a genuine phenomenon. It seems that people in the Iron Age really were putting weapons from a much earlier period – mainly Bronze Age axes – back in the ground. What’s interesting about these axes is that they were very thin and brittle and still had the flashing around the edge from the mould, so were never used and probably made for the purpose of being buried. The Iron Age people had presumably discovered them whilst farming or digging the land, recognised they were important and reburied them in their own rituals. Whether those rituals meant the same thing to them, we don’t know, but what’s also interesting about the Iron Age burials is that they made more items to add to the hoards, including very detailed miniature shields. These were also quite varied, so it seems a lot of different people were making them, which suggests this was of importance to the wider community, and that they had a strong connection to the place and the ancestors who lived there. 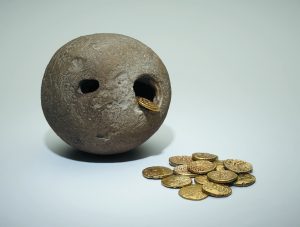 The Westerham hoard, a hoard of gold Iron Age coins found inside a hollow flint in 1927 ©The Trustees of the British Museum

Do you have a favourite ‘hoards’ story?
I really like the story of the Westerham Hoard, which was found in Kent – a collection of beautiful Iron Age gold coins that were buried in a naturally occurring hollow flint nodule. A man was digging in gravel pits in 1927 and picked up this interesting stone and put it to one side. Later they had a break for tea, and he picked it up again and poured his tea into the hole – and out came these gold coins! As a curator and an archaeologist it’s the stories that always grab me, but we do also have some wonderful shiny objects, such as some gold torcs from Ipswich which are really stunning.

Much of this will resonate strongly with local people who have been following the discoveries at Flag Fen and Must Farm…
In the Peterborough exhibition there will actually be some objects from Must Farm and Flag Fen which have been loaned especially; spectacular Bronze Age gold torcs from Grunty Fen and Ely, as well as objects from the Flag Fen Basin, including the rarely-seen Must Farm swords and a metalwork hoard from Bradley Fen that has never been on display before (kindly lent by Cambridge Archaeological Unit, Ely Museum and The Museum of Archaeology and Anthropology Cambridge). There are some other objects in the exhibition that tie in nicely with these, such as some Bronze Age spearheads that were deposited in the River Thames in Kent, so it will be great to display those alongside each other. What is so significant about Must Farm and Flag Fen is that you have this amazing state of preservation of organic material that is usually lost, so you can start to see the hoards not in isolation, but as part of peoples’ everyday lives.

6 Nov 7.30pm
Eleanor Ghey, Curator, British Museum
Hoards: a Hidden History
Eleanor will talk about the objects chosen for the ‘Hoards’ exhibition and what they mean. This British Museum exhibition has toured the British Isles and completes its journey here at the Peterborough Museum.

21 Nov 7.30pm
Stephen Upex, Archaeologist
Roman Durobrivae and the Waternewton Treasure
Stephen updates us on the latest archaeological investigations carried out at the local Roman town of Durobrivae. What is the significance of the hoards found here and what does the latest evidence tell us about the Durobrivae story?

27 Nov 7.30pm
Richard Hobbs, Curator, British Museum
The Mildenhall treasure: fine dining in Roman Britain
This large hoard of Roman silver vessels of the fourth century AD, is one of the most iconic finds from Roman Britain. This discovery became an overnight sensation when it was first displayed at the British Museum in 1946 and has since remained hugely popular.

Go on a Treasure hunt with us with October half term, to celebrate the Hoards exhibition, on loan from The British Museum. Uncover clues, crack codes – and discover the priceless treasure all around you! Perfect for all the family.

*Free entry to the museum after 3pm

Private tours of Hoards: A Hidden History of ancient Britain

Uncover more hidden history with our private tours of this fascinating exhibition. On loan for just a short time, this is a unique opportunity to discover more about the artefacts, and how this exhibition was curated – perfect for group outings. Exclusive use available.