BIG SOCIETY IN PRACTICE: A PARTNERSHIP BETWEEN BGL AND ORMISTON BUSHFIELD ACADEMY

In March this year the BGL Group announced a £30,000 partnership with Ormiston Bushfield Academy which is set to benefit hundreds of existing and future pupils. The Group pledged an initial three years of support and has already seen dozens of pupils receive invaluable careers advice including business seminars, CV workshops, work experience placements, and even job opportunities and apprenticeships. The partnership, dubbed as “Big Society in practice” by MP for North West Cambridgeshire, Shailesh Vara, will continue to bring invaluable opportunities for training, mentoring and apprenticeships to future pupils. BGL Group and Ormiston Bushfield Academy celebrated six months of partnership with the opening of a sponsored media and ICT wing at the Academy’s new £20.6 million building in September this year. 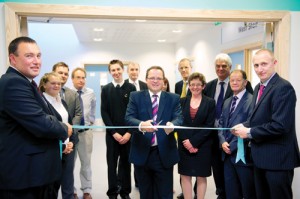 The new wing was opened by Jeremy Moll, a BGL Group Director and head of its Corporate Social Responsibility committee in an opening ceremony designed to recognise the partnership.
Two students from Ormiston Bushfield Academy have already taken up jobs at BGL Group after leaving the school, as a direct result of the partnership.

Principal of the Academy, Eric Winstone, is enthusiastic about the success of the partnership over the last nine months.-

Our partnership with the BGL Group has already provided learning opportunities to our pupils which has seen a number of them being offered work experience opportunities over the summer and even job opportunities after they leave school. The BGL Group is an important driving force behind the school’s successes, and we’re delighted that it has sponsored our new media and ICT wing in our new Academy building. This summer we were able to announce more fantastic GCSE and A Level results, and we also care passionately about our students’ workplace experience and enrichment. This partnership is a perfect example of how organisations and schools can work together to benefit the next generation

Academy staff will also benefit from BGL’s experience and expertise with representatives from the company sitting on the board of governors, and one of BGL Group’s directors delivers sessions with both Year 12 and Year 13 Economics groups to help bring the subject to life from a business perspective. In addition, the partnership has enabled the purchase of new equipment for the Academy’s media and ICT departments with the BGL Group officially sponsoring these two functions.