Today there is much made by politicians of a ‘Levelling-Up Agenda’, where funding should be targeted towards parts of the country that have been left behind in terms of investment in recent years, boosting the economy and local services in those places.

Three centuries ago, being a ‘Leveller’ had a very different connotation. The Levellers were a loose political movement that developed during the 1640s in the wake of the brutal civil wars that tore not only England but Wales, Scotland, and Ireland apart. In November 1647 representatives of this movement, some civilians but many more from Parliament’s victorious army, met senior officers at St Mary’s Church in Putney to discuss what sort of government the country should have after this ‘English Revolution’. Some of them proposed radical notions for the 1600s, including for the first time that all men should have the vote.

For the 375th anniversary of this meeting, and at a time when the nature of democracy seems more topical than ever given recent UK politics, the Cromwell Museum in Huntingdon now has a
new display which looks at the Leveller movement and this remarkable meeting in Putney. 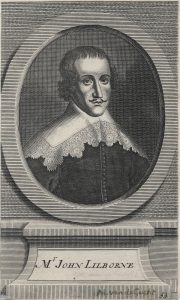 Who were the Levellers?
The Levellers were those who broadly wanted legal reform, religious toleration, more men to be able to vote and a government that seemed more answerable to the people. Leading radical thinkers like John Lilburne and William Walwyn inspired the movement, spreading their ideas through printed pamphlets. The name ‘Leveller’ was used as an insult by their enemies, implying that they wanted to abolish property rights and redistribute wealth, something which they strenuously denied.

Those ideas were adopted by other radicals at the time like Gerard Winstanley, who led a group of families who became known as ‘Diggers’, occupying common land and setting up communities with common ownership of property.

These radical political ideas were able to spread particularly in the political hotbed that was London at this time, but also beyond the capital thanks to the increased use of new technology – the printing press. Before the Civil War there had been strict government regulation and censorship of all printed materials, at a time when perhaps a third of the population was literate. Once war broke out, control disappeared and huge quantities of print was produced. Both sides used printing as a means of spreading propaganda. Printed texts could also be used to discuss, debate, and spread radical political ideas in a way that had never been available before in Britain, and the Levellers were very effective in doing this.

A Radical Army
Much of the Civil War between King Charles I and Parliament had been a stalemate, with neither side gaining an advantage. Military reforms championed in Parliament by an obscure Huntingdonshire MP-turned-soldier called Oliver Cromwell had led to the creation of a new, properly equipped, and organised fighting force in 1645, the ‘New Model Army’. Commanded by Sir Thomas Fairfax with Cromwell as his deputy, this force changed Parliament’s fortunes with a decisive victory at Naseby in Northamptonshire in June. A year later King Charles I was forced to surrender, being placed under house arrest whilst negotiations were carried out with him to come to a long-term political settlement.

With the fighting over in 1647, Parliament’s soldiers were owed pay and wanted indemnity for their wartime actions. They feared the army would be disbanded first, or that they would be forced to serve in Ireland (where fighting continued) far away from their families.

Inspired by Leveller pamphlets, some soldiers went further, demanding political reform. They felt that as they had fought for their country, they should have a say in its future government. In the summer of 1647 an Army Council was formed of senior officers, including Sir Thomas Fairfax and Oliver Cromwell, and elected representatives (‘Agitators’) of ordinary soldiers from each regiment.
Many Agitators worked with Lilburne and the civilian Levellers to produce a manifesto in October 1647, The Agreement of the People, demanding male suffrage, religious toleration, and a fair legal system. The soldiers also issued their own pamphlet The Case of the Army Truly Stated which
reinforced these radical ideas, as well as criticising negotiations between the generals and Charles I to find a compromise political solution.

To try and resolve the situation, it was agreed that the senior officers or ‘Grandees’ should meet the agitators to discuss the proposals. This meeting was held at St Mary’s Church in Putney in London at the end of October 1647. 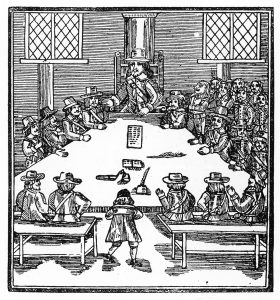 The Putney Debates
As Fairfax was ill, the meeting was chaired by Oliver Cromwell, with the case for the Grandees being set by Henry Ireton. The senior Leveller was Colonel Thomas Rainsborough.

The key debate was over who should have the right to vote. Rainsborough argued that all men were entitled to vote; Ireton said that this would lead to anarchy and that voting should be restricted to property owners. A compromise was reached so that the vote would be extended to include all men who had fought for Parliament, but Royalists, beggars and servants should be excluded. There was no suggestion that women should be allowed to vote.

Alarmed by news of the Debates and fearing that he might be assassinated, King Charles I escaped house arrest; immediately, the prospect of war put an end to the Debates, the generals deciding that the needs of army discipline overrode the Levellers’ radical ideas. A gathering of troops on 15 November at Corkbush Field led to a small mutiny by some soldiers, which was quashed by Fairfax and Cromwell. One of their ringleaders was executed as a warning to others.

The End of the Levellers?
Although King Charles was rapidly recaptured, Civil War broke out again. This meant that the Levellers kept a lower profile within the army, but their influence grew amongst the population of London. A petition to Parliament in September 1648 was signed by a third of the population of the capital. When Thomas Rainsborough was killed by Royalist agents, his funeral in London attracted thousands of mourners.

In January 1649 King Charles I was put on trial and executed; England now became a Commonwealth, a Republic run by Parliament. Almost immediately, Leveller leaders clashed with the new regime. Lilburne and others were imprisoned in 1649 for publishing a pamphlet England’s New Chains Discovered criticising Parliament for seizing power from the people.

Fearing being sent to Ireland as part of Parliament’s army under Cromwell, some soldiers mutinied in the spring of 1649, most famously in May at Burford in Oxfordshire. Several hundred Leveller mutineers were captured when Cromwell stormed the town; three of the ringleaders were executed by firing squad.

After this, the Leveller movement declined. Lilburne was imprisoned in 1653, Wildman in 1655 – whilst some Levellers led by Edward Sexby became involved with failed conspiracies to overthrow Cromwell once he became Lord Protector.

Leveller Women
At a time when it was taken for granted in a male-dominated society that women should have no formal role in politics, sadly there was no suggestion by the Levellers that the vote should be extended to them.

There were several women who did play a key role in the movement, including Mary Overton, Elizabeth Lilburne, and most particularly Katherine Chidley, a lay preacher, campaigner, and pamphleteer. In April 1649 Chidley and hundreds of other women gathered at Parliament, demanding the release of John Lilburne and the other Leveller leaders.

Find Out More
You can discover more about the remarkable story of the Leveller movement in a temporary display at the Cromwell Museum in Huntingdon until 2 April 2023. The exhibit includes surviving examples of the radical pamphlets produced by the Levellers to circulate their ideas and portraits of those involved. The exhibit is free of charge to visit during normal opening hours (11am – 3.30pm, Tuesday – Saturday). The Museum is also staging a dramatised reconstruction of the Putney Debates in the atmospheric surroundings of Huntingdon Town Hall on Saturday 25 & Sunday 26 February 2023. More details, tickets and bookings can be found on the Cromwell Museum website at: www.cromwellmuseum.org