One of the best-known companies to call Peterborough its home is the Thomas Cook Group. But its history stretches back much, much further, to the mid-19th century and the very advent of tourism. Richard Gunn talks to the company’s archivist, Paul Smith, about how it grew into the biggest name in travel

Such is the strength and status of the Thomas Cook Group that many Peterborough residents know exactly where its Peterborough headquarters is. Or, at least, they think they do. The imposing concrete office block that dominates the Thorpe Wood district of the city is still believed by many to be the centre of Thomas Cook’s operations, so much so that the nearby Soke Parkway/Nene Parkway road interchange is often still referred to as the Thomas Cook roundabout. The company moved there from London in 1977. But at the start of the 21st century, after it sold its Global and Financial Services division to Travelex, Thomas Cook vacated the building it had called home for almost a quarter of a century, so Travelex could move in instead. It’s still proud to call Peterborough its home, but it now occupies its own sprawling business park, to the north of Bretton, where it employs around a thousand local people.

The low-slung buildings may not have quite the lofty presence of the old Thorpe Wood site, but finished in the company’s corporate shade of dark blue, there’s no mistaking this is Thomas Cook territory. As modern as the current premises are, there are nevertheless important reminders of the company’s illustrious and wide-ranging heritage. When you enter reception, a display chronicles how Thomas Cook grew from a one-man band arranging railway excursions for sober-minded Victorians to one of the world’s leading travel conglomerates, complete with its own airline. It takes up an entire wall, and it needs to, given Thomas Cook’s fascinating 173-year history.

However, there’s also a more touching, personal artefact that many casual visitors won’t get to see. Around the corner from reception is a stained glass window, commemorating those employees who gave their lives during the First World War. As this year marks the centenary of the conflict’s outbreak, it’s something that Paul Smith, the man who looks after Thomas Cook’s archives, is keen to point out to The Business Moment during our visit. Rescued from the 1873 to 1924 London headquarters at Ludgate Circus, it was Paul who pressed for the early-20th century glasswork to be resurrected after years in storage. It’s a poignant reminder of the company’s important place in British history and how its continuing survival and success makes it one of the country’s great commercial success stories.

In addition to his religious beliefs, Cook was a keen advocate of the temperance movement, which was against the consumption of alcohol

The man responsible for the corporate dynasty that still bears his name was born in 1808 in Melbourne, Derbyshire. His working life started early – by the age of 10, he was an assistant to a local market gardener and at 14 he became an apprentice with a local cabinet maker. However, his strict Baptist upbringing proved more important, and when he reached 18, he started touring the area as a wandering preacher, becoming a full minister in 1828. ‘His rounds included Stamford and Barrowden, in Rutland, which is where he actually met and married his wife, Marianne, a farmer’s daughter,’ says Paul. ‘He also lived there for a little while before they got married.’ In addition to his religious beliefs, he was a keen advocate of the temperance movement, which was against the consumption of alcohol. 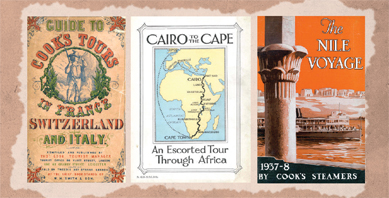 The first Cook’s tour
It was while walking from Market Harborough – where he’d moved in 1832 – to Leicester to attend a temperance meeting that he decided to plan his first excursion. With the new-fangled technology of railways spreading across Britain, he arranged for 540 supporters to travel from Leicester to Loughborough and back by charter train for a temperance rally in July 1841. The price was one shilling per person, including food, and Thomas received a share of the money. Encouraged by this success, he organised more trips and in 1845 put on his first one for genuine profit. This was a tour to Liverpool from Leicester, Nottingham and Derby, with the option of travelling to North Wales by steamboat. He also printed a 60-page booklet about it, which in many ways could be regarded as the equivalent of a modern holiday brochure. The following year he was even more ambitious and ran an excursion to Scotland from Leicester. Jaunts to Wales and Ireland soon followed and… [cont]