We all know about Oliver Cromwell – or, at least, we think we do. But how much is fact, and how much fake news? Moment Editor Toby Venables talks to Stuart Orme, Curator of the newly refurbished Cromwell Museum in Huntingdon about the man, the myth and why the reality is more fascinating than the fiction.

Tell me first a little about the building and its connection with Cromwell
The museum is based in this lovely medieval building, the oldest parts of which date to about 1160. It was funded by David, Earl of Huntingdon – a claimant to the Scottish throne and potentially a Robin Hood as well – and was originally part of a much larger monastic hospital run by the Augustinian canons. The high street would have been the Great North Road in those days, so you’ve got lots of travellers passing through, and this was literally a building to provide hospitality to them – to provide a meal and a bed for the night for those who couldn’t afford the taverns. 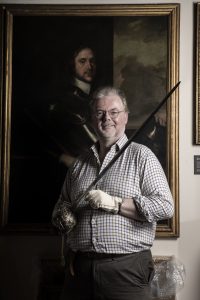 The reason the beautiful medieval front actually survived, oddly enough, is that during the Reformation sections of the building were pulled down and the building was converted into the local boys Grammar School – Huntingdon Free School for the Sons of the Freemen of the Town – about 20 schoolboys of mixed ages who were getting a classical education. Amongst the schoolboys who studied here was Oliver Cromwell, who was born just up the street, but also Samuel Pepys. Two famous old boys within a generation of each other. But at that time it was covered with brick cladding which had been added by the Tudors and which stayed until the Victorians restored the building, revealing the medieval stonework, so Cromwell would never have seen that medieval doorway.

When did it first become a museum?
It remained the property of the grammar school till the 1950s and then became the Cromwell Museum in 1962 under the local authority. In 2014, the with a budget cuts, the county decided they couldn’t afford the museum any more so they pulled out and it nearly closed, but fortunately with local support the museum was saved. It’s now become an independent trust. We’re self-financing although we do now get a small grant from Huntingdon Town Council, which is very helpful, and grant funding from a number of organizations which has allowed us to refurbish to make us more sustainable and more attractive to audiences in the 21st century. We’ve also got a brilliant team of volunteers, the lifeblood of the museum. We simply wouldn’t survive without them.

How did you first become involved?
I started here two years ago. They decided they wanted a full time curator to drive things forward, and it was a case of right time right place for me. One of the first things we did was sit down and talked with the trustees, the volunteers, local people and other stakeholders, saying OK, what do we want the museum to be? One thing we all agreed was that we wanted to refurbish the existing space. And we were very lucky that at the time there were a number of grant funds that were available for application that suited this sort of project. So this time last year, we knew that we’d got a project together and it was like. OK, now, let’s get on with it! 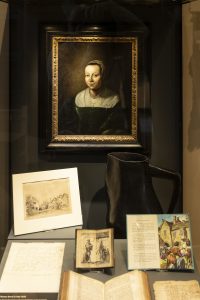 What was it like at that point?
The museum was well loved by people locally but hadn’t been refurbished significantly since 1989. It had dark wood panelling on the walls and green carpet tiles that had been added in the 80s. Under those we discovered a mahogany floor, so we’ve uncovered that and taken the wood panelling off to make the building lighter, and then set about redisplaying everything. What we’re doing now is having a separate shop area, a new welcome desk, and the cases set around in such a way that actually we’ve increased our display space by about 40%, and there’ll be about 15% more objects on display. You’ve got drawers so that you can see more objects, and they’re the right height now for accessibility. We’re using audio-visual so we’ve got TV screens in the cases, and there are projections onto the screens above – so this one here has footage of one of the Sealed Knot’s re-enactments. There are also various images of Cromwell on display – and imagery is quite important because of this whole idea about him being presented ‘warts and all’.

What’s the story behind that?
It’s connected to the famous portrait of Cromwell by Sir Peter Lely, which hangs here. It is reputedly the one where Lely said: ‘How would you like to be painted?’ and Cromwell replied: ‘Mr Lely, I desire that you would use all your skill to paint my picture truly like me, and not flatter me at all; but remark all these roughnesses, pimples, warts and everything; otherwise I will never pay a farthing for it’. So ‘warts and all’ is a slight misquotation. But ‘warts and all’ sounds better!

Has it changed your view of Cromwell, working here?
Yes. I think he’s a much more complex individual. Our job is not to be his fan club. Some people are slightly surprised by that. Some museums or historic houses, where they’re associated with particular writers or poets, become almost like shrines to them. That’s not our job. For example, we’ve got a display about his Irish campaign. It’s an important part of Cromwell’s story and one of the controversies about him. It’s also about Cromwell as an individual, so there is a letter that’s going on display for the first time, written in 1652 to an unknown male friend, which is basically describes one of his periods of depression. He’s talking about the fact that he’s feeling isolated, lonely, all his friends are away, he feels he doesn’t know his purpose in life or in the world. We tend to think of mental health issues as being a modern phenomenon, but anyone who has suffered any sort of depression will recognise the language he is using here. Cromwell was diagnosed in 1628 with what they called melancholia, and had periodic bouts throughout his life. 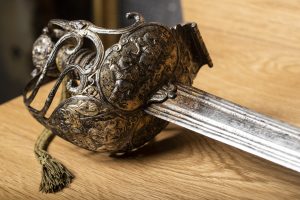 What other key possessions of his will be on display here?
There are four swords in existence which can be provenanced to belong to Cromwell and we have three of them. We also have an impressive felt hat that belonged to him – and is reputed to be the hat he wore when he marched into Parliament in 1653 and threw them all out. There is also Cromwell’s personal medical chest which he would take with him on his travels and use to mix his own medications. From the middle of his life he contracted what they then called the ague and we call malaria, which may seem bizarre, but actually was quite common in this part of the Fens.

Do you feel people are a little too keen to classify him as either a hero or a villain?
He’s one of the most divisive figures in British history, because of those campaigns in Ireland because of the execution of the king, but he also has a lot of things that were hugely admirable. He introduces the greatest period of religious toleration there had ever been in this country up to that point – and it would remain that for another 200 years. You get established churches, freedom for nonconformists, you get the arrival of Quakers, the Baptists come out of this period, the Jewish community is allowed back into England for the first time in 400 years. Even Catholics in England are allowed a measure of freedom. And ironically the clock is turned back as soon as the Restoration happens. There’s a huge amount of mythology about him as well. I mean, we tend to think of him as a dour a black-clad individual who’s a bit of a party pooper. That doesn’t match up with the accounts of the people who met him at all. There are no contemporary portraits of Cromwell wearing black; the person you most commonly see wearing black in contemporary portraits is actually Charles I! The idea of Puritans dressed in black is Victorian misreading of 17th century portraits. Cromwell is always either depicted in armour, which obviously is to show the military strong man, or he’s depicted in fine clothes. So, we’ve got a portrait of him in a grey velvet suit, which we know he wore to his daughter’s wedding the year that painting was done, in 1656 – where apparently he got horribly drunk, danced quite a lot and ran around playing practical jokes and taking off peoples wigs! 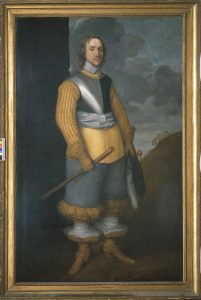 There’s another portrait, which we’ve had restored, which we have deliberately placed so it’s the first thing you see as you come in. It was painted in 1649, shortly after the king’s execution, and is him as a cavalry general but in quite elaborate clothing – what I call the ‘dandy’ portrait. Then, on the glass case, we’ve used words, both positive and negative, that have been used about him. Our job is to help visitors make their own minds up about him, but the one thing I always say is you can’t put him down as either a hero or a villain – history is not about black and white, it’s about shades of grey. And it’s about different shades of grey at different points in people’s lives as well.

That’s what actually makes history so much fun, it is complex, and it’s red in tooth and claw. It’s about real human beings making real decisions. And even though they may be separated from us by different cultures, different moral values and hundreds of years, actually, there are things that we can still identify with in them.

And that’s why places like this are important, because they present that warts and all…
Yes – and because they offer a unique connection with real objects. They might be behind glass, but they are real, physical artifacts that are connected to that person, it’s not just something that’s abstract in a book, or on a TV screen or on the internet. It’s the real thing, and that’s not an experience you can get anywhere else.