This summer, at historic Burghley House, cutting-edge technology meets traditional painting techniques to create a stunning and unique art experience. UK-based film and immersive production company, Fat Red Bird, is launching a new VR episode of its (Hi)Story of a Painting series franchise, co-created by artist/filmmakers Gaëlle Mourre and Quentin Darras, and narrated by Welsh musician and author, Cerys Matthews. This latest episode, ‘The Light in the Shadow’ focuses on the turbulent life of female Baroque artist Artemisia Gentileschi, whose painting Susannah and the Elders – celebrating its 400th birthday this year – is one of the jewels in the crown of the Burghley art collection. To mark the occasion, The Moment talked to Burghley House curator Jon Culverhouse, to discover more about Artemisia, her life, and her extraordinary art.

Susannah and the Elders is a painting that is known and admired worldwide, and regularly features in international exhibitions – but what is its history with the House?
It came originally from the Barberini Palace in Rome and was purchased by the 9th Earl of Exeter in 1763 when he went to Italy on one of his two Grand Tours, when he bought very large quantities of very expensive and exotic fine art. Artemisia was a much respected 17th century artist who became very popular – and notorious, in fact. He admired it immensely and probably bought it with the aid of a man named James Byres who acted as agent to many of the aristocratic travellers in those days.

We talk about ‘Old Masters’, which is indicative of the fact that the vast majority of them were men. How unusual was it for a woman to be working as an artist at that time?
The Italian art world didn’t exclude women. There are one or two famous women painters – Anguissola is another example – but not very many. It wasn’t perceived as a very acceptable career for a young woman and if it was followed, it tended to be that they were rather limited in their subjects. Artemisia, however, was a full-blown artist, who chose what she wished to paint and wished to sell.

What was her artistic lineage?
Her father was a great artist called Orazio Gentileschi. He painted in Rome, working primarily for the nobility. He came to England at one point, and painted for the King’s first minister, George Villiers, 1st Duke of Buckingham, and for the royal family themselves – and, in fact, spent the rest of his life here. So, he was a very well-known and great Italian painter – and her father purposely educated her as a painter, too.

Wasn’t there a time when this painting was believed to be that of a male artist?
It had been suggested that our painting was by Caravaggio, but when it was cleaned to go on exhibition in America in 1991 Artemisia’s signature was found, so it was finally confirmed as being by her – and it’s important to say that it was bought as being by Artemisia.

What made people think that it was Caravaggio?
Simply the style, and the use of light. Caravaggio was one of the great protagonists of that style, and people tended to lump everything into his workshop if they weren’t quite sure. It was purely the opinion of one or two visitors who saw it in the 19th century and thought it was by Caravaggio – but these things happen all the time. Paintings like this go back and forth in authorship over the years and are always in question unless you actually have the signature or a bill.

Was her art regarded differently at the time because it was by a woman?
It probably would have meant that her work had a certain amount of curiosity value, but her sales really lived and died on her skills. Patrons of art in Italy – and in Venice and Rome especially – had a huge choice of wonderful studios to buy from, so you had to be good. She was very good – a remarkably good painter. This painting is one of the greats of our collection, definitely.

She nonetheless had some major challenges in her life…
Yes. In 1611 – a decade before she painted our Susannah – she was raped by an artist called Agostino Tassi who was lodging in her father’s house. And very unusually, she and her father decided to prosecute the case. It went to trial – and was the kind of thing the tabloids would have loved. The process for a woman bringing a charge of rape involved delightful techniques such as torturing the poor person to find out if she was telling the truth – which they did. Just horrendous. Unusually for the time, the judge pronounced in her favour. Agostino Tassi just received a very lenient sentence, being exiled from Rome and fined a small amount of money – but it was no punishment, really. I think Artemisia herself would likely have come out of it with a fear and disgust of male affection, and a profound dislike of court procedures.

How did this experience – and that of simply being a woman in a patriarchal world – influence her art?
I think with Artemisia she rather cleverly turned it to her own advantage. It was notoriety – people would have talked about it and gossiped about her – but that doesn’t necessarily damage sales, particularly if you’re good and producing stunning work. During her life she painted quite a few subjects involving females being taken advantage of. One other subject who was a victim of a male attack was a biblical figure called Judith, who seduced, made drunk and then killed an amorous enemy general called Holofernes by cutting his head off with the aid of her handmaiden. It’s one of Artemisia’s most famous paintings, and she portrays the woman and her handmaid in the actual act of decapitation. It’s a violent painting, but it’s wonderful. That was her making use of what people knew her for. But it sold paintings. Her court appearance had added to her fame, and no doubt she cashed in on that. Painters at the time, one must always remember, weren’t painting for the fun of it, or for the love of it. They were painting to live. If you look at the Old Master group in Italy from the 15th century onwards, they were busy artisan workmen. I mean, they were painting cathedrals, they were painting chapel ceilings, altarpieces… They were workmen – or perhaps supervisor workmen if they were at the top of their profession. And they were working very hard. Some might have been able to survive without customers if they had independent wealth, but most needed to be selling their work, and they only achieved that by being good and by attracting the right patronage. And if something sold a painting – your reputation, your notoriety – well, fine! You might not enjoy it, but that’s what sold.

How regularly is it loaned out to other museums and exhibitions?
I should think in the last 10 years it’s spent more time away from Burghley than it has spent here. I can think of 10 exhibitions it’s been to in that time! To the point where when it comes home in 2024, from yet another exhibition, I think we’re going to put a stop on it for a year or two. It’s becoming too popular!

What, to your mind – and your eye – makes the painting great?
I think, really, the amount of feeling that she gets into it, the look of obvious distress on the girl’s face. And the fabulous treatment of her robe that’s draped over her. That is beautifully painted. It is a beautiful thing to look at. It’s got a certain amount of eroticism in it, but not as much as many of the great paintings, which were really the mild pornography of the day. This isn’t intended to be that at all. It is making a feminist statement. It does say something, which is why it’s been in exhibitions so much over the last few years, and why Artemisia has become a feminist icon.

‘The Light in the Shadow’: Creators’ Statement

(Hi)Story of a Painting was born from our desire to share our passion for stories, art, and learning, and to include as many people as possible in the process.

Art and art history are often seen as inaccessible for myriad reasons, and yet, understanding art is essential to understanding a culture and how the past has shaped the world we live in today. Most of us don’t know why one painting or sculpture is important, and we walk right past them, not knowing there’s likely a fascinating story behind it! 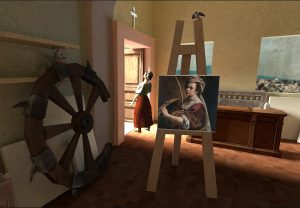 And that couldn’t be more true of our episode ‘The Light in the Shadow’, which focuses on Artemisia Gentileschi’s work and life. Discovering her story, and the detail behind her composition and technique, is an eye-opening and inspiring experience.

Nothing will ever replace viewing an artwork in person but the pandemic has brought to light a longstanding truth: not all of us get to travel in the best of times and so how do we get to experience the world’s wonders, locally? Virtual Reality was our answer: viewing art and learning about art and art history in VR is the next best thing, if we may say so ourselves! We’ve gathered an unprecedented collection of Artemisia’s work into a single experience, where each viewer has the opportunity to admire Artemisia’s work in their own immersive world.

One special piece in the experience is Burghley House’s very own Artemisia Gentileschi painting: Susannah and the Elders (see if you spot it when you experience ‘The Light in the Shadow’!) It’s such a treat to get to show our piece in as remarkable a place as this, one that offers viewers a rare opportunity for holistic immersion. To start the transition from the physical world into the virtual world before even putting on a headset is integral to a rich VR experience and Burghley House naturally allows for this – the history, architecture and magnificent scenery create a wonderful sense of displacement. 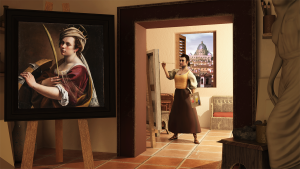 Showing ‘The Light in the Shadow’ here is also personally very meaningful to us. We shared our script with Jon Culverhouse late last year and his encouragement was like rocket fuel, and is what eventually led us to this collaboration with Burghley House.

We’re so excited to be launching ‘The Light in the Shadow’ in the UK at Burghley; we can’t wait to share it with Burghley’s visitors!

The Light in the Shadow @ Burghley House