It is 35 years since The Commitments first burst from the pages of Roddy Doyle’s best-selling novel. The world’s hardest working and most explosive soul band are set to return in an all-new stage production, arriving at the New Theatre in Peterborough on May 15, 2023. And no one could be happier than its creator, Irish writer Roddy Doyle.

The original stage show of The Commitments in 2013,’ he says, ‘was a brilliant experience from my point of view. It stayed in the West End for over two years. Then it went on a successful tour.’

Nigel Pivaro, erstwhile lovable rogue Terry Duckworth in Coronation Street from 1983 to 2012, will take the pivotal role of Da, Jimmy Rabbitte’s father, while Andrew Linnie, sax player Dean in the original West End production and then Jimmy Rabbitte himself on tour, will be directing.

For the original West End production, Roddy lived in London for 12 weeks, attending rehearsals every day, doing daily rewrites. ‘I attended every preview and then the meetings the next day as we discussed what was and wasn’t working. My role this time ‘round has been less vital, although sitting in on the read-through with the new cast was just terrific.’ 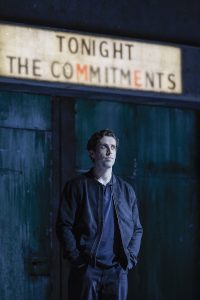 He’s not counting his chickens, but if the reception to this latest production is anything like the way it was greeted almost 10 years ago, he’ll be a happy man. For the Sunday Times, “A sweet-soul, solid-gold, five-star blast.” The Telegraph declared it “touched the sublime”. And The Times deemed it “unstoppable fun”.

Has he felt emotional returning to this first work of fiction? ‘It’s brought back a lot of memories, yes. I was a geography and English teacher at the time when I wrote the novel. I wanted an excuse to bring a bunch of young people together in book form and capture the rhythm of Dublin kids yapping and teasing and bullying.

‘But I needed to find a setting outside school and that’s when the idea of a band came to me. A big band with a brass section and backing vocals as opposed to three or four young men that was the norm back then.’

Roddy has resisted the temptation to update the action. ‘The vibrancy is still there but so is the tension caused by lack of communication. For instance, will Deco, the obnoxious lead singer, turn up on time? These days, you’d track him down on your mobile in no time at all. But there wasn’t that option in the late ‘80s. And I chose ‘60s music – Motown and Memphis soul – because, at the time, it felt timeless. Thirty-five years later, I was right.’

For a long time, Roddy was a teacher who wrote on the side. ‘I loved teaching, and the holidays were great, a time when I got into the habit of writing. I wrote The Commitments in 1986, it was published the following year and I was working on the screenplay in 1988. But I was still teaching up until 1993.’

The Snapper and The Van followed in 1990 and 1991 respectively and, along with The Commitments, make up what is known as the Barrytown Trilogy. Then, in 1993, Roddy hit the jackpot. His novel, Paddy Clarke Ha Ha Ha, about a rumbunctious 10-year-old living in a quickly-changing north Dublin suburb in 1968, won the prestigious Booker Prize. Roddy was 35.

‘I was delighted. It was a great compliment although I can’t remember what I said in my acceptance speech. But I do recall then being taken away to be interviewed when all I really wanted to do was get back to the table and share the moment with my wife and publisher.

‘But it felt as if I’d instantly become public property, and I didn’t like it. What I wanted more than anything was to go back to Ireland and live as near a normal life as possible. I deliberately continued to use public transport, for example. But now, almost 30 years later, I can take it in my stride.’ 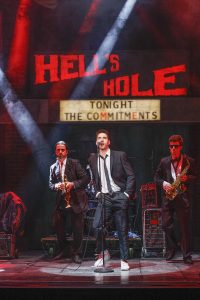 Pick up any of the early books, in particular, and you could almost be reading a screenplay. ‘That’s true. I think that the best way of establishing characters is to get them talking. That’s especially true of The Commitments – and it gave me a template which I used for some years. The fact is, we talk a lot in Ireland.’

He has an attic office in his home where he writes. But, since the lifting of lockdown, he’s acquired a room in the city centre where he’ll also write. ‘At one level, I was asking myself why I’d want another office.

‘But it struck me as a good idea to get out of the house and walk around and experience Dublin opening up, coming alive again. It’s been really interesting. Also, my children are grown up and are no longer living at home. So I’m not surrounded by the rhythm of their speech.’

His is a disciplined approach to work, usually writing from nine until six each day. ‘But I’ve become a bit more relaxed as I’ve gotten older. There’s nothing quite as nice as going to see a film at the cinema in daylight. And, I never don’t feel guilty.’

Whatever came afterwards, The Commitments will always hold a special place in Roddy’s heart for the simple reason that it was his first published book. But he’s fond, too, of The Woman Who Walked Into Doors. Who can forget the moment when the narrator, Paula, after a litany of domestic abuse, realises that her husband, Charlo, has been interfering with their daughter – and brings down a frying pan on his head?

‘I’d found it really hard to write in the first person as a woman. It took a long time to find Paula’s voice. I also had little or no experience of violence or of physical pain. But into the second year, it began to flow really well.’

Even so, he worried whether he’d written something authentic. In 1994, he’d written a four-part series called Family for the BBC which featured Paula and her immediate circle. ‘When it was broadcast in Ireland, it caused an absolute storm. It was condemned by the Catholic church. Where were the songs from The Commitments? Where was the laughter? There wasn’t any.’

Then he was contacted by Women’s Aid, who’d heard he was writing the book. ‘When I’d finished, I gave them the manuscript which they then distributed among ten women who’d been through abusive relationships.

‘A few weeks later, I went to a meeting to listen to their reaction to it. I sat down, the only man in the room, and kind of held my breath. The person in charge asked if anyone wanted to say anything. “Yes,” said the woman in front of me. “How did you get inside my bleeping head?”

‘It’s the best review I’ve ever had in my life.’

At 64, Roddy remains prolific with twelve novels, three collections of stories, eight books for children, a book he co-wrote with Roy Keane and, of course, a stage musical under his belt, so retirement seems unlikely. He was once quoted as saying that he hoped to die mid-sentence.