...returns to the Tolethorpe stage this summer when Stamford Shakespeare Company finally presents its postponed production of William Shakespeare’s Romeo and Juliet. The production was well into rehearsals, the set had been built and many of the costumes had been made when the pandemic hit in 2020 and the Company was sadly forced to close its doors

It had been hoped to include the production in the 2021 summer season, but the restrictions and social distancing meant it was impossible to perform such a passion-charged play. So, production of the costumes was halted and those already completed were mothballed. The set was given a coat of paint, to help seal exposed wooden edges, then it was covered over to protect it from winter weather. 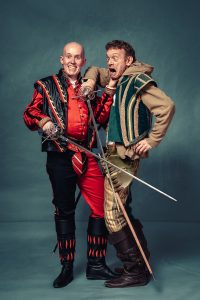 Now, at last, everyone is back working hard to produce Shakespeare’s immortal tale of star-crossed lovers. The beautiful Early Renaissance period costumes are being finished off and the set will soon be brought out of storage and any damage caused by two years’ worth of weather will be repaired. In a few weeks’ time the set painters will move in and help transform the bare wooden and plastic set into a late 15th century Italian street scene, complete with requisite balcony. The cast, who have been waiting so patiently, are back in the rehearsal room once more, working their socks off. A few of the roles have been recast as some of the younger members of the cast have moved away and are now at university, and one role has been recast for the saddest of reasons. Nigel Kuhn, who was to have played Lord Capulet, tragically passed away two weeks after the end of last year’s season, having spent the summer playing Jim, the gardener, in Charlotte Jones’ Humble Boy.

The show is directed by long-serving Company member Sally Franklin. Sally, the daughter of founder member Chris Coleman, joined the Company as a young girl in 1969 when productions were still being staged at The George Hotel in Stamford. After university Sally returned to the company, now based in the grounds of the newly purchased Tolethorpe Hall, joining the cast of Richard II. Over the years Sally has appeared in leading roles in many productions, including playing Juliet twice, the latter of which she appeared opposite Mick Franklin playing Romeo. This was a case of life imitating art, as, though the show ended, the love carried on, and Sally and Mick were married in 2013. This time round, Mick has graduated from playing the young lover to become the kindly and wise Friar Laurence.

Bringing fresh ideas to such a well-known and well-loved play is always a challenge, but it is a challenge Sally relishes. Her vision for this production sees the cast transforming from modern day tourists in Verona to the familiar characters of Shakespeare’s play.

“Although Romeo and Juliet is a tragedy,” says Sally, “my sincere hope is that my production will not be bogged down in its tragic events. Shakespeare’s plays are so wonderful because comedy, tragedy, pathos, and humour sit comfortably side by side in all of them, and none more so than in Romeo and Juliet. The first half, particularly, will have a lightness of touch, and be full of joy, humour, and excitement. It is set about 100 years before Shakespeare’s time, and the costumes by Miriam Spring Davies are truly spectacular, so I know it will be a visual feast. I hope the modern twist will intrigue the audience, but mostly I hope they will be swept along by a cracking story that has been well told.”

After a two year wait, the Company is determined to produce a top-class show, filled with passion, bloody revenge, bawdy comedy, thrilling swordplay and, of course, some of the most beautiful language ever written.

Alongside that production will run three more fantastic shows: Spider’s Web, a comedy whodunnit by the ‘Queen of Crime’, Agatha Christie, which is sure to delight and entertain audiences of all
ages. Following on from the astounding success in 2019 of Noel Coward’s Blithe Spirit, this year the Company is presenting his wonderful comedy Hay Fever, full of brilliant prose and scintillating wit. Finally, Tolethorpe Youth Drama Theatre Makers present an exhilarating version of William Golding’s modern classic, Lord of the Flies.

With so much great drama on offer, Stamford Shakespeare Company looks forward to welcoming back full-capacity audiences once again. The theatre is situated at historic Tolethorpe Hall, just two
miles from Stamford. Enjoy a picnic in the glorious grounds, then take your seat, protected from summer showers, and see a stage like no other. The performances take place throughout the summer (7 June – 27 August).