Andrew Reid, 40, has been Director of Music at Peterborough Cathedral since 2004. He previously held posts at both Westminster Cathedral and Westminster Abbey where he played the organ at the funeral of the Queen Mother in 2002 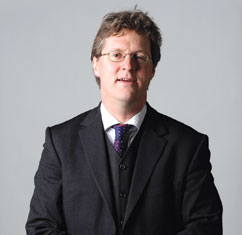 Why did you decide to take up the post of Director of Music at Peterborough Cathedral?

I applied for this job because it involved running the music at the cathedral, as opposed to being an assistant, which is what I did previously.

And what exactly does your role encompass?

I run the cathedral choir and I direct the music at the cathedral, which really means the music of the services. I am involved with some of the concerts but not all.

How important is music in the overall life of the cathedral? Is it central to it?

Yes, as it is in most Anglican cathedrals. Without music, the big spaces would seem very empty and we would probably have fewer people visiting if we didn’t have such a strong musical tradition. Music is one of the things that lures people into a cathedral, as opposed to their local parish church.

Has it played a central role ever since the cathedral was built?

Yes. Even before the cathedral was built – when there used to be a monastery here – the key services were sung by monks. And then, in the 14th and 15th centuries there grew a tradition of more elaborate choirs which sang in parts, and professional singers would be employed for some of the masses. During the Reformation, those professional resources became the cathedral choir which sang at the morning and evening offices (services). That’s how our choir started.

Has music become even more important to the cathedral in recent years? There seem to be a lot of new musical initiatives taking place.

We’ve been more aware, in the last eight years or so, of Outreach – that is, to make what we’re doing more accessible to a wider constituency. So that might be making CDs, touring with our choir, putting on concerts to bring a different group of people to the cathedral, or it might be working with schoolchildren. We also have the Festival Chorus which is a group of adult amateurs that sing with the cathedral choir in concerts.

How good are the acoustics in Peterborough Cathedral?

The great thing about the acoustics in Peterborough Cathedral is the clarity. You can really hear words easily and it’s not oppressive because the feedback you get from the building is not too strong, yet there is still plenty of sound after you’ve released the chord.

Do you have big musical plans for the cathedral’s 900th anniversary in 2018?

There are plans to increase facilities in various ways. The first is to create a new song school and music centre so we can do a lot more of our Outreach activities from premises that have been specially designed for that purpose, rather than using existing old buildings. There’s also a plan to take the pitch of the organ down to one that would work with other instruments, orchestras, and bands. So that will be another fairly large cost. Then there’s a desire to have a concert grand piano in the cathedral and to increase the back row of the choir – that’s the professional adults – to enable us to be stronger and perform a wider range of repertoire. In terms of looking ahead to 2018, it’s about resourcing ourselves so we can meet the needs of what we see coming up in the future.

How can people get actively involved in the musical life of the cathedral? Do they have to be trained before joining a choir?

They have to be trained to join the adult cathedral choir – these are paid posts which are advertised in the national press. But anyone can apply to join the Festival Chorus via our website (below). That is a part of the PCMA (Peterborough Cathedral Music Association) which people can also elect to join and help support the concert series that we run. In terms of children, we also audition every year for new members of the choir and we’re looking for children in year two to audition in late November so that they can start in the choir at the beginning of year three. 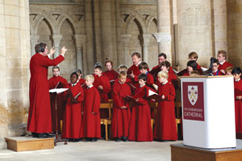 What’s the most gratifying part of your job?

I guess when you work at things with the choir and it finally comes off. That’s particularly true with children because you are enabling them and revealing new things to them all the time so when they understand these new things and take them on board, that’s very gratifying.

And the most challenging aspect of your position?

It’s a big thing that we’re doing, overall, and there are a lot of changes at the moment so that’s quite a challenge because there’s always stuff to be doing.’

If you want to get involved with any aspect of the musical traditions at Peterborough Cathedral, visit www.peterborough-cathedral.org.uk and click on the ‘Music’ link. Alternatively, call 01733-355318 or email