Philip Blom’s seminal work To Have and to Hold, gives a fascinating and detailed historical account of some of the greatest and idiosyncratic collectors in the world. I wonder what he would have to say about the psychology behind bear collecting (arctophily) and the relationship between the bear maker and her creations?

I have drawn my own conclusions about how ‘Down to the Woods’ bear artist Sally Knibbs connects with her own hand crafted ursine friends. Her story touched my heart; the self-doubting, untapped child who grew into an assured and creative adult and transformed an erstwhile troubled past into current success and future aspiration.

Sally didn’t have toys as a child and discarded her only three bears along with unhappy memories. Eight years ago however, inspired by a close friend, she began to regain her childhood and rebuild her dreams. This was symbolically marked by the purchase of her first bear Fern, which grew into a passion for bear collecting.
But how does a bear collector become a bear artist? Bizarrely for Sally, her decision to make bears was an economic one. Instead of purchasing bears – an expensive affair for any collector – it was suggested she make them. She bought a book, attended fairs and observed numerous demonstrations. Her very first handcrafted bear sold for £12. ‘I was completely exhilarated by this sale and it was the real turning point for me’ she explains. 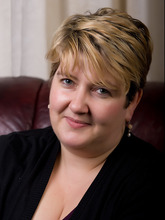 ‘I acquired specialist tools and soon realised the technical and artistic expertise required to make truly beautiful handcrafted bears. I began to challenge myself by making small bears, then smaller and smaller . . . they were so irresistible that people kept buying them. One lady bought well over a dozen, one after the other. She told me she needed to buy my bears quickly before I became famous’ she laughs.

‘You see in those days it was enough that my bears were loved. My prices were low and the money mattered little. However, I soon felt insecure about my treasured bears and decided to stitch in my Down to the Woods tags. I also started to realise their artistic value and knew that they merited exhibitions and galleries. My bears rekindled belief in myself and I was aiming high. I participated alongside fine artists in local Artists’ Open Studio events and last year I exhibited and sold at one of the Hugglets Festivals in Kensington Town Hall. This year I was awarded the national prize winner at the New Forest Teddy Bear Festival. This was the absolute pinna 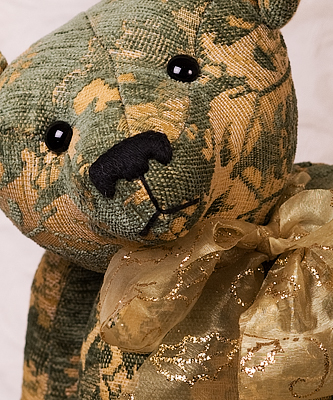 cle for me in so many ways.’

There is often surprise, at least intrigue when Sally presents her bears as an art form. But there are people who make bears and there are bear artists: there’s a big difference!
Sally creates one-of-a-kind bears, although she still produces many variations on the original bear, Tanner, her trademark. She names most of her bears after British woodlands, often scanning old maps in antique shops for inspiration. ‘Bear creating is a very tactile process,’ she explains. ‘As I feel and peruse a fabric, the bear is born in my mind; the size, the look, the demeanour, and eventually the name. A fabric has got to be good to feel in the same way that a bear has to be good to hold. Then there is the detail: the making of the pattern with its tweaks and subtleties; the traditional techniques of hand stitching and cotterpin joints; the different forms of stuffing including steel shot weights. This is all crucial for how the bear sits and feels and is another way of developing his character.’

The most vital and most time consuming ingredient for a desirable bear however, is the positioning of the eyes and ears.

‘His character emanates from his eyes and his ears. Sometimes I make them deliberately askew to mirror the imperfections of mankind.’ 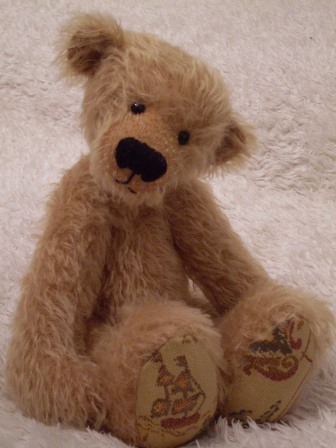 Sally intends to live her ultimate dream: her very own small specialist bear and tea shop in a remote idyllic part of the UK, where enthusiasts would have to make a special effort to visit. With a hint of poetic justice, Sally was raised in the upstairs of an old sweet shop just opposite Harriets Art Gallery, Cumbergate, Peterborough, where her bears can be viewed and purchased today. As a child she would often pass this listed building on her way to school. Her bears have come home.