One of Peterborough’s great historic treasures is Longthorpe Tower but until this year, opportunities to visit it were limited. RICHARD GUNN talks to art historian and TV presenter Dr Janina Ramirez about its significance 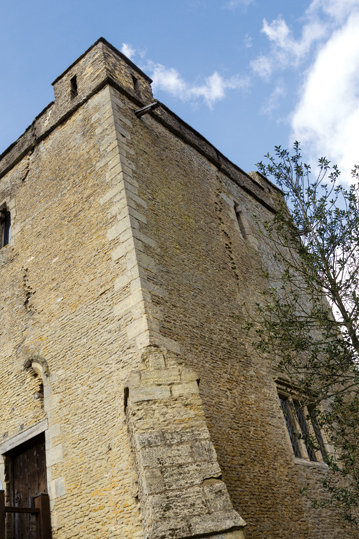 We’ll start with a question. Where would you expect to find what some experts consider to be the finest domestic medieval wall paintings in Europe? Perhaps one of the major historic cultural centres such as Florence or Córdoba or maybe one of the great ancient capitals such as Paris, London or Rome? Actually, it’s a lot closer to home for, somewhat incongruously situated in what is now suburban Peterborough, beside the road linking the railway station with Thorpe Wood police station, stands the 14th century Longthorpe Tower. And inside is an extraordinary collection of lavish wall decorations, without equal in the UK. Only rediscovered about 70 years ago, they have remained one of the city’s best-kept secrets, only seen by very few people, despite being recently voted among the 100 most important historic sites in the country. However, with the takeover of the tower’s management from English Heritage by Vivacity, the charitable trust that runs Peterborough’s culture and leisure services, the doors of the tower have been thrown more widely open and the artistic creations inside can now be appreciated by the public every weekend up until October. 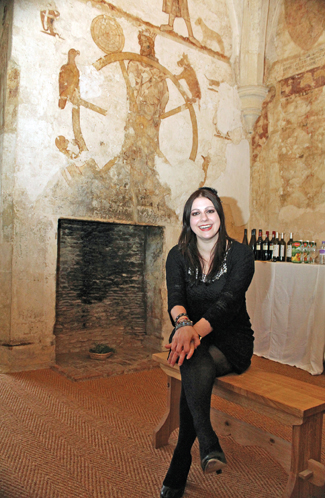 The tower was officially re-opened by Dr Janina Ramirez, the Oxford art historian and presenter of the fascinating BBC TV series Illuminations: The Private Life of Medieval Kings. Despite her interest in, and expert knowledge of, the art of the middle ages, it was her first visit to Longthorpe and she freely admitted to being ‘like a kid in a sweetshop’ when confronted by the 700-year-old illustrations: “I’ve obviously read about the paintings,” she explains. “But there’s no comparison to actually encountering them in the flesh. It’s been a wonderful experience, walking through the door and seeing them, and getting a sense of the scale of them. When you see them reproduced in books or on slides, they don’t carry the power of actually encountering them in that space. I am thrilled.”

It is that scale that is one of the most breathtaking things about the pictures. In a country with such a long, rich history, remnants of the medieval world aren’t that rare, and we perhaps take them for granted. But most decoration of this type is fragmentary, incomplete or faded to the point where it’s difficult to make out any real detail. Longthorpe is very different. The paintings – a combination of biblical, moral, didactic and secular subjects – stretch up all four walls of the ground floor main room and meet on the arched ceiling. Although some of the vibrancy of the colours has been diminished over the 700 years since they were done, and there are areas that have been damaged or rubbed away, the overall scheme is largely complete and still tell the stories that their artist(s) intended them to tell when they were created back in the 14th century. They have been described as a kind of ‘spiritual encyclopaedia’, taking their inspiration from illuminated manuscripts of the same era. 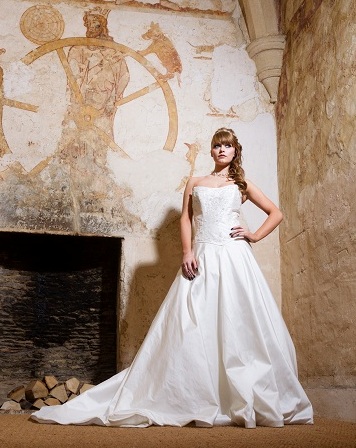 A few images especially stand out. On the north wall is a Wheel of Life, a representation of the seven ages of man, from the infant in its cradle, through childhood with a ball and whip, youth, manhood, middle age, old age (a figure clasping all his life savings in a bag) and finally the decrepitude of a stooped person supported by two walking sticks. Around the main door are Les Trois Vifs and les Trois Morts (the Three Living and the Three Dead), a morality scene intended to make those entering and exiting the tower contemplate the emptiness of earthly rank and materialism. There’s even a bit of what is presumed to have been political lampooning, with a Bonnacon emblazoned above the staircase to the top of the tower. And if you’re wondering what a Bonnacon is, it’s a mythical beast that defends itself by firing flaming poo – never let it be said you won’t learn something new at Longthorpe Tower! However, the picture that dominates the room, and is truly the building’s crowning glory, is the Wheel of Five Senses, above the main fireplace. It is a unique illustration, portraying taste (a monkey), smell (a vulture), touch (spider’s web), hearing (boar) and sight (cockerel), with a kingly figure behind it probably representing reason or intelligence. Next to this is a seated King, either Edward II or Edward III, as the pre-1340 coat of arms of these English sovereigns adorns the wall next to them. This changed that year when Edward III laid claim to the French crown as well as the English one, by adding the fleurs de lys of France to the English Royal arms. Prior to this, the shield only had the familiar three lions on it.

The best collection in western Europe

This helps pinpoint when the paintings were carried out and how remarkable their survival over such a long time is.

“I think, in terms of the date of them, completed before 1340, for their period they are the best collection in western Europe,” believes Janina. “There are places where you can see smaller examples of painting that are better preserved, but they only really give you a glance of one fraction of a scheme, whereas here you get the full picture and you can see how all the different parts inter-relate, the different themes and stories, the number and animal symbolism. It’s all there.”

The man responsible for building Longthorpe Tower around 1300 was Robert de Thorpe, a member of a local family that rose to prominence in the area through its associations with Peterborough Abbey. The tower was a status symbol, tacked onto the existing de Thorpe fortified manor house in the same way a modern social climber might build a posh conservatory or a two-car garage. Both Robert and his son – who went by the same name – were stewards of Peterborough Abbey and either Robert Senior or Robert Junior would have been responsible for commissioning the paintings, perhaps using artists doing similar work at the abbey. Changing fads resulted in the paintings being whitewashed over around the time of the Reformation.

“It seems staggering that you would paint over such artwork, but it’s down to fashion and taste, and the paintings themselves would have deteriorated over time. They would have needed touching up and unless the person who continued to inhabit the building wanted to stick with that fashion, after 50 or 100 years they would already be out of date,” explains Janina. “So it was a result of changes of taste and wear and tear, good old-fashioned reasons for a bit of a spring clean.”

Thus the paintings disappeared from view, hidden and forgotten about until the mid-20th century. Then, in something reminiscent of a Dad’s Army episode, the tower passed into the hands of the Home Guard during World War Two and, one day, a careless volunteer clouted one of the walls with his rifle butt and revealed a sliver of long-lost artwork underneath. Larger sections were discovered by the tenant, Hugh Horrell, when he prepared to redecorate after the war ended. The whitewash came off to reveal the secrets that Longthorpe had been keeping just to itself for the past 400 years. “It’s these chance discoveries that bring history to life,” says Janina. “I get very excited by such things. There’s obviously history and heritage in this site, it’s part of an important complex, but those paintings being there… who would have known?”

That Longthorpe Tower is now able to show off its medieval glories to a far greater audience than ever before is something that delights Janina. “I get very frustrated by all these things locked away – manuscripts locked away in libraries, treasures locked away in museum stores, and historic buildings not being open to the public. This tower has completely been a hidden treasure, and this idea of opening it up to the public means the tower will get some media coverage and people will want to come and see it. It takes things out of the world of one or two dusty academics and puts it into the real world. What really matters to me about history and people encountering history is that it makes your own life fit into this scale of historical perspective. We are part of a long cycle of humanity that has come through the ages. When you stand here, you are no different to the people who stood here 500 years ago.”

For details of when you can visit Longthorpe Tower, visit www.vivacity-peterborough.com/museums-and-heritage/longthorpe-tower/