Oliver Cromwell is one of the best-known figures in British history. His face glowers from many portraits produced in his later life when he was Lord Protector, most famously the iconic ‘warts and all’ depiction by Sir Peter Lely. Because of Cromwell’s significance and notoriety, portraits were painted not only of him but also his family, including his wife Elizabeth and six surviving children. Until now though, no authenticated paintings of his parents have been identified.

To some extent this is to be expected. Cromwell’s father Robert was the second son of a wealthy family, so didn’t inherit wealth and titles, instead making his living from the rents of properties in Huntingdon; today we might describe him as a ‘buy to let’ landlord. He died in 1617, when Cromwell was at university, so did not live to see his son’s rise to prominence. He was neither wealthy enough to commission a portrait of himself, nor lived long enough to have one produced due to his son’s status.

Cromwell’s mother, Elizabeth Steward, is more surprising. She died in 1654, the year after he became Lord Protector, and had lived with her son and his family since her husband’s death. Lots of paintings have been ascribed to be her, to the point where seemingly any 1600s portrait
of an older lady with a mob cap has been identified as the Cromwell family matriarch. A pair of portraits traditionally identified as Cromwell’s parents displayed in the Cromwell Museum until 2020 were disproven a few years ago. As such, no portrait (until now) has ever been definitively identified as Elizabeth.

Last year one of the Museum’s Trustees, the historian Paul Lay, was giving a talk on Cromwell at the Chalke Valley History Festival. He was approached by one of the audience saying that he had a portrait of Cromwell’s mother in his attic. He e-mailed details and photographs to Paul, with a view to potentially lending it to the Museum for display. The owner had purchased the painting at auction in 1992, displaying it in his home in St Albans until downsizing to a smaller house a couple of years ago, since when it has been carefully stored in his loft. It’s in good condition but is undergoing a little bit of remedial conservation before coming to the Museum.

Significantly, it matches an 18th century engraving identified as Mrs Cromwell ‘From an original picture in the possession of the Earl of Sandwich at Hinchingbrooke’. A 19th century gallery label on the back of the frame likewise identifies it as having been exhibited on loan from the Earl of Sandwich, so it is clearly the same painting. This adds to its veracity, being identified as Cromwell’s mother just a century after her death (earlier than many other supposed examples) and that it was displayed as such at a house associated with the family.

The painting will be exhibited at the Cromwell Museum from the end of April. Whilst research is ongoing to pin down its authenticity, it’s possible that we may finally have found a likeness of Oliver Cromwell’s mum. 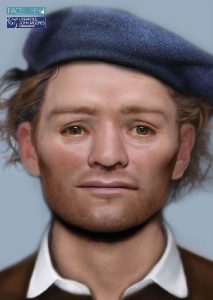 From Dunbar to Durham: An Archaeological Mystery

The Cromwell Museum is hosting a touring exhibit this summer in association with Durham University, looking at an archaeological detective story which reveals the human story behind the Civil Wars of the mid-1600s.

In November 2013, archaeologists discovered two mass graves on Durham’s UNESCO World Heritage Site at Palace Green. Following the excavations, historic and scientific analysis took place on the remains, comparing how the skeletons were laid out compared to other mass graves in Europe. Then the remains were examined by bioarchaeologists and scientists who were able to find out more about these men. It showed how old they were, where they were from, the diseases they had and the nutritional deficiencies they may have had in their lifetime.

In September 2015, the project team was able to conclude that ‘the only plausible’ explanation was that the skeletons were those of Scottish soldiers captured by Parliamentarian forces following their defeat by Oliver Cromwell at the Battle of Dunbar in September 1650, who were then taken to Durham. Here, up to 1,700 died as prisoners of war and some of their remains were found under Palace Green Library. 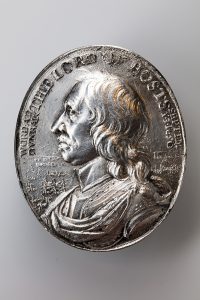 The display explores the story behind the men and what was revealed about their lives and deaths by the archaeology. It has resonance, not only in its connections to Cromwell, but that Scots prisoners were subsequently used as labourers in this area during the drainage of the Fens being conducted at this time. Objects from the Museum’s collections will also be used to bring the story of this battle to life, with Cromwell describing his victory as “one of the most signal mercies”.

The exhibition will run from Saturday 30 April until Sunday 11 September during normal museum opening hours; admission is free of charge.

FURTHER DETAILS ABOUT THIS AND A SUPPORTING PROGRAMME OF EVENTS CAN BE FOUND ON THE CROMWELL MUSEUM’S WEBSITE AT: WWW.CROMWELLMUSEUM.ORG.