[prev] …1,200 people. EMI didn’t tell us, but they came down for that, and offered us more contracts as a result. Lowestoft, Yarmouth, Skegness, Northampton – we did events all over the place, then put the winners onto TV. So, on the TV is said: ‘From S&M Entertainments’! We built up such a good relationship with EMI they invited us to their big shindig in Birmingham – loads of celebrities, free champage and caviar, and us kids all of about 19!

WHAT DID YOUR KEY COMPETITOR, STEVE ALLEN, MAKE OF ALL THIS?
By then the rivalry was growing. We had these t-shirts done with ‘S&M Funk Force’ on them, and we put a life-size cardboard cut-out in one of the t-shirts at the entrance, stuck a picture of Steve Allen’s face on it and put a speech bubble saying ‘These t-shirts are so good even I’ve got one!’ He was fuming… We were a bit cheeky – but we liked to have a bit of fun with it. There was another thing that he only recently found out about. In those days, we used to do flyposting – but I came to the conclusion that doing it at night looked very suspicious. So we’d do it in the day, and no one would take a blind bit of notice. But one day we stumbled upon a load of Steve Allen’s posters, just put up, still wet. We peeled them all off, and stuck them all over the fish market, on Boots, on Woolworths…

Later, we heard that Steve Allen got a phone call from Woolworth’s saying “Come and take your ****ing posters down!” He had no idea what the guy was talking about, and phoned around to try to get someone to get rid of the posters, but couldn’t find anyone so had to go and scrape them off himself! The best one, though, was when we were auditioning for DJs. This lad came on the decks and he was crap. We said the usual: ‘Leave us your name and if anything comes up we’ll let you know.’ And he said his name was Steve Allen. So, all of a sudden, he became good. We took him on, but instead of having him as the headliner we had him support the most rubbish acts – ‘…plus Steve Allen’.

Steve Allen’s solicitor wrote to us insisting that our DJ change his name – so we got our Steve to present his birth certificate. But the crowd would go to both lots of events anyway – his and ours. And in a way, he was the inspiration for us. He used to drive around in his BMW sports, and we thought ‘What a cool dude… What a life that must be…’’ This year, we’re actually getting together with Steve for a Bury the Hatchet event on 5 December. It’s a charity event – a sort of S&M versus Steve Allen disco. He’s very much on board with it. It will be very interesting has I haven’t spoken to Steve since back in the day. And Grant Santino is actually still performing, so we thought we’d try to get him back too! 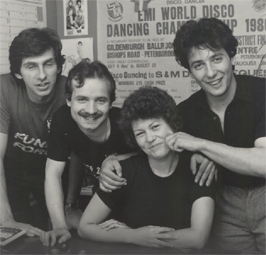 Team S&M in the early days!

HOW DID PAPA LUIGI EMERGE OUT OF THIS?
My brother-in-law was running the kebab house. He was struggling a bit and we used to help out when we could, even though I was working eight days a week at the time with S&M. And I started thinking: ‘We’re not Greek – we should turn this into an Italian eatery here’. But we knew we had to have a different angle. I wanted to introduce pizza cooked in a log oven, like we’d get when we went back to Italy. So we offered the chef from Quindici, our village in Italy, a job in England, and he jumped at the chance. Then we had to build a log oven. They were very hard to find, but we found a guy from Bedford who had built one before, and that was another big first. Just seeing the pizzas cook in that oven was amazing. They could cook in 60 seconds. Another thing was that pizzas generally were just 9” then, but we experimented with making them 12” on those huge plates. That had never been done before. And I’ll always remember the reaction those got – ‘I can’t eat that, it’s huge!’ But they did – it just captured the imagination.

WHERE DID THE IDEA FOR THE UK’S FIRST PIZZA DELIVERY SERVICE COME FROM?
We ended up being incredibly busy on Thursday, Friday, Saturday and Sunday – but why weren’t we busy Monday, Tuesday and Wednesday? Every time we did a promotion on those days – 10% off, free bottle of wine – we’d fill the place, but then when we took the promotion away, the levels would go back to normal. Then I was lying awake one night, and thought ‘You know what? If they won’t come to us we’ll go to them…’ – and that was how Dial-a-Pizza was born. That was early 1982, but there was no one in the country doing this. I didn’t even know they were doing it in the States. And we got some great publicity. The day we were going to launch, the van got stolen – from right opposite the police station. The press got involved, and the next day this guy Mark Shin found the van. He’d been unemployed, so to get more publicity I thought we’d offer him a job – and the press picked up on it again, then the TV came and did a story.

WAS IT AN IMMEDIATE SUCCESS?
It was hectic. The restaurant got busier, and Dial-a-Pizza got busy, but I learned early on that we were going to need to separate the two operations. There was an outbuilding, but it was going to cost about £30,000 to convert it. I went to the bank manager and he said: ‘You want us to out £30,000 into this? It’s a phase. It’ll pass.’ I said: ‘This will be big!’ And he just said: ‘No, no, no…’ stood up, and opened the door for me to leave. So, in the end we just had to tighten our belts and finance it out of turnover. We did that in three or four months. And it started to work like a dream – we ended up doing 200 deliveries a night. And the first ever customer, Mr Brown, who called up on that very first night is still a customer today, so we must be doing something right!

ALL OF THIS HAS CLEARLY INVOLVED PLENTY OF CREATIVE THINKING – BUT ALSO, JUST PLAIN HARD WORK. WHERE DID THAT WORK ETHIC COME FROM?
My mum and dad – especially my mum, who was the driving force – drummed into me the idea that you earned to support your family. You didn’t spend more than you could afford or buy things you didn’t need. It was old-school Italian. It wasn’t about going out and earning thousands, it was about putting food on the table. My dad came to work in the brickyards. He worked seven days a week, and when he was off on his holidays from the brickyards – and later Perkins – he worked on the land. They would not have tolerated me lying around the house doing nothing. That’s really where my work ethic came from.

But the thing is, you’re a long time working, and for me it was also important that I did something I enjoyed. My mum had always said to me: ‘Why don’t you get a proper job?’ because she never thought much of this entertainment lark. Well, the gig with Grant Santino in 1978 was so successful that we made about £1,500 profit, which was a lot of money back then, so I decided I was going to show it to her. There was a programme in those days called Take Your Pick, and they always had a load of money in this briefcase. That stuck in my mind. So I put all the money in a briefcase, just like they did on the programme, and said: ‘Look Ma!’ and opened it up. She just looked at it and said: ‘Yes, that’s today. How about tomorrow…?’

BURY THE HATCHET
Saturday, 5 December at 7pm
The Ballroom, Peterborough Town Hall
Steve Allen’s Easy Street vs Papa Luigi’s S&M Crew, 70’s 80’s revival, with all the old Djs in action once again. 40 years in the making! All proceeds will go to the Mayor’s Charity.