The latest government figures reveal that around one in four adults are obese and it is estimated that, by 2034, this will increase to one in three. 62.5% of Peterborough’s population is now overweight or obese – but help is at hand... Slimming World is dedicated to helping people lose weight, and The Moment talked to two women who literally turned their lives around through their involvement with local groups.

A slimmer who transformed her belief in herself by losing over 2 stone is using her success to shape a whole new career helping other people change their lives and achieve their weight loss dreams too.

Holly Nikel joined her local Slimming World group in Peterborough in September 2015. Since then she has dropped from 14st 1lb to 11st 12lbs – and is now is using her success to shape a whole new career helping other people change their lives and achieve their weight loss dreams too.

She says ‘I joined when my first son was five months old and I was planning how to introduce healthy solid food for him. My BMI during pregnancy meant a Gestational Diabetes test and desperate heartburn ensured sleep was disrupted ahead of birth. Like many people I was uncomfortable with my weight, but hadn’t accepted that vulnerability fully before then. Pregnancy and having a baby was a trigger to look after myself too, but was amazed to find out my nutritional needs as a breastfeeding mum :meant other slimming organisations would have turned me away. I lost my first stone in 13 weeks and my second in another 17 weeks.’

Now she has trained as a Consultant for Slimming World, the UK’s largest group-based weight loss organisation, at their national training academy in Derbyshire, and members at the City Centre group on Churchgate roundabout welcomed Holly as their new Consultant over Easter 2019. ‘When I first joined Slimming World as a member, I never dreamed that I would end up helping other people to lose weight but it’s a privilege for me to be able to pass on the experience, insight and understanding that helped me.’ 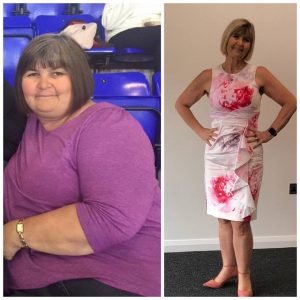 Sammie before and after…

Another local woman who has turned from slimmer to group leader is 52-year-old Sammie Todd, who turned to a healthy lifestyle following her battle with cancer. She joined her local Slimming World group in Bretton and within a year dropped from a size 24 to a size 10 with a jaw-dropping loss of 7st 9.5lbs. After seeing the difference that it has made to both her and her family’s lives, she also wants to help others do the same.

‘I was overweight all of my adult life and it really made me miss out on activities with my children and grandchildren. It wasn’t until I had cancer and I was going through to my life-saving operation that I realised I really needed to make a change to my life. I’ll never forget that my eldest grandchild said: “Please never leave me Nan” and I made a promise to him that I wouldn’t. So, true to my word, I made some lifestyle changes and to this day, I’ve been doing things that I never did before thanks to Slimming World.”

Since losing her weight, Sammie has a new-found energy to do things in life, including enjoying a daily 3km walk, joining her kids on rollercoasters and even cooking all of her family meals from fresh. Sammie also made it to the final 10 throughout the UK and Ireland, in Slimming World’s national competition, Woman of The Year, last October.

Holly’s Slimming World group will be held at African Caribbean Forum, Millennium Building, car park off Dickens Street, Peterborough, PE1 5GD every Monday at 5.30pm and 7.30pm. For more information or to join Holly’s group call her on 07944 906 969 or email

Sammie‘s new Slimming World group will be held on Mondays at 9.30am at St Andrew’s United Reformed Church in Netherton. For more details, call Sammie on 07494872585 or email