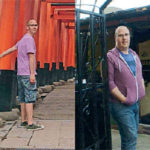 Julian Stewart joined Slimming World in 2016 and lost 6st 8lbs in 1 year 9 months. Even more impressively, he’s kept the weight off. Now the 40-year-old, who dropped to 11st 7lb, has been named the group’s Diamond Member of the Year. The title is awarded to the group’s most inspirational member who has lost weight and maintained their new shape. Julian had compelling reasons to join Slimming World.

“My balance was compromised following a stroke in 2013 and my weight was an extra strain on my mobility. My independence was very important to me and I surrendered my driving licence because of the long recovery period in care and supported living. I knew I couldn’t do an intense fitness regime within my new normal, but I was back to day-to-day life and wanted to lose weight. Slimming World seemed a possible solution.”

Julian dropped from a 40in waist to a 32in or 30in waist. He says: “I had struggled with my weight all my life. When I joined Slimming World I found it was completely different to a tedious, punishing diet, because it was just so simple, and the results started coming on the first weigh-in. I felt positive and committed to a 12 week countdown the evening I joined. What I like most is you can still have hearty, flavoursome food, but now I cook those favourite meals in a healthy way. With Slimming World the support that I needed was also there right from day one.”

Julian follows Slimming World’s Food Optimising eating plan, which encourages slimmers to fill up on satisfying foods like fruit and veg, pasta, rice, potatoes, lean meat and fish so they lose weight without going hungry. Since reaching his target weight Julian has continued attending Slimming World groups and believes without their unwavering support he would have regained weight as he had after previous slimming journeys. “I was never struck by the idea of the group experience. But in the end that was where I was really getting something for my weekly fee and spending that time there each week reaffirmed my commitment to my weight loss.”

Holly, who runs the Millennium Centre group which Julian attends, says: “At Slimming World we believe that losing weight and maintaining it for the long term is the most under-recognised achievement in weight management – I’m so proud of Julian and the inspirational way in which he’s done this.”

• To find out more about the Peterborough City Centre Slimming World group, held at Millennium Centre every Monday at 5.30pm and 7.30pm, simply pop along, call Holly on 07944 906969, email or visit www.slimmingworld.co.uk