Chevrolet has been making great inroads into the European marketplace lately with what is now a very comprehensive series of models. And while the marque remains essentially American at heart – think Chevy and the song American Pie and muscular V8 engines can’t help but spring immediately to mind – there’s a lot more to what the brand offers in the UK. The current range runs from the small city car Spark right the way through to the fire-breathing Camaro, taking in mid-sized family cars and SUVs en route. There’s even the innovative Volt, the electric car that was named 2012’s Car of the Year. 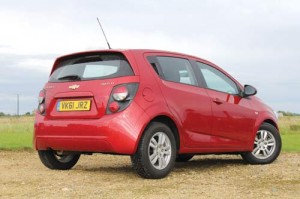 If you thought Chevrolet was still building rebadged Daewoos, think again. The new Aveo reinforces this point. Introduced as a 2012 model, it replaced the rather frumpy and nondescript first generation model based on the Daewoo Kalos. The golden bowtie- adorned current version you can now buy from dealerships has little in common with its lacklustre predecessor; it is a far more charismatic and purposeful machine with exterior looks that wouldn’t disgrace something far sportier. With a thrusting, shark-like nose and slanted quad-headlamps, the Aveo exudes hot hatch without even trying. Among the small family cars out there – a segment where there’s very fierce competition – the Aveo is visually one of the better-looking and more stylish entries. It brings a high level of distinctiveness to its small canvas, with a purposeful persona that belies its diminutive dimensions. 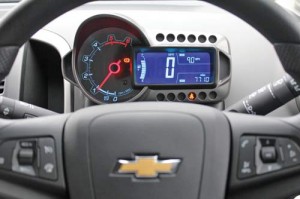 That theme continues inside, with a cabin design that goes beyond the usual approach of just whacking a few vital analogue dials in front of the driver and then fitting in the controls and switches around them. The silver(ish) plastic dash behind the audio operation-equipped steering wheel – the same as in the much-more expensive Camaro, don’t ya know? – has been given the appearance of drilled alloy, with many of the warning indicators contained within the individual ‘holes’. Granted, the alloy effect doesn’t quite work, as you’d probably expect in a mass-produced family car at this price level, but it shows a level of imagination that many of the Aveo’s rivals don’t possess. 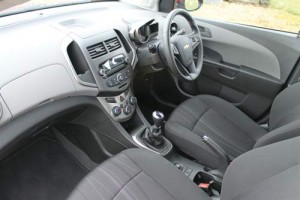 being of the conventional needle-and-dial type. Speed and fuel readouts, as well as vital bits of driver information, are all ice-blue digital; easy to read and very accurate. For a car of its size, the Aveo has quite a lot of space inside, albeit the prominent centre console, packed with audio and heating controls, does make the driver’s side a little snug. It envelops you like a cockpit, and while some may appreciate this, others may bemoan the slightly- hemmed in feeling. This is especially true if you’re on the tall side. There’s generous room for the front passenger though and an adequate amount for those in the rear. While there’s provision for three in the back, we can’t see the gooseberry
in the middle being that comfortable though. It’s best to think of the Aveo as a four-seater for everything other than emergencies. Or if you’ve got three small triplets. Who get on well with each other.

Rear cargo space is plentiful enough for a car of this class, with a low loading lip and the boot area free from any significant intrusions. If you need to pack even more in, then the load bay cover/rear parcel shelf is easily removable, while the rear seats can be folded almost flat or split so that either one or two thirds can be doubled over to get bulkier items in without comprising passenger accommodation too much.