Robert Loomes is the only watchmaker in England to have made his own, limited-edition chronograph. THE MOMENT caught up with the master craftsman to talk family legacies, finding his niche, and making things from scratch.

So, you’re following in your family’s footsteps? 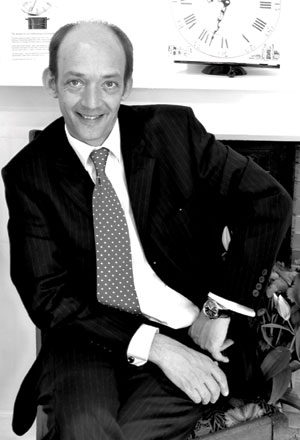 Yes. My father started the business around 1966. Originally, he was a genealogist, but he decided to pack it in and move out to the middle of nowhere on the Yorkshire Dales. My mother didn’t know what to do, so they bought this big old tumbledown building and she opened an antiques shop.
Pretty soon after that, he got interested in antique clocks – buying them and doing some research. He’d then sell them, having discovered all the history about the maker. After a couple of years, they narrowed the business down to just buying and selling clocks.

When did you get involved?

As a teenager, I wanted nothing to do with it. I obstinately chose art subjects for my A levels and went to university to study English. I spent a year there and thought that it wasn’t for me. I went to see my Dad. The first thing he asked was if my girlfriend was pregnant. I said no. Then he said, that’s fine you can start here tomorrow. If you don’t like it you can always do something else. At that point it was meant to be a stopgap until I decided what I wanted to do with my life. Then about five years later her reminded me of that fact, but I thought to myself, I’m here now, aren’t I? To be honest, I really found the work interesting and knew that I could see myself doing it for the rest of my life.

How did you evolve the business from dealing in antique clocks to making your own watches?

That was the business I went into – my father was very much an antiques dealer and a writer. He’s written about 20 odd textbooks on and off over the years. I got into it – and we had three or four different clockmakers who were all self-employed who did work for us. And I became more and more fascinated with that. I ended up working two days a week for a clockmaker and four days a week for my father, with no holiday at all for about three years. I then broke off on my own – the guy who was teaching me retired and he very generously sold me the contents of his workshop for a small amount. It was only then, when I started working on my own, that I actually bothered to sit down and finish my qualifications.

How long ago was that?

I’ve been in Stamford for nearly 20 years now. As time went by I got more and more into doing expensive/luxury watch repairs. The more I was doing, the more I started to think that I could make something like this. It’s not that difficult. So, around five years ago, I made a watch for myself. I didn’t have any money for fripperies, so I was walking around with a watch that only had a pair of hands on a blank white dial. And everyone noticed it. They said ‘What’s that? What are you wearing?’ Once they learned that I made it myself, they asked me if I could make them one. The idea grew from that.

When did you start seriously making your own watches?

At the end of 2008, we sat down and decided that it would be far cheaper and realistic to make batches of watches rather than churn them out one at a time. So, by the end of last year, we had our first set of mechanical watches made. They sold out in ten weeks. I was absolutely bowled over. We’ve just nearly sold out a second batch of 100.

Tell us about the new watch.

Our latest piece is a chronograph, which is both a normal watch and a stopwatch. It’s a much more challenging thing from a watchmaker’s point of view. The chronograph is much more complicated. It has twice the number of parts crammed into the same sized thing on your wrist. It was a real treat and a thorough pleasure for us to create. We’re just starting to make our first batch now.

We designed the aesthetic too. We spent a lot of time on the dial because people are very particular about what they look at when they are buying a watch. We spoke to a lot of customers – and the result is partly our design, but a lot of the feedback from our clients went into it too. We asked them what they liked the look of. What attracted them to the watch that they were wearing. In the end, we’ve come up with a slightly vintage looking plain dial with Roman numerals.

So, they’re completely made in the UK?

The watches are all made in our workshop, which is just downstairs from our actual shop in Stamford. We make some of the parts ourselves, but we outsourced some or used parts that were already in existence. You can make a watch from scratch, but then the whole endeavour becomes unfeasibly expensive. There are some people who do it, but they cost around £40k per piece. So, you’ve really got to know in advance that you’ve got a customer with deep pockets!

Do you only make men’s watches?

At the moment, yes. We’re always getting pushed hard by our customers to come up with a ladies’ watch, and I’m sure we will at some point in the very near future.

How long does it take to make one?
About ten hours per watch spread over 21 days.

Fun fact: The watch beats 21,600 times an hour, which is about as fast as the human hand/brain can function.