The high street is currently big news and current crises of confidence have shifted attention onto the smaller players on our city streets. For those of us who have been trading on the high street for some time, it's become abundantly clear that something has to be done...

Upward only rent reviews, greedy landlords, sky high parking charges and ridiculous business rates along with an internet revolution and a deep recession have combined to create one of the most challenging times for retail.

Sir Terry Leahy the ex-boss of Tesco recently said that the closure of small shops on the high street was “progress”. We beg to differ. We fail to see how the homogenisation of our high street with big brands creating a clone culture is considered aspirational. Supporters of the big box approach to retail epouse choice, value and convenience when what they’re really talking about is maximisation of profit.

Our high street isn’t simply a place to shop. It is the heartbeat of our local community. Each small shop that closes means less money circulating in our local economy, less real choice, fewer routes to market for smaller producers, less control over the food we eat and a decline in the places where we live and work.

Independent retailers make up the lifeblood and the DNA of our cities and towns but we’re usually woefully under represented at all levels when it comes to making choices about our local environment.

With this in mind a group of likeminded Local Independent Retailers have come together in Peterborough to create a local charter for our city. A diverse mix of retailers including hairdressers, coffee shops, florists, boutiques, niche food retailers, footwear, accessories, cosmetics & opticians to name just a few trades.

Through a series of meetings, together we have created a three phase plan:

Phase One is to raise awareness of the issues on the high street and what we are doing to combat them. We have several projects underway with this aim.

Phase Two is to create an Indie map of the city centre to promote our mix of independent retailers, the coffee shops that serve great coffee (and pay taxes) the local butchers that sell safe and traceable products and don’t allow horsemeat into the supply chain, the local boutiques that have something different, so that we don’t all look the same and the niche food retailers that have us thinking about what we’re actually eating.

The Third Phase relates to the city itself and the changes that we believe will help the city to grow, this includes attracting visitors into the city and giving them enough things to do to ensure that they spend a reasonable time here.

Created in February 2013 as a response to the gloom in the media and the general malaise of the economy Local Indie Retailers aim to promote the positive aspects of Indie retailers in the city and to create a vision for our future trading here.

In 2012 there were more than 4 million businesses across the UK operating across 700 towns.

It only takes 10% of spending to go to local independent businesses to make an impact in your area !

Local indie retailers are in the process of launching a local website where you can hear our stories, meanwhile you can follow them us on our facebook page, or on twitter using the hashtag #localindieretailer 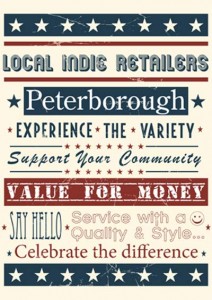