January 2020 sees the return of the Katharine of Aragon Festival, presented by Peterborough Cathedral in association with Vivacity – and this year, they have a very special guest: Queen Katharine herself! Played by historian and curator of Tutbury Castle, Lesley Smith, in full authentic costume and full character, it is a first not only for Peterborough, but for anywhere... Moment editor Toby Venables talked to her about stepping – literally – into Katharine’s shoes.

You perform various women from history, including Elizabeth I, Anne Boleyn and Boudicca, but this is the first time you have played Katharine of Aragon. How did it come about?
Last year I appeared as Mary Queen of Scots at Peterborough Cathedral, and I’m happy to say it was quite successful, and as a result of that they asked me if I would be Katharine of Aragon. I play twelve different women and I knew doing another one would be really difficult, but it was a great honour to be asked. And, actually, it wasn’t too big a leap because I already play Anne Boleyn, and if you know about Anne you know quite a bit about Katharine. But her tale is so dark… It was something I kind of knew I’d end up playing one day, but I probably needed to build up to it…

Is she a darker, more serious character than most you play?
She is very serious. But although I play Nell Gwynn, I also play a very dark Anne Boleyn – in the last 45 minutes of her life in the Tower – and Boudicca is so bad I’ve had three people faint! The thing with Katharine, though is that it is a very ‘now’ story in some ways – the way that the law has changed in relation to coercion in marriage, and the way we view gender, which has changed hugely in my lifetime. She is also an anointed queen. Very important, that anointing bit… And she is someone who came from warring parents. Her mother and father, Isabella and Ferdinand, had a title given to them by the Pope which was ‘Catholic Kings’. So, her mother was given a male title because of her warrior attitude. Katharine came from this, but also came from madness, which you find in her family background. Katharine’s older sister, Joanna, was married to Phillip the Fair, who died when she was pregnant, and she proceeded to carry him around Spain in a box with her entourage. She would occasionally get him out and kiss him, and slept alongside the box as he was deteriorating in the Spanish heat. So that was Katharine’s sister!

So, Katharine comes to England at the age of 15, very sweet, very lovely, not speaking any English but fluent in French and Latin, to marry Henry’s older brother Arthur. Then, five months into the marriage Arthur dies, and she is deserted for six years. At one point, she was not getting enough food. Imagine how distressing it was for this young girl! But along comes this golden boy, Henry – who would become Henry VIII. And I believe they were in love. He certainly wrote her some beautiful poetry. For a time they enjoyed a sweet life together, but then came the terrible business of one dead child after another, and Henry’s eyes turned to other women. One of his mistresses was Elizabeth Blount, who bore FitzRoy, and Henry acknowledged that the boy was his – and at one point was about to legitimise him, which must have been a heart-chilling moment for Katharine. But there is evidence that Katharine was through her menopause by the age of 38. In the end, when she is rejected utterly, that really is a tragedy. Katharine was given a beautiful christening gown from Spain to use for the heir to the English throne – a fantastically valuable garment decorated with pearls. And when Anne Boleyn was pregnant, she demanded it. That’s vicious! But Katharine refused, and refused, and refused. So I will have a Tudor christening gown with me, and during my presentation I’ll be speaking to the gown – to the ghosts of the dead children, the heir who should have been.

What really interests me about Katharine, though, is that she saw Henry was breaking from Rome, excommunicated – which means being given over, body and soul, to the devil, forever – and the people being unable to receive what she would view as the comfort of the blessed sacrament in its proper form, and yet she doesn’t say to herself: ‘I’m going to go ahead with this divorce because otherwise the sin would be so heavy upon my soul…’ Because, by giving herself up as a sacrifice, by allowing the divorce, her child becomes a bastard. So, I have to play this woman who is desperate to keep her dignity, believing that in time, in spite of this catastrophic divorce from Europe and the Catholic church, her daughter would eventually inherit the throne and bring England back to Rome.

As a historian you’re bound by facts, but when playing the character do you find you have to make decisions to fill the gaps in our knowledge?
You do have to make decisions. I often say that the collective noun for historians is an ‘argument’. But I do have to take a particular road. One of the things I need to be careful about is that I’m not overly sympathetic to a character because I know the end of the story. So I’m going to give her warts and all. At the end I say to the audience that this is a view. The facts are real, but interpretation of them is another matter – and if you listen to me being Anne Boleyn, you’ll feel differently about it! 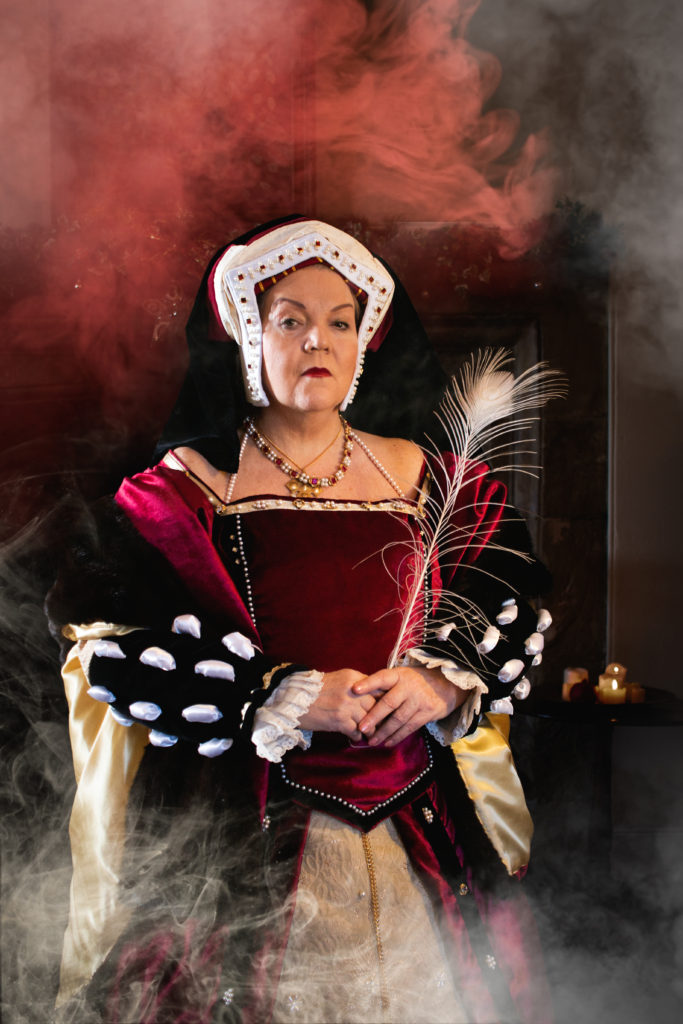 Tell me a bit about the clothing you’re having made for this…
The costume is costing thousands. I have a really excellent group of costumiers who have worked with me over the years, and I do spend a lot of time getting the costumes right. There’s a specialist in silk work, a specialist beader, a wigmaker, a shoemaker. There’s even a bloke who does welding! I work on the basis that if the costume is sensational, it will carry people. Also, I don’t want people to go ‘Oh! That sleeve’s wrong for the period!’ Everything is right, right down to the underwear. The shoes are hand-made. Even the pieces of jewellery that I’ll be wearing are replicas from paintings. For the headdress I have commissioned probably the top headdress maker in Europe. She goes to graves and does rubbings, looks through official documents and paintings, and she’s made this gable hood for me – and if you want to know what that looks like, picture the Queen of Hearts! The main costume is taken from a painting which only shows the waist up, so we’re mixing that with the lower part of another painting, and it is an extraordinary colour – a deep mauve-pink. The colours of Spain are black, red and gold, but you have to be careful with red, because if it’s too red, she’s a scarlet woman. But every detail is authentic, even down to my nails. I have to remember to keep my nails short and uncoloured, because she doesn’t want to look like she couldn’t afford scissors.

How long will it take to put on when it’s finished?
When I first got into Elizabeth’s dress 20 years ago it took two people two hours. Now, one person can do it in 40 minutes, so we’ve got into the swing of it, and this is not going to be more complicated than Elizabeth. I think it will probably take about 35 minutes. But when you’re in it, you’ve had it! You can’t have a drink, can’t go to the loo… They had arrangements in those days, but I’ve no intention of having a pot held for me! I’ve also got to learn to walk in it, because it will be slightly different from all my other costumes. I’m not quite sure yet what the weight is going to be; my Elizabeth costume is 4 stone 3 pounds (26.7 kg) and I’m expecting this one to be way over 2 stone (12.7 kg).

What is that moment going to be like when you first step out as Queen Katharine?
It’s quite a responsibility. You’re in God’s house, and the Spanish – who are involved with the funding of the Festival – still take very seriously the treatment of their daughter. And I will be coming not from the Cathedral entrance, but from where her tomb is. Then, before I go on, I always pray for the person I’m going to be. That might sound a bit strange, whether you’re religious or not, but I always say to them: ‘Let me be fit for you…’ That focuses the mind, because you’re suddenly reminded they were real people, with real lives. Put salt or honey on your tongue and it’s no different for you or I than it is for them.

The 2020 Katharine of Aragon Festival

Peterborough turns the clock back to Tudor times with an action-packed festival commemorating the day when Katharine of Aragon was buried at Peterborough Abbey (now the Cathedral) on 29 January 1536. 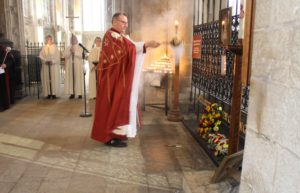 The Festival programme features the first ever performance of a new Katharine of Aragon monologue by Lesley Smith, Curator of Tutbury Castle, who will wear an authentic costume commissioned especially for the occasion. There will also be a talk about Katharine’s daughter Princess Mary and her upbringing by Melita Thomas, the co-founder and editor of the Tudor Times website. Spanish artists will present A Homage to Katharine of Aragon from Spain, with music, drama and dance performances (supported by the Spanish Embassy).

There are numerous activities for families too: At Home with the Tudors living history days at Peterborough Museum and tours led by ‘Old Scarlett the Tudor gravedigger’, at the Cathedral. In addition, there will be a Family Audience with Queen Katharine in the Cathedral Visitor Centre, at which Lesley Smith will meet children and their families in costume and character as Katharine of Aragon. 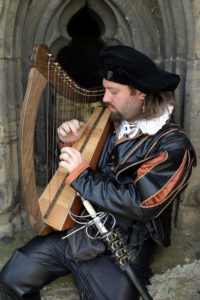 The Festival begins with a Service of Commemoration which anyone can attend, when wreaths will be laid on Katharine’s tomb. Before that, schoolchildren, many of them in Tudor costume, accompanied by civic dignitaries and period musician Gareth Williams, will proceed across Cathedral Square from St John’s Church to attend the service at the Cathedral.

Full information about the programme, with details of how to book tickets, are on the Cathedral website here www.peterborough-cathedral.org.uk/katharine.aspx or call 01733 355315 (for Museum tickets call 01733 864663).

A special accommodation deal is available for Festival goers at Park Inn Peterborough and details are available via the Cathedral website.

Full details of the programme are attached, or visit www.peterborough-cathedral.org.uk