The use of English in Northampton I can now denounce; The people of that town certainly mispronounce The name of the river so wise and serene; They call it Nen but it’s properly the Neen...

David: Here we are again Toby, there’s still so much to discuss about Peterborough. Things seem to change all the time. However, there are a few constants in our landscape – the Cathedral, Guildhall, Thorpe Hall, even the Lido – hopefully they’re not likely to change.
Toby: I actually think you’ve missed one of the most important features. Here’s a bit of a riddle – what’s old and slow and wanders through the centre of Peterborough without making a noise? No, not me! Answer: the river Nene. 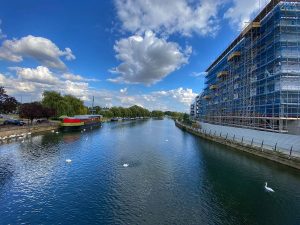 David: Very good, Toby, I bet you don’t know how the Nene got its name.
Toby: Go on, tell me.
David: Well, it’s possible that the word Nene comes from ancient words for snow, rain or washing, but that’s pure speculation. As with many of these things, nobody really knows. What is certain is that the Nene is the tenth longest river in the country. From its source at Arbury Hill in Northamptonshire to its mouth at Sutton Bridge in The Wash.
Toby: If I remember correctly, it’s one of four rivers that flow into The Wash – the Witham, Welland, Nene and Ouse.
David: The Nene is about 100 miles long and flows through Northampton, Wellingborough, Thrapston, Oundle, Peterborough and Wisbech, and is navigable for 88 miles, from Northampton to The Wash. Alongside there’s a long-distance footpath, the Nene Way, which runs for 110 miles and goes through wonderful little places like Earls Barton, Wadenhoe, Warmington, Fotheringhay, Elton and Wansford. Well worth walking all or part of it.
Toby: Of course, Peterborough makes very good use of the river, not in the centre but at Ferry Meadows.
David: Yes, Ferry Meadows and Nene Park have been a real success. Just think how many people have visited from both near and far. Peterborough Development Corporation was certainly inspired when they decided to build a country park. And let’s not forget that there are various country parks between Peterborough and Northampton that utilise the river and the countryside close by. Anyway, what can you tell me about the river Nene in Peterborough?
Toby: The Nene was tidal to Peterborough until the construction of a tidal lock and sluice at the Dog in a Doublet in 1937. My father was a reporter for the Peterborough Standard at the time and I recall him telling me all about the fertiliser, grain and timber boats that used to come as far as Peterborough, to Whitworth’s Mill or to the timber yards on the south side of the river. 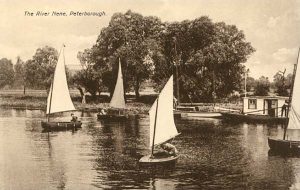 David: There’s a hint about Peterborough’s trading past when you look at The Customs House which stands beside the river bridge in the centre of Peterborough. It’s an 18th century building which may have originated as a granary, later functioning as a bonded warehouse. Goods liable for customs duties would have been kept there until tax was paid. Apparently, Napoleonic prisoners of war disembarked there en route to the prison camp at Norman Cross. It’s the only building left in Peterborough that shows that the city was once an inland port.
Toby: There’s one of our blue plaques on the building – as well as one on the town bridge which was opened in 1943, replacing an iron bridge which was built in 1872, which itself replaced a timber bridge originally erected in 1307.
David: Of course it’s now more important than ever that we look after our river. We now have a new population who live close to the river, those people who live in the flats at Fletton Quays on the south side of the Embankment. It’s in their interest that the riverside is an attractive place to walk or, dare I say, promenade in the evening.
Toby: And then we have what is due to happen on the north side of the Embankment. There are plans to redevelop and improve the Embankment. The recent consultation offered options, one of which included a new football stadium. However, that may well be the topic for another of our conversations! Safe to say that there’s a long way to go on that one.
David: And whatever happens we must safeguard the views of the Cathedral. Whoever develops the Embankment has to consider vistas of the Cathedral, so that may make some of the options non-starters. In fact, the river is such an important feature in our cityscape that the Civic Society is undertaking a project to collect as many photographs of the river as possible.
Toby: That’s right – anyone who has photographs of the river please have a look on the Civic Society’s website and send us some.
David: Thanks for that – I’m sure that readers of The Moment magazine can come up with interesting photographs of the river itself, or associated features – bridges, plants, wildlife and so on.
Toby: Well David, I’ll leave you with this poem about the river Nene. A few years ago, a man called John Webb from Kent wrote to The Guardian’s Notes & Queries column asking, ‘Where does the river Nene pronounced “Neen” (Wisbech) become the river Nene pronounced “Nen” (Northampton)?
David: And what was the answer?
Toby: Apparently the pronunciation changes from ‘Nen’ to ‘Neen’ at Islip, just outside Thrapston. Anyway, as a result I felt duty-bound to stick up for the ‘Neen’ pronunciation, so wrote this poem:

The use of English in
Northampton I can now denounce;
The people of that town
certainly mispronounce
The name of the river so
wise and serene;
They call it Nen but it’s
properly the Neen.

The legitimacy of our
argument just can’t be denied;
It’s quite clear to me that
we’ve got right on our side;
The way Nene is spelled is
not hard to see
But just look at it written: N-E-N-E.

I’ll prove my point so obviously
With a cursory look at the dictionary.
Those good Northampton people
might try to ignore us
So I’ll tell them to consult any
decent thesaurus.

I mean … who ever heard of
tranquillity seren,
A gas called phosgen,
A theatrical scen?

And how many people,
Usually men,
Would use naughty words
Most of which are obscen?

So I cock a snook at our
Northamptonian friends.
Given time their inaccurate
ways they might mend.
But if they persist in calling
our river the Nen
They’ll continue to be wrong
agen and agen.