Miranda is a direct descendant of William Cecil. Her grandfather, the sixth marquess, set up the Burghley House Preservation Trust that her mother, Lady Victoria, was the first director of until 2007. Together with her husband, Orlando, and four young children, she lives at Burghley House, something this very elegant and erudite member of the Cecil family considers both a privilege and a passion

“It was a pretty radical thing to do in those days, to set up the sort of trust that exists now,” she says of her grandfather. “But he wanted a member of the family to live in the house as director. So that’s the set-up we have; a mechanism where there is a body of trustees who take the big decisions and oversee the budget, and I work for them as part of the trust.” 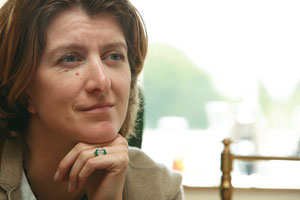 But, being family, the role of director is much more than just a job. “Part of my responsibility is to live here, which is a great honour. I grew up here, from the age of 12, so all through my conscious childhood, Burghley was home. That had an enormous effect on me and my brother. I remember my grandparents sitting right there, endlessly doing puzzles,” she gestures, across the expansive drawing room in which the interview with The Moment is taking place. “It’s them, as well as my grandfather’s hopes for Burghley, that I carry in my head every day when I’m working. It’s not a job you just leave, at the end of the day. It’s 24/7, all through the year. And you try and do the right thing.”

Seeing her own four children – ranging in ages from two to 11 – growing up here is also something quite special. “When you’ve got a family, you’re so aware of quality of life. This is amazing for them. When people come here, they know they’re coming to a house that is lived in, or some of them do. That’s part of its magic, you get that atmosphere of a family place. People see the plastic toys lying around in the courtyard or footballs by the front door. Only the other day, Lila was playing in the courtyard and two well-meaning old ladies came up to say they were terribly concerned because there was no-one with her. I had to explain that this was her home and she lived here.”

One of the things she feels is vital for Burghley is its long and happy connection with Stamford. “We are in Stamford; there’s no barrier to walking in the park. It’s my hope that this continues. I think you alter the atmosphere of a house, and if we put up ticket barriers at the gates, it would change everything.” Miranda herself is very connected with the community, from being patron of charities and involved with regional bodies to having the children at the local school and the family using the town’s swimming pool. “I get asked to do a lot of things locally, and if I can do it, I will do it. It’s important that somebody from Burghley is representative there.”

She does sometimes worry though that people’s perception of Burghley is “…of Downton Abbey, of people meandering about with parasols.” That’s, of course, not the case; Burghley as a visitor attraction and a working estate does and has to move with the times. But neither does she want to smash that illusion. “I think it’s rather lovely, I still like to imagine that happening here. If we didn’t love that atmosphere of a country house, we wouldn’t be here. It’s a bit like going to the cinema for the afternoon, there’s that escapism. But we do keep up with the times, we do have technology here and make a big thing about the education programme at Burghley. It’s not just about stepping back in time.”

Although increasing visitor numbers – and therefore the money that can be put back into the house and grounds – is important, the image of Burghley is foremost in Miranda’s mind, as demonstrated by the sort of events held in the park. “We’re very conscious of what we want to project here, we don’t just do anything. Small and selective is what we want to be, with everything we do, rather than mass market.” The Bjorn Again ABBA tribute concert is, perhaps, the most mainstream event that Burghley stages. “But everyone loves ABBA,” Miranda confides. “It’s absolutely my era. And we were really pleased with that event. It felt like the Battle Proms really, everybody brought picnics, there was a massive mix of ages. It was brilliant.”

Miranda would like to develop the Christmas season though. “We have the Christmas craft fair, that’s been going for a while, we have the food market as well. But I’d like to do more,” she says of the place she describes as “magical” during winter, especially when there’s snow on the ground. An ice rink is being mooted as a possibility, so watch this space.

And expect to see more of Burghley on the big and small screens too. “TV and film are important parts of what we do, very significant. Pride and Prejudice was amazing for Burghley.” Sadly, Miranda wasn’t at the house when filming took place, so missed out on getting to meet Keira Knightley and Dame Judi Dench (who became a real favourite and forged friendships with some of the staff). Television is just as major as big budget cinema though, “because you get an instant response. We’ve had a lot of TV lately.” Especially fascinating was Climbing Great Buildings, despite the collective gasp that must have gone out when a crew turned up asking to scramble all over the historic building with climbing gear. “Well, if it was good enough for St Paul’s Cathedral, then it’s good enough for us,” jokes Miranda.

Before The Moment departs, Miranda touches on how crucial she feels it is that the house is not a museum, but a historical collection as a whole, formed of items that the owners have collected over the years. “That is the value of this house, it’s a record of taste. It’s the sort of thing that sends a chill down your spine, knowing that the ninth Earl went to Naples, chose a picture, and you can see where he hung it. It’s endlessly fascinating.” And she shares one of her favourite works, a Bassano depiction of The Adoration of the Magi. It’s a large, beautiful, vibrant painting that she remembers from her childhood in the house, but one of the main reasons she likes it so much is because of the story behind its acquisition by the ninth Earl. “It had to be hurriedly taken out of Venice by night on a gondola. I’m sure it was all properly paid for, of course, but just to be on the safe side…”

For further details and a full list of events throughout the year,
see: www.burghley.co.uk

This website also has a searchable database of some of the art to be seen at the house, with more items being added all the time
The house and gardens are open from March to October, while the park is open all year round