The new Treasures exhibition at Peterborough Museum brings together 16 internationally significant artifacts which all have a direct connection to the city and surrounding area – and which have never been displayed together before. Here, Vivacity’s Interpretation & Documentation Officer Julia Habeshaw gives us some personal insights into the exhibition and its amazing artifacts.

‘I feel very privileged having spent time finding out about these objects,’ says Julia Habeshaw. ‘The more time I’ve spent researching these objects, the more I’ve found something really special about each one that puts me in awe of them.’

Although 16 objects is not many for a show, what is gathered together here is incredibly important – not just nationally but internationally. And each of them has its place right at the heart of the history of Peterborough. ‘These objects haven’t ever been shown in Peterborough, let alone all together in one room. The Barnack Burial and Water Newton Silver were so important they went straight to the British Museum and have never been shown in the place they are from, so for this exhibition they’re coming home.’

All of this has been triggered by the 900th anniversary of the Cathedral (or rather its current building) and is part of Peterborough Celebrates. But, of course, it is celebrating a history and heritage that goes much further back. ‘The Cathedral we see today dates back to the 12th century, but the Abbey as an institution dates from several centuries before that, and the Water Newton Silver is evidence of an even earlier church – perhaps the first Christian church in Britain.’

The Barnack Burial takes us further back still, to around 4,000 years ago, long before Christianity. Julia believes this has an important message for our own times. ‘It tells us that this place was always significant, but what the Barnack Burial also tells us is about migration, because the Beaker People came from continental Europe. People have always traveled throughout history – it’s not a new phenomenon. We were never one group of people who grew up in one place.’ 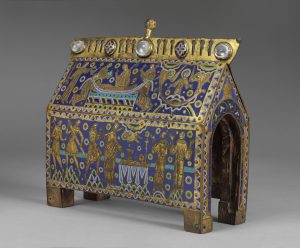 ‘The Becket Casket, on loan from the V&A, is the biggest, most ornate and earliest example of this type of relic casket. They were generally made in Limoges in France, using Limoges enamel. The earliest owner after the Reformation lived in St Neots, so we can make an assumption it is related to Peterborough Abbey, and was probably commissioned by Abbot Benedict who had been at Canterbury and witnessed the murder of Thomas Becket. He brought some of Becket’s relics with him to Peterborough, and it’s probable that this casket was commissioned for them. People believed that relics – usually bones of saints – had powers, including the power to heal, and in return for access would give money to the church. And Peterborough Abbey had the most famous and popular medieval saint’s relics, so probably did rather well out of them!’ 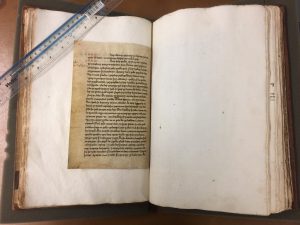 ‘The Peterborough Chronicle, although in some ways the plainest object, is hugely significant. This is one of the surviving versions of the Anglo-Saxon Chronicle, a record of events kept by monks since Alfred the Great. There were several maintained in various abbeys but the Peterborough Chronicle is special – it’s the one that goes on for the longest. The rest stop around the time of the Norman Conquest, but the Peterborough monks just keep going. They have quite a personal perspective and occasionally talk about their own political views – and because it’s not a court document they’re not just about bigging up the king. They’re also writing in the native tongue – English – so it’s very important for those studying Old and Middle English. It’s also the place that the word “she” appears in written English for the first time.’ 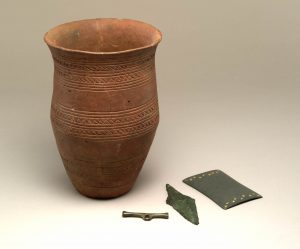 ‘The Barnack Burial is the oldest group of exhibits, and again is special. The wrist guard is made from a green stone that comes from a place in Cumbria that is incredibly hard to get to. In fact, it’s so hard to obtain that those who study prehistory believe this artifact must be a magical object. Most wrist guards of the type found in this country have 4-6 golden studs, but the Peterborough example has 18. So, our Barnack man was definitely a bling man!’

The Peterborough Psalter and Bestiary

‘The Bestiary is fascinating because of its beautiful illustrations of animals – some of which exist, and some of which don’t! If you’re of the Harry Potter generation you’ll see in the Bestiary’s fantastic names and mythical beasts exactly where J K Rowling got a lot of her inspiration…’ 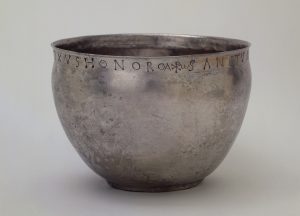 ‘The Water Newton Silver isn’t just an early example of church plate – it’s the earliest Christian silver known in the whole of the Roman Empire. That means that Durobrivae – the Roman settlement that pre-dated Peterborough – was an extremely significant town. These things not only make our history really fascinating, they give Peterborough gravitas.’ 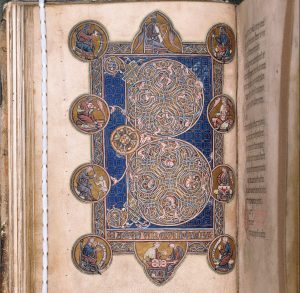 ‘This book of psalms is known to have been owned by Robert de Lindesey, Abbot of Peterborough, and so can be accurately dated to about 1220. The main unknown artist was commissioned by Peterborough Abbey and painted the three full-page images, the decorated letters and the large initials in gold and rich colours.

‘Skilled assistants would have executed the remaining ornamental initials. With its spectacular gold leaf, it’s an outstanding example of English illumination of the early 13th century.’

The Black Book of Peterborough (and Magna Carta) 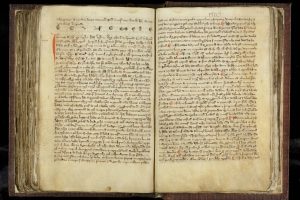 ‘We have a copy of Magna Carta which is bound into the Black Book of Peterborough. There was probably a discarded draft at the Abbey, from which the version in the Black Book has been copied – so although this actual document dates from after Magna Carta, what it gives us is a glimpse of the earlier history of Magna Carta. It’s the first time on paper that you have a questioning of the king’s power. It’s not really about the common man when first written, but about the relationship between the barons and the king, but it becomes hugely important in later debates about civil liberties and the rights of ordinary people.’

There will also be monthly lectures by guest experts shedding light on the treasures and their history. To find out more, visit: vivacity.org/treasures