When Victorian fossil hunter Alfred Nicholson Leeds found some tantalising bones in a Peterborough clay pit, it was initially believed they could only belong to a dinosaur, so great was their size. It was soon realised that they belonged to a Jurassic fish the size of a small whale. Conclusive evidence of this huge creature proved elusive, however – so much so that it earned the name Leedsichthys problematicus. Then, in 2001, palaeontologist Jeff Liston was sent a single bone from the same clay pits in which Leeds had originally dug, and the hunt was back on. What Jeff and his team ultimately came away with – a jigsaw puzzle of 2,300 bones, now the subject of a huge, ongoing project at Peterborough Museum – was more than just the catch of the day: it was the biggest fish that ever lived. Toby Venables talked to him

How did you first get involved with Leedsichthys?
I was working in the Hunterian Museum at the University of Glasgow, curating a collection there from collector Alfred Nicholson Leeds. He’s from around here – he used to live down at Eyebury Farm – and basically, just as all the clay pits were starting to spring up around here for brickmaking, he was collecting all the fossils that were being exposed. Eventually, he amassed one of the largest collections of fossil vertebrates in the world – completely on his own in his attic in Eyebury – and none of these animals were really known to science. It so happened that he married a woman from Glasgow called Mary Ferrier Ferguson, and when he died, although much of his collection had gone to the Natural History Museum in London during his lifetime, the rest went up to the University of Glasgow.

We have about 650 examples of marine reptiles there just from his collection: marine crocodiles, plesiosaurs, pliosaurs, ichthyosaurs… But there was also this fish, called Leedsichthys, which nobody had ever done any work on, since it had originally been described. The Glasgow specimen, called Big Meg, was over 900 bits – just one animal, and very fragmentary, but even this, when laid out, ran the entire length of a corridor in our museum store. There was nothing to identify any of these bones. The original type description had been done in 1889 by a world-renowned fossil fish authority called Arthur Smith Woodward, yet it is the woolliest description you’ll ever come across! About five years later he published a paper in which he admitted that apart from the gill rakers [needle-like bones in the gills] and the fin rays [thin bones that support the fins], he hadn’t got a clue what any of the bones were. Well, I happened to be looking for a PhD subject, so decided Leedsichthys would be it.

Then, one year into the PhD, in July 2001, I was sent these bone fragments with the message ‘We believe we’ve got a Leedsichthys – can you confirm this?’ Two students from Portsmouth University, Matt Riley and Marcus Wood, had found bits of bone sticking out of a cliff in the Star Pit down by Whittlesey. So, as the only person that had seriously looked at this animal in over a hundred years, the fragments were sent to me. Sure enough, I took one look and said: ‘Yep, definitely Leedsichthys…’ and then came down here that October with Dave Martill, who was my supervisor at the time, and Alan Dawn, a local amateur geologist who volunteered working on fossil material in Peterborough Museum. 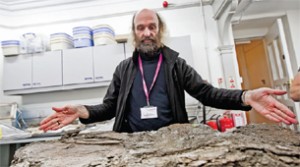 What happened next?
We went down to the Star Pit, and marked out an eight metre stretch of the cliff, along which I was able to find 13 different bones that I was certain were Leedsichthys that were protruding from the clay. We started to get excited, because it was looking like this could be the most complete specimen ever found. We did have one small problem, though, because although it was all quite nicely preserved, the bed had this inconvenient 20 metre high cliff sitting on top of it… So, by June the following year, we had obtained funding from the Palaeontological Association for a Komatsu digger to come in and take away the entire cliff until we were left with a big exposed area around 25 metres by 9 metres, then over the next three months we excavated it, supported by funding from NERC’s emergency funding route, the Aggregate Levy Sustainability Fund, English Nature, Stamford Geological Society, East Midlands Geological Society and the Friends of Peterborough Museum. We were then just using dental tools to uncover very fine bones, so it took a very long time – but these were types of bones that had never been found before for this fish.

Is it true it was a pretty arduous excavation?
The area in which we found the bones of the animal was about 25m wide and 6m front to back. It contains the front end of the animal – the rest having probably been unknowingly taken away with the clay to make into bricks. We were having to work against the clock because we did not know if we would get a second chance to collect the specimen before the pit was disposed off by its owners, and there were so many bones that we were working at night as well, which brought certain problems. We were camped at the pit, by the railway line, and at 3am we’d get trains coming through, so it was difficult getting a solid night’s sleep. Then there was the unpredictable weather, which would occasionally turn the site into a mudbath, so some mornings we’d have to get up and before we could start excavating anything we’d have to pump it all out.

But we found the left and right pectoral fins, and the skull, and took everything away that we could, even coming back for more in the 2003 field season – giving us a mountain of 2,300 bones, the largest of which were protected in jackets of plaster, all excavated in 3,100 staff hours… We know we didn’t get it all out of that pit, either – there was more in there but the pit was flooded before we could get it all. Since then, the material has been here in the Museum, and the late Alan Dawn and his team of volunteers spent much of the next ten years preparing it: in total, they’ve spent another 11,750 hours of their own time thus far in preparing the bones.

Why is this discovery so significant?
What it gives us is the first real opportunity to move beyond what Arthur Smith Woodward did, and start to see what this animal would really have been like, even reconstructing its skull. That was simply impossible before: people were just taking the one or two bones that were known and building a generic skull imagining the rest, but we have enough evidence here to create the first real, three-dimensional reconstruction. Living around 155 million years ago, the animal looks to be the biggest fish ever – certainly the biggest bony fish. It’s a suspension feeder, so it’s very like a whale shark or basking shark, feeding on plankton, from a family of fish called pachycormids which lived at the same time as the dinosaurs, during the Jurassic and Cretaceous periods. They had that niche that whale sharks, basking sharks and some whales occupy now, but all of these pachycormid fish disappeared with the K-T extinction event that wiped out the dinosaurs 66 million years ago. There’s no record of them after that.

Why so big?
It’s the only time that bony fish have ever really got big, so clearly conditions were just right during the Jurassic period. The growth of animals does have natural limitations. You know in films like Them! where they show you imaginary giant ants? One of the problems with that idea is that the size an insect can reach is dependent upon the size of creature their respiratory system can support. There’s a similar respiratory limitation with these fish. They respire using gills, which fulfill the same function as our lungs. These are two-dimensional surfaces, but they are having to supply a three-dimensional volume of fish with oxygen, so as the volume of the fish increases, the respiratory surface has to increase to the power of three to keep up. There are a variety of different strategies you can adopt for keeping energy expenditure and respiration to a minimum, however – one of which is to prey on… [cont]