A major new exhibition at Peterborough Museum this summer tells the story of the city’s role during World War One. RICHARD GUNN talks to Vivacity’s Stuart Orme about the exhibition and how the city came through the conflict of 100 years ago

Visitors to Peterborough’s tremendous Heritage Festival this year can’t fail to have noticed the First World War tank that dominated it. It was there to mark 100 years since the Great War engulfed Europe and then the entire world. Such was the magnitude of the war that, unlike previous hostilities, it affected not just every community but practically every family throughout the nation. Vast numbers went off to fight; many never returned and those who did were physically or psychologically marked by what had happened to them. Back home, the old traditions tumbled. Women worked in jobs that previously only men had done and were finally given the right to vote in gratitude for their efforts, while strict social boundaries disappeared as all classes of people shared similar experiences that united them. Technology advanced rapidly, with the accelerated development of motor vehicles, aircraft, photography and cinema; the latter two meaning that news was conveyed back home with a reality and immediacy that hadn’t happened before. It was an event that utterly changed the country.

Peterborough played a significant role in the war effort. While its citizens went off to fight, its companies turned out vital armaments, machines and supplies. As a major railway hub, troops from all over the empire travelled to and from the city, with one – in what is perhaps Peterborough’s most famous First World War story – never leaving and becoming immortalized as The Lonely ANZAC. Now the role of Peterborough and its people during the conflict is the subject of the museum’s special exhibition, running from 19 July through to 4 January next year. War Stories: Peterborough in the Great War is a very personal and in-depth look at how the city and those from it coped from 1914 to 1918. Using items from the museum’s collections – many of them rarely seen – and including specially-built displays such as part of a trench dugout and a section of a tank, this commemoration of the war’s centenary will shine a spotlight specifically on this region, in the context of what was going on elsewhere.

“The majority of the exhibition is based on what happened to those who went away to fight, particularly on the Western Front in France and Belgium”

Researching and organising it all has been a major undertaking, admits Stuart Orme, Peterborough Museum’s Events and Programmes Manager. But he feels that it’s very important the efforts and involvement of local people are properly chronicled and honoured. ‘What we wanted to do, rather than tell the story of the First World War the usual way through a series of events and chain of battles, was look at it through the prism of those from Peterborough who experienced it,’ he explains. ‘So while we’ve done an introduction that explains in general why and what happened, the majority of the exhibition is based on what happened to those who went away to fight, particularly on the Western Front in France and Belgium, and those who were left behind. It uses excerpts from letters and diaries from locals to bring it to life and give it that very human dimension, of what living through this period 100 years ago was really like. Rather than the quotes of more famous people, it’s primarily using information and sources from local newspapers, letters and so forth. We’ve been particularly indebted to the work of local historian David Gray, who has co-curated the exhibition with us, and whose research has provided much of the information used in the exhibition. It’s very much a Peterborough look at the war itself.’ 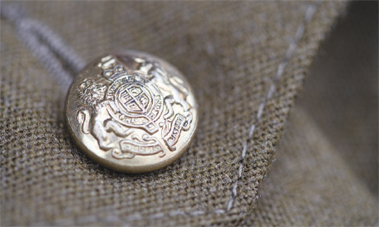 Detail from a WWI uniform, from a photograph by John Moore

Stuart found putting it all together quite heartrending, especially some of the letters. ‘There was one, from a young lad writing home to his parents from the Somme in August 1916, that moved me to tears. It read, “If the worst comes to the worst, so be it. I am ready. Hope for the best, prepare for the worst, and take what comes. That’s my motto. But I never worry. I seem to think I shall come through it all in one lump.” It’s very poignant the way he’s accepted the fact that he might not survive. As it happens, he was very lucky and he did.’ Another letter, from a Peterborough postman in the Bedfordshire Regiment, tells of ‘the shells bursting around us as we smoke fags and eat tinned meat. Tell Bob the Germans can’t shoot for nuts but their artillery is a bit hot.’ He was killed a few months later.

Men from Peterborough served in all three branches of the armed forces – the army, navy and the fledgling Royal Flying Corps. The RFC established an early airfield just outside Stamford. It’s still in operation today as RAF Wittering. ‘The majority, though, joined one of two army regiments; the Northamptonshire Regiment, as Peterborough was part of Northamptonshire at that time, while the other was the local yeomanry, the Huntingdonshire Cyclist Battalion,’ clarifies Stuart. ‘Which sounds very twee, but cycling was the great popular craze of the time and the bicycle was considered a great way of moving troops around quickly and quietly. It wasn’t as impractical as it now seems today, with the benefit of hindsight.’

At least 5,000 to 6,000 men from the Peterborough region went off to fight and around 1,200 were killed. Only one woman from Peterborough lost her life as a result of enemy action. She was… [cont]

Peterborough in the Great War 1 2