Rebellion in America, revolution in France, the birth of industry, the rise of the Romantics and war with Napoleon – it was all going on in the Georgian period. Now a new exhibition at Peterborough Museum captures the drama and dynamism of the times. Toby Venables talked to Vivacity’s Interpretation Manager, Stuart Orme, about what’s in store

First of all, what was the inspiration for this exhibition?
We’re opening the exhibition in December but it will be running through to June 2016 – and next year is the bicentenary of the current Museum building. The oldest parts of the building date back to the 16th century, but the real core of it – most of what we now see – was opened in July 1816 as the grand town house of the city’s magistrate, Thomas Cooke. We couldn’t let that significant bicentenary go past without celebrating it in some way.

Coincidentally, that same year also saw what was essentially the foundation of modern medical provision in Peterborough, thanks to some money left by the local yeomanry cavalry. The local gentry had raised a cavalry unit to defend the area against Napoleon in the event of an invasion, and at the end of the war they had a huge amount of money left in their mess budget, but rather than divide it up amongst themselves decided to donate it to provide medical treatment for those in Peterborough who couldn’t afford it. This led to the foundation of the People’s Dispensary, which then led to the infirmary situated here in the Museum building – the first proper hospital in Peterborough.

We decided to do something that tied both of these significant anniversaries together, but which also looked at the wider history of Peterborough. The Georgian period is a bit forgotten in Peterborough’s history, so we wanted to have a really good look at what the city was like at the time the Georgian kings were on the throne – from 1714 to 1837 – and what it would have been like to live in Peterborough and also to bring out some of the real treasures in our collections that represent this particular period in history.

What can we expect to see on display?
A whole variety of Georgian treasures! Some relate to daily life at the time. There will be Georgian glassware and pottery – various things we associate with the fine dining of the period, and practices like tea drinking, which is one of the big crazes during the Georgian period. There will be paintings from the collection, including two watercolours by Turner, who visited Peterborough during the Georgian period. He was a young, jobbing artist at the time, just passing through, and did these two lovely watercolours of Peterborough Cathedral. 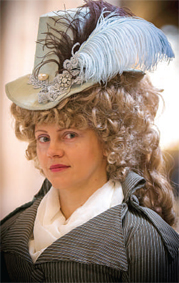 Georgian costumes will be on display

There will also be an opportunity to see some of the original Georgian costumes from the Museum’s collections. Period costumes are always among the most popular items when we do an exhibition such as this – many readers may remember a couple of years ago when we did the exhibition of Edwardian costume, La Belle Epoque, which was hugely popular. We also have some beautiful Georgian dresses and gentlemen’s suits from the period. Many of these items and the Turner watercolours can’t be on permanent display because they’re damaged by light exposure, so it will be a rare opportunity for people to see them.

It also allows us to tell some of the nationally important stories. Obviously we have the Norman Cross gallery in the Museum, covering the establishment of the world’s first prisoner of war camp on the edge of city, but there are many more items in the Norman Cross collection that aren’t normally on display and it’s a great opportunity to see those. You get connections with the industrial revolution with machines becoming part of people’s lives for the first time – and that’s reflected in the number of automata being made by Napoleonic prisoners of war at Norman Cross. They make these little mechanical toys primarily because machines are becoming fascinating to people. We’ll also have some of the poet John Clare’s manuscripts – again, another character from this period, and we have one of the largest collections of his original papers and manuscripts in the world.

What are some of the significant local stories of the time?
One example is political corruption… This is the era of the ‘rotten borough’. While theoretically there was an electorate here, it was a very narrow one, and they largely voted the way they were told by the gentry. Peterborough MP Matthew Wyldbore, who’s buried in St John’s church, is notorious for bribing large portions of the electorate to come and vote for him, and there are political cartoons illustrating these kinds of things from that period. 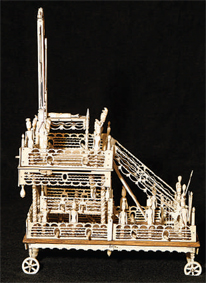 There’s also Lord Orford’s voyage around the Fens from the 1770s. Lord Orford was your typical Georgian rake, who thought nothing of blowing an entire fortune on cards of an evening and was known as ‘the most dissolute man in Europe’. Rather than follow fashion and do the Grand Tour around Europe, he and his friends decided to do a send up of it and instead did a voyage around the Fens… They equipped themselves with some Fenland lighters – traditional, flat-bottomed boats – had them kitted out to the most luxurious standards, and travelled around the Fens, writing diaries that mocked those that people wrote when they were doing the Grand Tour. Orford and his friends were so filthy rich that they’d send workmen ahead to measure up the bridges, and if it was too low to get their boats under they’d have the bridge demolished, sail underneath, and then have it rebuilt once they’d passed by. His diary of the trip is still in print and is very funny. They go around, seeing the sights, basically being a bunch of hoorays, and during that trip he visits Peterborough a couple of times; he has dinner with the bishop at the palace, and describes going horse racing over at Flag Fen.

The Museum itself is a grand Georgian house, of course – will this exhibition allow you to connect to other, existing parts of the building and its exhibits?
Yes, there will be trails around the Museum so you can follow its story, and also a programme of events to tie in with the exhibition, including some guided walks next spring led by the very well-known local historian Stephen Perry. There’s also a programme of talks representing the Georgian period and life.

The exhibition will be running through to June 2016

Look out for details of a Pride, Prejudice & Peterborough special event when we’ll be returning Peterborough Museum to its heyday as a Georgian mansion – from Regency dance to puppet shows, there’ll be Georgian entertainment perfect for all ages!  Booking is recommended for all ticketed events.

Tickets can be purchased from Peterborough Museum on (01733) 864663. For more information please email or visit www.vivacity-peterborough.com