It’s the one thing I think all of us at the Museum wince at internally whenever visitors mention it, and is one of the few things that everyone thinks they know about Cromwell – that he banned Christmas.

Did he really though?

In a word, no… Instead it was Parliament that did! Indeed, Cromwell was absent at the war when the ban was introduced.

The first Christmas ban was in 1644, as it coincided with Parliament’s monthly day of prayer and fasting in the hope of bringing about an end to the war. Many Puritans in Parliament hated Christmas festivities which they saw as increasingly debauched and too influenced by Catholic traditions and practices, so this prayer day provided a convenient excuse. In 1645 Parliament introduced a new ‘Directory of Public Worship’, setting out a new form of worship for the Anglican church to replace the ‘Book of Common Prayer’, which said that Christmas, Easter and other such festivals were no longer to be observed with special services or celebrations.

The final ban came in June 1647, when Parliament passed an outright ban on Christmas, Easter and Whitsun festivities, services and celebrations – although they also introduced a monthly secular public holiday (the equivalent of a modern bank holiday) instead.

By 1652 Parliament had passed laws reinforcing the Christmas ban – with fines for staging or attending Christmas services, and shops ordered to remain open on Christmas day (a very modern debate perhaps?) The pamphlet ‘Vindication of Christmas’ published that year argued against these laws.

What did Cromwell think of these laws? I asked Professor John Morrill as the world expert on ’Old Noll’ and he told me that Cromwell never expressed an opinion on it in his letters or speeches, so we simply don’t know what he thought about it, although it’s worth saying that under the Protectorate the ban remained. 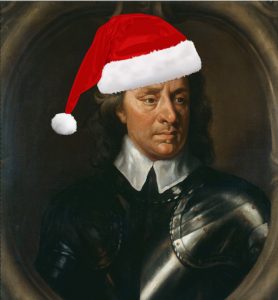 The Christmas ban was unpopular – there were riots in Kent and elsewhere in 1647, although these were as much an excuse for pro-Royalist rebels to cause trouble. By 1656 Parliament was complaining that many people were simply ignoring the ban, that even in London shops remained shut and festivities continued, with MPs moaning about being kept awake by the sound of Christmas parties taking place next to their lodgings! Like many ‘moral’ bans throughout history, it was largely unenforceable in reality, completely impractical and as much an expression of disapproval rather than with any real hope that it would be obeyed. If you have to keep passing a law to ban something every 18 months, it really shows that the ban isn’t working!

As with most Commonwealth/Protectorate legislation, the Christmas ban was removed in 1660 with the Restoration. The ban, its effectiveness – and indeed Cromwell’s association with it – has become part of popular mythology over the last 350 years.