On now at Peterborough Museum and Art Gallery is a new show by Graham Crowley – painter, iconoclast, philatelist, motorcyclist and former Professor of Painting at the Royal College of Art. Just don’t call him ‘artist’... The Moment talks to him about the show, which features selected works from his extraordinary 45-year career. 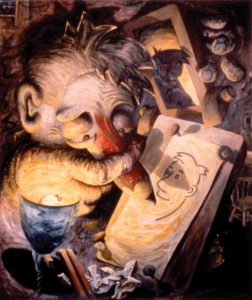 How did A love of many things take shape?
I didn’t want to just do a retrospective or any of that rather predictable sort of nonsense. I thought what I’d do is make a show that actually celebrated things like inconsistency, doubt, intellectual curiosity… And I actually think it’s the best looking show I’ve done in 20-30 years. I wanted it to look like there’s four or five different people at work there. The reason consistency is valued in the art world is because of what’s called ‘product identity’. ‘Oh! I thought you painted geese! Now you’re confusing me because you’re painting chickens!’ It’s about consistency, and it’s about product. But I’m not a product. I paint out of curiosity, not to make money. That doesn’t necessarily mark me out as better, but it does mark me as someone who has made an important decision to work in a countercultural way because that’s where I came from. I’m probably like the last hippie standing… I’m not anti-intellectual – quite the opposite, really. I’m anti-lazy thinking. Anti-assumption. That’s really the theme of the show; over 40 or 50 years, if you’re still making the same painting, you might as well be working in one of those Chinese microchip factories. 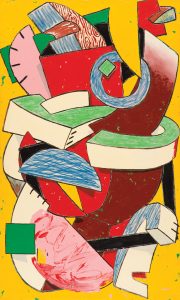 You describe yourself as a painter and dislike the word ‘artist’. Why is that?
I would not be described as an artist, it makes me bridle. When you see the work, you’ll see that it’s made in a very precise way, theoretically and historically. I’m not one of those people who’s going around just expressing myself, like a spoiled 10 year old… There’s this idea that if you paint in this earnest manner like you’re stabbing a chicken, then there’s a kind of integrity to what you’re doing. But that whole thing is nonsense. I’m one of those people who built lighthouses out of matchsticks. I identify with people who make watches, build model railway scenery, collect stamps, you know? Those things fascinate me. It’s about being counter-intuitive. I don’t go for this intuition lark; I’m a serious, full-time, full-headed, full-on painter.

With such broad interests, why settle on painting, particularly?
Going back to ‘68, when I was a student, it was a time when painting was declared dead, and ideas about what art should be were very prescriptive. But that period was also about dissent and doubt and challenging orthodoxy. So, to challenge the orthodoxy, I decided to paint! But while the generation of ’68 was very good with the old revolutionary rhetoric, we were not very good at the practical stuff – actually getting paint out of the tube and getting it to stay on the canvas. So that meant I had to set about almost teaching myself to paint. One way I did that was to go to Europe and Russia and other places and just look at a lot of paintings – look at how they were made, read about them. I’ve got a voracious appetite for information and a scary kind of memory as well. 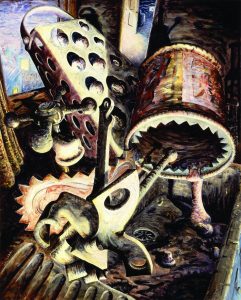 Do you believe that art can be found pretty much anywhere?
Art can be found in particular kind of consciousness. It’s about attitude. It’s about doing things, which is why the show is called A love of many things. Because I think love is closer to art than being a smart Alec or making a load of money. In fact, the antithesis of making art is making money. That’s why I never managed to make a living at painting, and that’s why I’ve always taught, ending up as a professor at the Royal College of Art. But I enjoy teaching, I enjoy talking about painting – at a pinch I may even talk about ‘art’!

The exhibition runs from 14 June to 18 September in 2019 as part of a limited tour including Highlanes Gallery in Drogheda, Ireland.

Find out more about all exhibitions at Peterborough Museum and Art Gallery at vivacity.org.