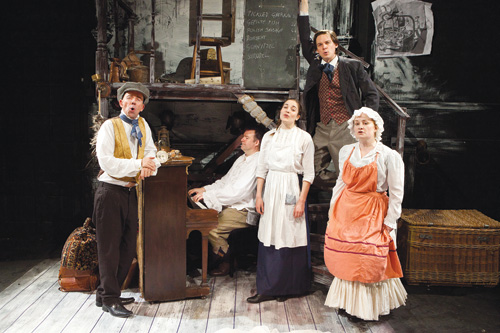 Don’t be fooled by the regional nature of the company – there’s no room for amateur dramatics in Eastern Angles. It’s a fully professional outfit so all actors are salaried and finding a place within the company, even a temporary one, means facing off some very stiff competition. ‘We’ve got about ten full-time staff and once we’ve got companies assembled that figure can double’ Cutting explains. ‘The companies are hired on a project-by-project basis. There are some actors who return to do successive projects but, by and large, I like working with new people. I don’t want things to stagnate so it’s good to see new faces all the time. Like everybody else, we tend to audition in London simply because that’s where most of the actors are. There’s one or two who have located back to this area but most of the young actors who come from this area move to London.’

Auditioning in London may be a necessary evil but Cutting never lets the process affect the integrity of his company – every performance that Eastern Angles gives has a local focus and that’s not about to change. ‘Having a local resonance often makes a show very particular and people like things that are very particular’ Cutting says. ‘One of the big successes of late has been the National Theatre of Scotland’s play Black Watch which is about a specific Scottish regiment but it’s played all over the world and there’s absolutely no reason why that can’t happen with any show.’

Cutting insists that the need for a local angle in no way constrains his creativity or means he has to pass up on subject matter that he might otherwise have tackled. ‘Never’ he says, confidently. ‘In fact, I find it easier because it helps you to rule out certain things. And I don’t believe there’s anything that we can’t do because you can always find a local angle on something that you want to do. It’s a bit like Woman’s Hour on Radio 4. People say “Oh, it’s just about women” but it’s not. If you listen to the show you soon realise that it’s about everything. There’s no subject they can’t cover, it just requires a little spin sometimes in order to see it from a different angle. And it’s not that I don’t like big theatres or big classic plays – I do, I love them – but I just like to do something different and, as a company, we’re all about putting on performances that other people haven’t thought about putting on.’

The venues for some of those performances have been bizarre in the extreme. The Eastern Angles players may regularly perform in orthodox locations like the Key Theatre in Peterborough, but you’re just as likely to see a show being staged in a pub, a village hall, an aircraft hangar, or a potting shed. ‘We did a show (‘The Wuffings’) in Notcutts Nurseries despatch warehouse which we dubbed the largest potting shed in Europe’ Cutting laughs. ‘That was pretty good, actually. We also did a play in a fire station once and there were a couple of call-outs during the performance! We carried on, naturally. One of the calls was a false alarm so the crews managed to get back to catch the end of the show.’

There’s method in Cutting’s madness and choice of zany venues however; they’re not simply chosen in order to gain the company an arty and wacky reputation as he explains. ‘I think it’s part of the work of the company to take theatre out to the places that we call “non-velvet spaces” – places where you wouldn’t normally expect to see performances. Also, places like potting sheds or warehouses or churches have their own histories and virtues. They have their own authority and I think they create a very natural backdrop to plays and other forms of art. The problem with some glossy, purpose-built new buildings is that they’re almost competing with the performance itself. They seem to be saying “Look, we’re every bit as wacky as the art” and I’m not sure that’s a great thing.’ Despite being an actor by trade, Cutting rarely gets to tread the boards these days – he’s far too busy with the day-to-day running of what is now a large and successful theatre company. Not that he misses the glare of the footlights too much. ‘I’m mainly behind the scenes these days but, to be honest, I don’t miss the acting too much. I like doing rehearsal readings or one-off performances but I can’t do the full 50-gig tour any more. I certainly don’t miss that!’