This November, children from across Peterborough will be coming together to make joyful sounds aspart of the city’s Schools Singing Days, delivered by Peterborough-based charity PeterboroughSings! in partnership with Peterborough Music Hub. Peterborough Sings! is based on the belief that everybody can sing, and everyone can benefit from doing so. Within Peterborough they have already achieved great things, with two award-winning and highly regarded choirs –but they have also been spreading the word across the UK and beyond. When the The Moment caught up with Peterborough Sings! music director William Prideaux, he had just returned from an international competition in Riga, where the women’s choir, Peterborough Voices, took the top prize in their class, and Will himself bagged the conductor’s award. We talked to him about the charity’s work in the city, why singing is important, and how it is putting Peterborough on the map... 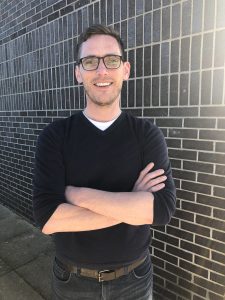 First of all, tell us about the Schools Singing Days that you’re doing with Peterborough Music Hub…
The Schools Singing Days happen twice a year and they’re two or three days at a time. And hundreds of children come through! It’s been held at a number of venues around the city, the next is at the Cresset but we’ve done it at the Cathedral, at the New Theatre, all sorts of places. So, they
work on a set of songs with their teachers in their classrooms to prepare, then arrive at the venue
super excited – and there’s generally a band on as well, so they get to meet professional musicians
and coaches. And you just watch them just kind of unwrap themselves during the day, leading up to
these amazing group performances for the parents and friends at the end of the day. It just makes me smile! It’s the most amazing thing. A cynical person might say ‘That quaver’s late’ or ‘That G sharp’s not sharp enough’ but to go into a situation where you can be so joyous, making music with young people, is just fantastic.

Music seems to have declined in schools, often being pushed out by the emphasis on STEM subjects and pressures of time and resources. Is this a problem you’re trying to address?
We need to be realistic and not pass judgment on people in education, who are working very, very hard – and there are still fantastic schools who do champion singing. But when I was at primary school, music was much more a part of the culture. If you look at statistics on how many households in this country owned a piano in 1950, and how many households own pianos today, you see a seismic change. So, for the primary school teacher who in their training spends maybe two days of their whole year of their PGCE looking at music, building a culture of singing in schools can be really difficult. And the wonderful thing about this work is that one can throw at these kids some of the coolest, most experienced music professionals – who can, without the children even realizing it, just make amazing things happen. Really, it’s one of the coolest things I get to do. It’s the currency of ideas and imagination and aspiration. If you can get some of these people to perceive themselves as people who sing – or even go as far as to, say, perceive themselves as singers – well, that’s a really brilliant thing. And we’re really good at it!

Peterborough Sings! always seems to have a lot going on. What projects are current?
Well, we’ve got Peterborough Male Voice Choir (PMVC), which was originally established in the 1930s – a proper works choir which was established in the sugar beet factory. I joined as music director in 2010, and we added to that a women’s choir, Peterborough Voices. People outside the sector perhaps don’t have much awareness of how these choirs are regarded, but in the male voice choir world PMVC is regarded as one of the best in the country. They frequently win big competitions. And the women’s choir is even better! So, we’ve got those two adult choirs and we’ve created a charity, Peterborough Sings! to accommodate them.

Our third adult choir is Peterborough Community Chorus, and is a mixed choir. Its aim is to be as
inclusive as possible – but you have to be careful with that, because sometimes in making things
accessible you can end up making them a bit mediocre. Our men’s and women’s choirs have homework every week, and they rehearse every single week of the year, except Christmas. So, they’re kind of hardcore groups! But that doesn’t work for everybody, and we found there were
lots of people who really wanted to do it, but couldn’t commit that amount of time. That’s where the Community Chorus comes in. It aims to achieve just as high a standard as the men’s choir and the women’s choir, but the convoy’s going at a slightly more stately pace. So, it’s not making it accessible by making it bland or taking content out or ignoring people’s aspirations – we’re just working out a slightly different route through it.

On top of that, we do various projects. So, both PMVC and Peterborough Voices together are leading a national survey into men’s choirs and women’s choirs in partnership with the University of Sheffield. In February, we have our second male voice choir conference, where people from male voice choirs will descend on Peterborough, sharing expertise and making contacts and growing this community. And then also, we’re doing a Peterborough International Women’s Choral Festival next year, which we’re very excited about as we’ve got women’s choirs from all over the world coming. 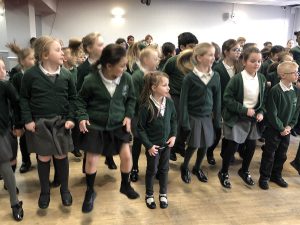 And people still say ‘Nothing ever happens in Peterborough…’
It amuses me that people say that when we have stuff like this going on, with, for example, the head of choral conducting from the National University of Norway coming!

We also have the Royal Philharmonic coming at the end of September. That’s an orchestral concert with PMVC and Peterborough Voices performing with the orchestra. We’ve previously brought the BBC Concert Orchestra and the RAF Band, and we’ve worked with the Royal Philharmonic four times before in Peterborough, but this is the first time that we’ve just put classical music on. In the past we’ve done favourite film scores, opera classics or Last Night of the Proms type of things,
you know, because you can feel confident that it’s going to be a commercial success – and if we don’t get that right, and actually sell the tickets, there’s no point having all the lofty artistic aims. But this is the first time we’re bringing a major orchestra just to do a programme of just classical music – no lollipops at all. And people have just gobbled it up. It’s pretty much sold out. I find that really exciting. And on one level, it is really exciting to think that the Royal Philharmonic are coming here, to Peterborough – but on another, why shouldn’t they? The city has stunning venues, a lovely cathedral, and clearly there’s no lack of demand for this.

A big question: why is singing important?
Where to begin..? I think it digs into quite a central feature of us, a core part of our humanity, this propensity for us to make noises. I mean, when does one sing? The points in one’s life when one sings are celebrations, or when your team scores a goal, or a wedding, or memorial service… Or just when the sun’s shining. I don’t know which way round it is, whether singing is an outgoing communication of ourselves, or whether singing in some way defines us, but certainly connectedness to other people is at the centre of it. And we as a species mark our peak moments with our voices, with song. That obviously relates to why we like to sing and how singing itself makes us feel. If we’re talking about group singing, when people sing together, there’s plenty of science to show that all sorts of physical things happen, like their heartbeats syncing up. The short version is, it feels good! And it’s a way to be able to feel connected to the people around you. The other aspect of it is that it’s a fantastic leveler. If I use my women’s choir as an example, we have people in it who earn five times that what I do, and people who earn nothing. There may be people who have been to every country in the world, or people who have just been to Skeggy on Saturday afternoon, but in a choir they stand side by side, equal, facing the same challenges. And – although I’m trying hard to avoid cliches here – it’s a real thrill when people find their voices!

Can anyone sing?
Yes! Unfortunately, these days, the world would have us believe that singing is a binary thing –
you know, some people can sing, some people can’t. That’s partly X Factor’s fault! But that’s a
shame. We’re hampered by this idea that it’s a gift you have or don’t have, and people have forgotten that it’s like reading or riding a bike or anything else – it’s a skill that can be improved. And, you know, some people are maths whizzes or whatever, but everyone can learn to do better, everyone’s in a different place on their journey with any kind of learned skill. 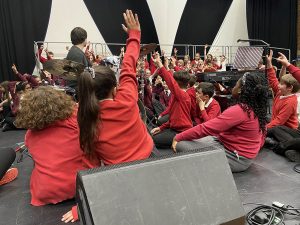 How does the process change people?
There was a really great speaker at one of the sessions at the festival last week who reminded me what a core tenet of choral singing is. It is the placing of the group and of the task above the self. And applying that kind of idea actually solves every single problem the world’s got, doesn’t it? If only all of us could have those ideals, all the time – the ideals of when the choir is on the stage, and that it’s not about you, it’s about the group, and it’s about each individual singer enabling the other singers to do their best and contribute most effectively.

But let me give you a slightly different example. Four or five years ago, a young Lithuanian chap joined the male voice choir – just 24. It was really difficult for him when he started because he had no English whatsoever, but one of the retired guys from the male voice choir ended up giving him almost daily English lessons. Then he got himself a warehouse job. It turns out he is actually a radiologist, but with a Lithuanian radiology qualification, which isn’t recognised here. Then the whole journey plays out with him being able to take the exams to convert that qualification, and now he is working in the NHS. It’s not just a choir that could do this; a sports club or running group do it. But it’s all about that engagement with others, and I think we’re all often surprised by the kindness of other people. People say to me ‘I was made to feel so welcome!’ and I think ‘Well, of course you were!’