Combining stunning design, unseen before aerial performance with simple story telling, Urban Astronaut by Highly Sprung provides a glimpse of a future that might be... Problems surrounding air pollution have grown to crisis point. An astronaut returns to an apparently doomed Earth. But is there any way back? We talk to director of Highly Sprung – and the weightless man inside the space suit – Mark Worth... 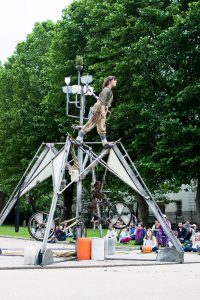 What is Urban Astronaut and how did the idea come about?
In 2015, six million people died because of air pollution in the world, and recent surveys have shown that if we continue chopping down trees at the current rate we won’t have any rainforests in 93 years. We wanted to extend that story, and think about what would happen if the rainforests had all gone, if Earth was almost dying. We theorised that we would leave the planet and only a handful would remain. Well, what would happen then, if generations passed and these people who had used up Earth’s resources came back? Would they have learned their lesson, or would they still be destroying?

How does the story unfold?
There are two different parts of the performance. I start about 50 metres away from what we call the static rig, which is where our female performer starts the show, and move gradually towards it. So, you can either followmy story, which is an astronaut coming back to Earth and wondering what’s going on, and then you have Hope’s story. She has been abandoned on Earth and is finding a way of recreating life after the rainforests. 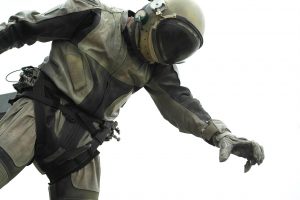 How do you become weightless?
We have a flying machine! It takes three people to operate it; during rehearsal we spoke about it as puppetry, with me as the puppet. The flying machine itself works almost like a seesaw. It’s based on a pyramid, with the seesaw at the top, and there’s one-and-a-half times my weight on one end of it and me on the other. I get lifted up about 20ft – or 6 metres – in the air, and I do 360º rotation on the end of it as well.

Controlling where you go in real zero gravity is a challenge – is this difficult to control too?
As I promenade through the space I sometimes interact with the public – but a lot of members of the audience don’t realise that I have no control over where I go or how I spin. It’s completely in the hands of the guys behind me. That’s why I feel like a puppet; I’m just there to animate, and they make me look good! The machine itself is the weight of a small car, so we’ve got one guy pushing, one guy steering and the other operating me. I’m locked into the aerial harness with four locks on my hips, and when it comes to the actual performance all four of us have to work together to try and pick up on different signals from each other. The spins sometimes go up to 70-80 rotations per minute, so it can get quite fast, and if it stops horizontally all my weight is on three inches of metal bar. That can be a bit sore! 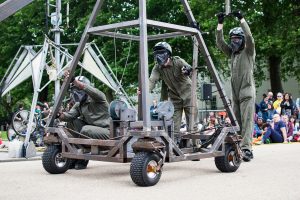 Where do you get a machine like that..?
I approached an engineer and asked if he could build it for us. I drew a picture of it and he described it as the most dangerous thing he’d ever seen! So I asked how we might refine it, and he came up with a couple of suggestions and has made a much safer version. Actually the safety procedures behind it are very very tight – and we’ve been using it for two years now, so everyone knows their role and how to work around the machine.

Do you speak any words during the performance?
There are no words spoken live. There are some diary entries and extracts that are part of the audio soundtrack, but anyone watching could understand it. We’ve had some amazing comments from people. We’ve had grown men in tears. And an amazing lady came up to us in Birmingham and said: ‘I’ve been talking to my daughter for the past nine years, trying to explain to her what climate change is and how we need to do something about it and save our planet, and you’ve just done it in 20 minutes…’ It’s a story that connects with everyone, but also we wanted to bring the idea of weightlessness to people – something out of the ordinary, just having an astronaut bounce down the street, and taking people to a different world and different time.

Key Feste will run from 12:45 to 8pm on Saturday 2 Sept and 12-5pm on Sunday 3 Sept. For the latest updates, visit: www.vivacity-peterborough.com/theatre-arts/key-feste/