Jools Holland needs little introduction. Throughout his career – on his show Later... and elsewhere – the former Squeeze keyboard player has played just about every style of music with every conceivable artist, and this October he’s bringing his renowned Rhythm & Blues Orchestra to East of England Arena. Moment editor Toby Venables talked to him.

To begin at the very beginning… What was it that first turned you on to the piano?
My grandmother had a piano that was given to her by her mother – who was called Britannia – as a wedding present, in Greenwich in 1938. They had it in their front room, and in the Blitz the windows blew in and the piano got charred, but still worked. In the 60s, when I was small, my grandmother would put me on her knee and say: ‘The Nazis got the outside, but look…’ and she’d lift the lid and inside was all nice wood. It also played piano rolls, so I could play old songs like Red Sails in the Sunset. Then my uncle, who wasn’t very much older than me – about 17 when I was about 8 – used to play a bit of boogie woogie piano, and I’d hear this and it would make me so excited. So I got him to show me, and then drove my poor grandmother and her neighbours mad by playing the piano endlessly. And that’s how I learned, by going mad on that piano. My poor mother now has dementia, so recently had to go into a nursing home, and so I’ve now moved that piano into my house. It’s like having a very old friend who has never changed. It’s a jangly old thing, but to me it has the sweetest sound.

Rock and pop can be very ego driven, but with you it seems entirely the opposite – very much about the collaborative process…
Certainly with my big band it’s about that, because with that band you’re going to hear all the different voices – the saxophones, trombones, trumpets – as well as the guest singers. It’s as much about the instrumental music as it is about the individual singers – a great celebration of the musicality of everyone involved, and the fact that everyone fires off of one another. Ultimately, I suppose, we’re all trying to be the servant of the music. That’s what’s most important. Sometimes that might be just a solo instrument, at other times the whole band. 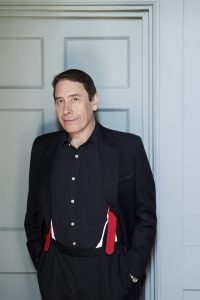 It’s a big band in all senses of the phrase – 19 musicians and singers. How do you get a band like that together?
It’s evolved. But it’s very unusual what we are. There are other big bands, but not one that has been together with the same people for so long. But it is remarkable how it’s grown. Gilson Lavis, who’s the drummer, used to be in Squeeze with me, and in the early days I used to bring him on saying ‘Please welcome my big band!’ and just he came on… But then we got a bass player, and met a guitar player busking in Edinburgh [Mark Flanagan] and he was so great we got him to join us. Then we added a four-piece horn section. We had dear old Rico Rodriguez on trombone, who sadly is no longer with us, and he brought his friend Michael ‘Bammi’ Rose on sax to add that Jamaican ska element. Then we realised that we almost were a big band, so we added a few instruments to complete the configuration. So it was a natural evolutionary process – and it seemed the more people were in the group the more people came to see us. In theory, if we had 500 people on stage we’d fill a stadium…

But unlike other big bands we’re not just playing old big band music – although I love that and we do a bit of it. A lot of the stuff is our own, or ska, or blues, which weren’t really what a big band did, and when we have guests we’ll make a big band arrangement of their hit songs, so we’re not really trying to emulate the old big bands. For me it’s about playing music I love.

Tell me about your singers for this show…
Our guest vocalist, Eddi Reader, has just got one of the most fantastic voices. There was a film made about the young Orson Welles, Me and Orson Welles, and they wanted me to do the music and to get somebody to sing, and out of all the people in the world I got Eddi to do it. She just has the most perfect, pure voice – one of those voices that really does sit with the big band so well. She comes from folk and jazz – all these different elements thrown together in such a way you can’t really put a name on it. But her hit with Fairground Attraction, Perfect, is such a great swing song. Then we have the extraordinary Ruby Turner. There is no one living like Ruby – she’s like a blues singer from the 1930s in attitude, spirit and the fire, but then she can switch and sing a hymn and everybody’s jaws drop off. She has an energy that is just unbelievable. I have the privilege of seeing her over the edge of the piano, and literally every time she comes on it makes the hairs on the back of my neck stand up. Then we’ve got Louise Marshall, who is amazing at interpreting things I’ve written – fantastic technique and such a beautiful voice. She can sing anything and make it come to life. So we have all that and all the instrumental soloists, so it can be quite hard to get it all in at times. It’s also hard to get us all in the dressing room.

You’re playing wildly varying venues this tour, from cavernous corn exchanges to gardens in stately homes. Do you adapt the show for each?
An old master once told me you have to play to the room. That means that if, for instance, we’re playing outdoors and it’s pouring with rain or cold, then you switch into gear to lift the mood and get people warmed up. By the end – and this is what I love best – it’s pretty much always degenerated into a boogie-ska frenzy, but those earlier stages you want to read the room and respond to what’s going on. 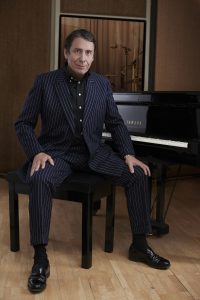 I know sometimes you change the set list on the fly – how easy is that to do with a big band?
We’ve got quite a big catalogue, and a lot of the members are also in bands of their own. But I remember guests coming in and starting to sing something and they all just lock in and play it. A lot of people in the band read music but some of them don’t and so we’re working from what the call ‘head arrangements’, so, it’s never the same twice. We have some of the same songs in but we have to keep changing to keep ourselves excited. Some artists do their hits and that’s it, but we want to get the feelings right, really. I think that’s the most important thing – communicating that feeling – and I suppose that’s why I keep doing it; it’s that pleasure of seeing people’s heads start to move and their feet start to tap, and you realise you’re communicating the way you feel through the music. That’s a great thing to do. If we just played the same thing every night, we wouldn’t have that feeling of excitement, and if we didn’t get that feeling then the audience wouldn’t. You can’t expect anyone to love your music if you don’t love it yourself. I just love playing, and it’s only through people coming to see it that we’re allowed to do it. The audience makes it possible.

Finally… There are a lot of music biopics around at the moment. What are the chances..?
Sadly, it’s out of the question. With Marlon Brando and Olivier dead there’s no one left to play me…