"One of the most gifted singers & writers in contemporary blues - MOJO "

After a memorable concert with Dana Gillespie, we’re very excited to welcome IAN SIEGAL to Shakedown Blues on his 14 date Solo UK Tour, which includes the legendary 100 Club in London. AND of course, as one Blues journalist described it:

Back in 2019 we were lucky enough to catch IAN SIEGAL at Dingwalls in Camden, and what an incredible performer of both blues standards and his own songs. Here’s how Ian sounded Live at the Royal Albert Hall released as Man & Guitar – MOJO Blues Album of the Year (2014):

For his 2019 solo ‘unplugged’ tour, Ian has recorded some of the songs just the way he will be playing them on the tour.

And he’s no stranger to winning industry awards. Lots of them. At the inaugural British Blues Awards in 2010, Siegal won Best Band. In the following three years, he collected awards in various categories including: 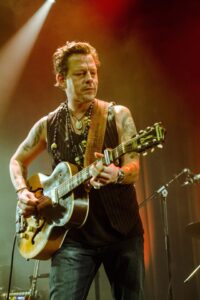 To ensure safe and comfortable conditions and to operate a COVID safety venue, tickets are strictly limited to 90, so to avoid missing out, order your tickets here: