For over a quarter of a century, the Horrible Histories books have been the best and funniest way to learn about days gone by. Ahead of its West End season, the stage adaptation of Terrible Tudors will be appearing at the Key Theatre in Peterborough in June. We asked author Terry Deary all about his fabulous, fun, and informative creation.

When you wrote your first ‘Horrible Histories’ did you ever imagine the idea would go on to be so successful?
Yes, I think most authors believe their work will be a huge success, even though most books disappear from print after a couple of months. It’s that hope that keeps us going. When I wrote my very first fiction book 44 years ago, my publisher said, ‘Writing is like a sausage machine, and you have to keep stuffing in at one end, so something comes out the other end – it’s like a process’. I kept writing book after book – fifty fiction titles before HH came along – but I never imagined I would have a series which would become first of all, iconic, and secondly, that would still be selling more than 28 years later. Roald Dahl has managed that, but I can’t think of anyone else who is still selling so well. What usually happens is that people have sensational ideas, and they sell really well for a while, but they do tend to come and go. It’s a shame you can’t predict which are the ones that will last! 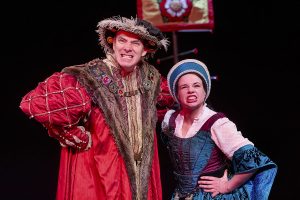 What do you believe is behind the popularity of ‘Horrible Histories’?
Nobody had done anything like them before, and they filled a desperate need. There were factual books for children, but they tended to be written by experts on the subject. They knew their history, but they didn’t have a clue how to write about it for children. So, with ‘Horrible Histories’, instead of
an expert who couldn’t write, they approached a children’s author who knew nothing about history. I get all my facts from research. I do my research and say, ‘You will never guess what I discovered’ and ‘Phwoar, this is great!’ It’s actually a simple answer. I say I’m not an expert in history, and this is why they work. Down the years people have tried to copy ‘Horrible Histories’ by doing funny fact books, but they never get it right because they use experts, not writers.

Have you ever found any facts which were too horrible to include?
Well, the publishers have said so! For example, when the Vikings invaded, they became settlers and had families here. But these settlers were as vicious as the Vikings, and when they invaded a Viking village they would find a Viking child, swing it by its legs, and bash its brains out. But when I told the publishers, they said ‘We can’t have that’ which is strange, as I can’t see it’s any worse than some of the other parts which have been included.

On the other hand, there are facts which some people feel you can’t talk about, say in World War II. For example, when we came to the television series, we were sitting round the table, and we talked all about the bombings and the blackout and got that sorted. Then we got to the Holocaust and there were six or seven pages, and they read them in silence, and then said, ‘Of course we can’t do that’. I am actually quite proud of the fact that television can’t do the Holocaust, but I can.

Why does ‘Horrible Histories’ work so well on stage?
We work really well as a team. Birmingham Stage Company actor/director Neal Foster is very knowledgeable and experienced in children’s theatre. BSC has been going for 28 years now. I’ve been a professional actor for nearly fifty years. So, between us, we know what we’re doing. We’re not trying to write literary stuff. It isn’t the books on stage, we’re not determined to be true to the spirit of the books, we’re writing for theatre. So, it’s fresh and original.

So, what next for Terry Deary?
The ‘Horrible Histories’ books have been published for 28 years now. Many people who read the books when they were young are in their twenties or thirties now, but still remember the enjoyment they got from the books. For those readers I created a new series called ‘The Peasants Revolting.’ They’re a sort of ‘Horrible Histories’ for adults. ‘Peasants’ Revolting Crimes’ was published by Pen & Sword in 2019, and the second book, ‘Peasants’ Revolting Lives’, appeared in June 2020. If you enjoyed ‘Horrible Histories’ when you were younger, you may enjoy these adult books. I’m now working on more theatre projects and a TV series. In my hobby of running, I’ve done the Great North Run half-marathon 22 times in its 40-year history. I’ve written a movie script that’s being released for the fortieth running of the event. There are also more new ‘Horrible Histories’ titles rolling out. 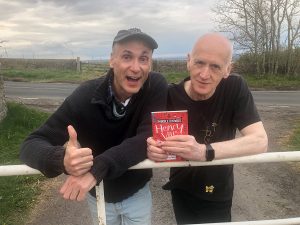 After all this research, are you now an accidental history expert?
Definitely not! I know very little about history because I can’t keep it all in my brain. I’ve only got about three brain cells! I often forget what I’ve written, because I can’t hold all those facts. I pick up a ‘Horrible Histories’ book, maybe to revise it, and I read something and think ‘I never knew that!’

But I can be an anorak with facts. I was watching ‘Horrible Histories’ on television and up came the ‘Vile Victorians’ and along came Burke and Hare, the body snatchers. And I was jumping up and down and shouting at the television ‘No! They were 1827! Twelve years before Victoria came to the throne. They weren’t ‘Vile Victorians!’ Now that is anorak!