Back in February 2020, we interviewed comedian and writer David Baddiel ahead of his nationwide tour, which was due to come to the Cresset. A month later, everything was cancelled. But now, happily, it’s back! David Baddiel’s standup show Trolls: Not the Dolls (Cresset, 15 Sept) tackles the question of whether to dignify trolls on social media with a response. The conventional wisdom says no, but for a comedian, simply ignoring a heckler goes against the grain... David Baddiel also believes that social media has shifted the goalposts, and that only by confronting can we really deal with the issues. Taking that principle to its ultimate conclusion, he also wrote and presented a hard-hitting documentary for the BBC entitled Confronting Holocaust Denial with David Baddiel. Moment Editor To by Venables talked to him the morning after the documentary aired...

The documentary expands on some of the themes of your standup show but is, perhaps understandably, a lot less funny… How has it been received?
The reaction has been amazing actually. Certainly on social media and elsewhere people have been very effusive in how they reacted, and it’s been very shocking for a lot of people, which is good. I wanted to do a piece of television that told people about something that was difficult but
which also engaged them and gripped them for the hour, so they stayed with it even though it was difficult information, and it seems to have done that.

It’s very much based around talking to people face to face. Do you see that act as a kind of antidote to the impersonality of social media?
That’s a good question, and I do think there is a connection. But the standup show very much rejects, for me as a comedian, the idea of ‘don’t feed the trolls’. It says, ‘Look, I deal with them in this way, I treat them as hecklers and I make comedy out of it’ – and in a larger sense there’s possibly a way forward with this very dark, even very unpleasant thing that we’ve created which is to try and disarm it with comedy. I think the documentary had elements of that too.
Obviously there are people who would say ‘Don’t deal with Holocaust deniers; ignore them’ – but my position in the documentary was that I’m not sure that’s right any more, because it is proliferating online. It’s getting bigger, and to some extent you have to find a way of exploring it and dissecting it and confronting it, and part of that was when I eventually met that Holocaust denier to sort of make fun of him – to try and understand him, but also to make it clear how ludicrous his position is. In that sense there’s quite a strong connection; the ‘don’t feed the trolls’ mantra is like ‘don’t feed the Holocaust deniers’ but it’s not something I necessarily believe any more, even though I can see the validity of it.

In the documentary, when you talked with Holocaust historian Deborah Lipstadt and her lawyer Anthony Julius, who fought the historic action against Holocaust denier David Irving, he was very much against you confronting them…
Yes, but Deborah’s position is slightly different from Anthony’s. He is totally in the position of ‘don’t give them any airtime’ but Deborah in that same scene says‘…or do you move forward by challenging them?’ And she wrote Denying the Holocaust which led to the David Irving trial, and in its own way that was throwing a spotlight on Holocaust denial. So, I don’t think Deborah would agree with Anthony that the best way forward is always to ignore them, because she literally wrote the book on Holocaust denial and is the world’s foremost historian of the phenomenon. There are always going to be differing opinions about this, but I get the impression – just empirically, from the reaction – that the programme has achieved something, which is that more people are now aware
of it, and are aware of it as a problem and a danger to be challenged. 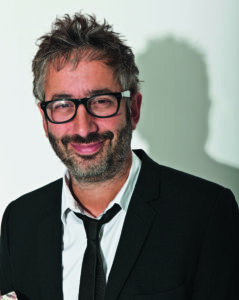 You make it clear in the documentary that it is social media that has changed the situation, and you also confront Facebook about their hosting of Holocaust denial…
In a way, the Facebook thing was more important than the conversation with the denier because the Facebook thing is about ‘How do you justify putting this on your platform if your own ethics are that you don’t allow hate speech?’ I don’t believe Facebook came up with a valid defence for that, but I think gradually that will change. Actually, Sacha Baron-Cohen texted me last night to say that he’d heard the programme had gone very well – he couldn’t see it because he was in LA – but he’s on this mission to get Facebook to change the way it deals with it, and he thinks it will happen as a result of stuff he’s doing and stuff I’m doing.

Do you think it will change?
As I say on the programme, I’m a proponent of free speech – but Facebook themselves have a policy of not allowing hate speech on their platform. The trouble is, Holocaust denial is always hate speech. It’s a really simple argument; no one denies the Holocaust just because they’ve made a simple historical mistake. That never happens. But that is their argument: ‘It’s not up to us to tell people they’ve got history wrong…’ So yes, I think they will change, but they do come from this weird, Silicon Valley position of ‘everything is allowable’

Can we talk about Dermot, the Holocaust denier you met..?
I understand why you wanted to talk to him, but considering he regards all Jews as a terrible, evil threat, what made him want to talk with you? What’s in it for him?
I agree, it is so weird. I was sitting there thinking: ‘So you think I’m responsible for perpetrating a series of lies that have fooled the world, and for killing Christian babies, and I’m controlling the BBC, and I’m just sitting here, listening to you tell me I’m doing this…’ You don’t often see that level of offence on TV! This bloke was basically saying that I am the Devil, over and over again, but in kind of a reasonable tone.
And when I asked him whether he thought Jews were still ritually sacrificing Christian babies he said: ‘Well, you would know more about that than I do…’ Obviously this is why I fall back on comedy, because either I do get really angry and punch him in the face – which even though I said in the documentary I might do, is not really part of my nature – or I stick to what is in my nature, and make fun of it. That’s eventually what happened. But he was very keen to meet me, as were quite a lot of other Holocaust deniers, because at the end of the day a lot of them are desperate people who want their opinions to be heard. It’s them desperately wanting attention for their extreme views.

Is that the basic problem with social media – that it is performative, with every conversation taking place in front of an audience?
I talk about this a lot in the show. And I should just stress that the show isn’t just about the obvious trolls, it’s about lots of aspects of social media, and also how I’ve used my Twitter feed as a diary for the last eleven years, so there’s lots in it about Brexit and Trump and antisemitism, but also about me growing old, and kids, and about some of the mad reactions I get to some of the most
innocuous things I’ve posted. But yes, one of the points I make is that we never used to write everything down like this; language itself has distorted how we communicate because we used to just talk to each other. Now everyone writes stuff down, and they write it down in public. Those two acts, having to form your opinions into written words, on a public stage, are a very different way of communicating. Everything gets turned up as a result – everyone gets angrier and louder, because they know they’re performing in front of a potentially global stage.
Any tweet can go viral, and that changes completely how you communicate. Coming back to Dermot, is he really wanting to put his opinions across or does he just want a global stage to fill the gap in his soul? 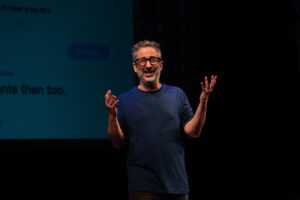 Personal testimony is central to the documentary. Do you think that lays things bare in a way that social media can’t?
A lot of the time, when you see something on TV involving storytelling, it’s the person that makes you know it’s true. Rachael Levi, the Auschwitz survivor I met in the documentary, is a great example of that. Obviously there’s a lot of evidence that it’s true, but also I just don’t know what kind of person could listen to Rachael Levi tell her story and think that she’s lying. You’d have to be an extraordinarily stupid person, but also extraordinarily committed to your own cognitive bias, because everything about her says: ‘This story is true’. That’s really why I decided we should edit the programme in that way, with Dermot’s interview back-to-back with Rachael’s interview, because I wanted the truth to be so clear after this ludicrous encounter. But I think it’s true what you say, that sometimes with a personal story there’s a connection that is hard to describe, but you know when someone is telling the truth, just by listening.

It was once suggested to me that Jews actually have a different, more personal relationship with history. Do you feel that’s true?
I think one of the things that is sometimes not understood by progressives is that most Jewish people do grow up – and certainly I did – with a very strong sense of having been persecuted and massacred throughout history. I don’t know if there’s a personal connection between me and Moses but I do remember walking around York and coming across the site of the York massacre. And because my mum only just escaped the Holocaust and lots of my relatives were killed, the York massacre, even though it happened in the 12th century, doesn’t feel alike a distant bit of history. It just doesn’t. So in that way it’s true; just by the sheer repetition of persecution means that you connect with it and are aware of it in the way that you’re talking about, because it’s live within you.

Do you think the impersonality of social media actually creates more of a hunger for live shows such as standup?
Maybe… Standup has always been popular, but maybe… Even though the show is about social media and there are lots of examples from my Twitter feed up on a screen, it is actually a very intimate show. I connect with the audience and they find out lots about me that is not on social media. There’s lots of storytelling, and it creates a very human warmth, which probably is in contrast to the technical coldness of Twitter. At the end of the day it’s me talking
to an audience and sharing stuff. But I also talk about the upside of social media. Towards the
end I say: ‘Look, it’s a terrible place, but here are some of the amazingly funny things that other people have done in response to things that I’ve said or to me dealing with trolls…’
And the light is that there can be a communal, comedic way of dealing with the badness. That’s uplifting, I think. And in a way, you can only do that face to face – you kind of need someone to lead you through it. 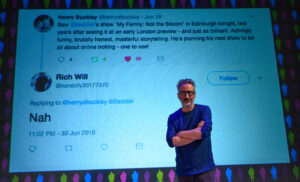 For full dates and info, visit