There are 2 sides to Diane Nowell, glamorous pop artist who has burst onto the greater Peterborough scene in the last few years 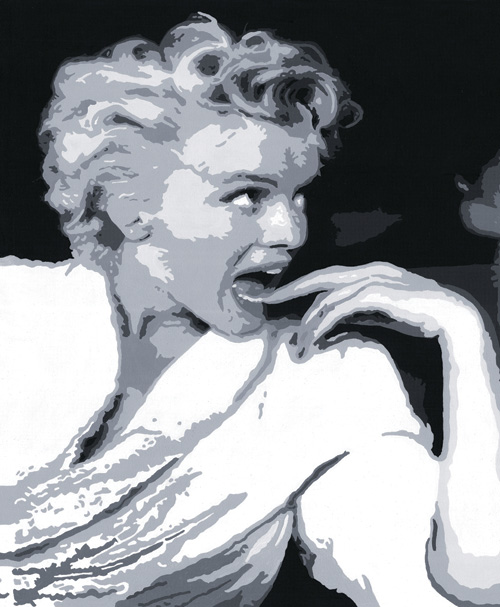 With a confident, larger than life personality, she has a no messing approach to life’s challenges with little time for so called fine artists who snub her art form. And yet like so many of us she has had her battles with insecurities and self- image and in that sense her art has been her saviour giving her a voice to express her unique qualities and talents and more importantly restoring her self-worth.

Diane has not always been as confident as she is today. She looks back with great respect and fondness to Mr Hodgson, her art teacher.

Growing up at school, I never really felt I was worth anything. Like so many others I was quite badly bullied, but Mr Hodgson was a real inspiration to me. He had a real passion for his subject and really encouraged me. I just felt so good in his classes and I loved art because of him. I see now that very early on, art for me was linked to feelings of self-worth and Mr Hodgson nurtured me and my talent

Diane was eager to leave school and at 16 joined the army which gave her the structure and security she craved for. “I worked as a health care assistant in the army and loved it. I latched onto its strict codes and order. It gave me the stability I desperately needed”.

Diane eventually became a military wife, started a family and settled in Cyprus. Eventually moving to the UK, she became a team leader at Sainsbury’s. Life seemed to be going well and Diane made several attempts to finally eradicate her childhood demons.

I actually appeared on the Extreme Makeover UK TV programme to change the way I looked. I talk about this openly. I loved it. It was just fabulous. But of course this only remedied the surface and it all caught up with me in the end in 2010 where I experienced great mental suffering. It was at that moment that my talent and passion for art resurfaced and here I am barely able to keep up with all the galleries who want my work and all the commissions I’m being asked to paint and I realise that I am worth something. Art continues to be my on-going cure and therapy

I have to be totally satisfied with each portrait I do. I may have nearly finished and if there is something not quite right, I will abandon it, which sometimes infuriates my family. I have to capture the essence of a celebrity, the character, the attitude, take for example this recent painting of Sid Vicious and Nancy. I had to capture the sultry look and I think I succeeded 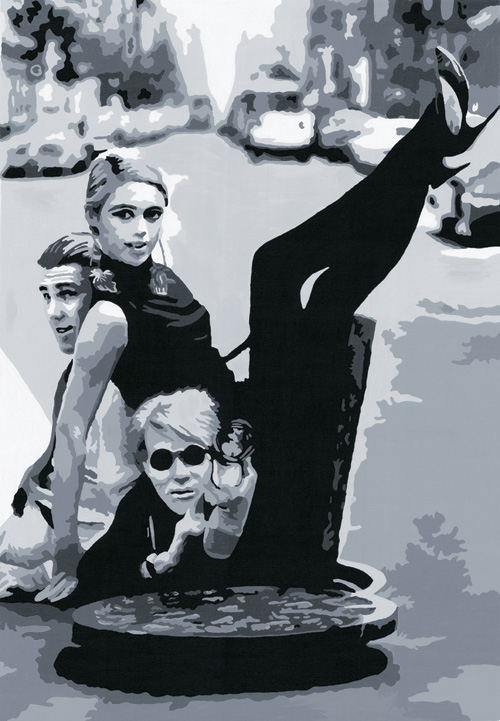 she explained smiling. Diane was keen to explain to me how she achieves such great expression in her portraiture. Although I’m not going to reveal her precise methods, the process involves preliminary work with photo shop, then an interpretation of that preparatory work achieved completely by hand drawing and painting in 3 colours maximum onto canvas. “Other artists sometimes doubt how I achieve this but I have little regard for this. I have given so much pleasure to people painting their favourite icons or their loved ones and my work is becoming more and more in demand at home and abroad.’

Diane started exhibiting in the Realitas Community Arts Centre in Peakirk a couple of years ago and has sold consistently well there. For me it was her work which distinguished itself from the rest when I first visited. I knew her work would really resonate. Through Neil Macgregor-Patterson, the centre’s founder, her work featured on a BBC news feature. She then exhibited at the City Treasure’s Exhibition at Harriet’s Art Gallery in October 2011. Since then she has exhibited in The Green Room, Lafayette, Louisiana and has been invited (courtesy of Carey L McCue) to show her work in James Harper’s Fine Art Gallery, Ormond Beach, Florida in the 2013 exhibition “Across the Pond” which will feature her Beatles, Sex Pistols and Andy Warhol images. Her VW bus is featured in the guide for the Fringe Festival in Philadelphia and she has been invited to join the London based Arts Park Gallery.

Diane’s work can be viewed at Realitas Community Arts Centre Peakirk and Art in the Heart Peterborough. Commissions welcome.