It has just been announced that Peterborough Cathedral has won a nationwide competition to host Tim Peake’s Soyuz spacecraft and a Space Descent VR experience from Saturday 11 August until Monday 5 November 2018.

The Cathedral was chosen by the Science Museum Group from a shortlist of five venues across the country, including Millennium Point in Birmingham and The Forum in Norwich. The venues entered an open competition last year to win the opportunity to be the sixth location on the spacecraft’s national tour.

Soyuz TMA-19M was used by Tim Peake for his Principia mission in 2015-2016, while the Space Descent VR, which accompanies it in the exhibition, is a unique virtual reality adventure that brings the experience alive using Samsung Gear VR technology. It is expected that Tim Peake’ own spacesuit will also be part of the display, as well as the parachute used in the spacecraft’s return to earth.

Ian Blatchford, Director of the Science Museum Group, said: “It is rare to see the star objects in Britain’s great museum collections touring the length and breadth of the country. It is even rarer to see a spacecraft in a Cathedral. I am extremely pleased that thousands of people from all around the diocese of Peterborough will have the chance to see this extraordinary artefact of recent space history on their doorstep, and I cannot wait to see the Soyuz take the Cathedral’s 900th birthday celebrations out of this world when it arrives in August.”

The announcement was made at the launch of the Soyuz exhibition at the Museum of Science and Industry in Manchester. The Dean of Peterborough, the Very Revd Chris Dalliston, who attended the Manchester event with colleagues from the Cathedral, said:

“I’m absolutely delighted that we shall be hosting the Soyuz spacecraft in Peterborough, especially in the year we celebrate the Cathedral’s 900th anniversary. Throughout the centuries, science and religion have been connected by a shared delight in the created world, a sense of wonder about its origins and destiny, and a desire to seek for the mechanisms and the meaning behind our universe. We hope that many who come to see the Soyuz in our wonderful and ancient Cathedral will begin to get answers to both those questions, and delight in the astonishing inventiveness of humanity and the extraordinary creativity of God.”

Following its exhibition in Manchester until 13 May, Soyuz will go on show at the National Museum of Scotland in Edinburgh before coming to Peterborough in August. 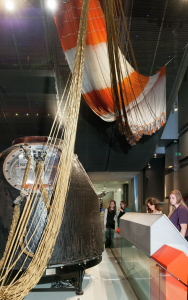 Where will the spacecraft be in the Cathedral?
Soyuz will be displayed in north transept and aisle inside the Cathedral. Services and events will carry on as usual during the exhibition, providing an added attraction to the existing programme.

What was involved in judging the competition?
After an outline application, shortlisted venues were invited to submit a more detailed plan of how they would use the spacecraft’s visit to develop activities for schools and other visitors. Representatives of the Science Museum Group visited the Cathedral to assess the location and gather more information. The Cathedral was then selected as the winner by an expert panel of judges from the Science Museum Group, Samsung and the UK and European space agencies.

What will be the admission arrangements at the Cathedral?
Tim Peake’s spacecraft – complete with its 25-metre parachute – is, like the Cathedral itself, free to visit. The Space Descent VR will be available to visitors aged 13 and over for an entry fee.

Donations from visitors towards Cathedral running costs are always welcome.

About the Soyuz TMA-19M descent module

About the Science Museum Group

The Diocese of Peterborough