What do you expect to find in Whittlesey? An expanse of fen? A few good pubs? An ancient and slightly strange winter plough festival (AKA the Straw Bear)? How about a collection of close to 30,000 rare and collectible bits of vinyl..? Unexpected though it may be, the last of these is exactly what you’ll find at Bob’s Records – an Aladdin’s Cave for analogue music lovers that rivals the best record shops in the land. The Moment talked to owner Bob Athow about his passion for vinyl and how it’s helping to put Whittlesey on the map...

This is certainly quite a collection – but how did it all start?
It started just as a hobby, really – and in a way it still is. I’m now 78, so the 60s was my era. I had a fairly big record collection but then got divorced and ended up selling 800 singles for six quid and 200 LPs for another six quid, and sort of lost interest a bit. But then I lost my dad and my mum rang me up, 92 years old, and said: ‘I’ve got a present for you…’ She gave me my dad’s stereo system and I started collecting records again. That’s basically how it began!

How did you get from there to running the shop?
I was only collecting them for myself to begin with, but then I started getting phone calls from people asking if I had certain records, so I thought I’d do a few record fairs. I was doing a Saturday and Sunday every week and travelling miles. Dealers were buying off me and then the punters were buying off the dealers, and paying more money for what I could have sold straight to them. Then a little shop became available here in Whittlesey – just 20 foot by 20 foot – so we hit the record fairs on the head and just did the shop. Soon it just wasn’t big enough, and then this one became available along the road, so we moved in. We’ve been here three years – but if I hadn’t got my dad’s Technics and started collecting for myself again, none of this would have happened. All I’m doing, really is giving myself something to do at 78. I enjoy doing it, and it’s all grown from there. I’m never going to make a living out of it – and it’s Whittlesey! I have problems getting people in – but I never have problems getting them to come back, because when they’re serious collectors they don’t mind travelling 40-50 miles to get what they want. And we’ve got loads and loads of stock. To give some idea of the scale of it, we’ve got about 27,000 LPs on display and a good few thousand singles. Basically, I’ve got a lot of records! And if you want to buy the lot, lock, stock and barrel, come over. We’re always ready for a deal…

Is this all possible because you have time to find those rare old records?
Yes – but the end of the day, no matter how valuable it is, you’ve still got to find somebody to buy it. I don’t do the internet, but my son does a lot of the research. It takes him hours. It’s all about numbers in wax, colours of labels – you have to chase all these things down and it’s not a two minute job. Then you’ve got to trace who sold it and what they got for it to come up with a price in the first place. You’re learning all the time. Often if I see something we haven’t got I buy it and take a gamble. And if you want a Wombles record you’ve only got to phone me and come pick it up! Pretty much anything early will have someone out there interested, and I know a lot of people who I can phone who are looking for particular things. Lots of people ring up for stuff and we have want lists as long as our arm, but whether we can track them down, we just never know. And you can’t know everything. Sometimes you pick something up just hoping for the best, and sometimes that works and sometimes it doesn’t. I picked up a reggae record the other day worth about £100 and sold it with one phone call. But you never know who is going to walk through the door or what they’ll want. One bloke dropped in just because he was going to the dentists over the road, and he asked if we had any Eurythmics. That’s not something we sell a lot of, but I sorted as many as I had when he was in the dentist and when he came back he bought the lot. You just never know! 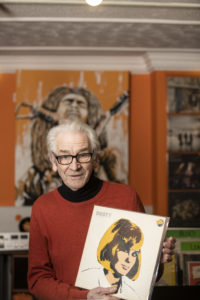 What are the most valuable records you’ve had here?
We’ve had a couple worth a thousand pounds. The first album by a group called Still Life, who were a prog rock group was one. The first Zeppelin album is worth a lot of money – though I’ve never actually seen one myself. All the really expensive stuff tends to go abroad, to Russia or America. But there are thousands worth in between £100 and £500. It’s down to what people want. The other day I bought a record off a bloke and it had ‘Seriously reduced to 74p’ on it. Never been played – and I got £400 for it. Never heard of the group, never heard of the record! Also, it’s to do with condition. In good nick, it’s worth money, in bad nick, it’s worth no money. I’m now looking at a machine that takes warps out of records – that’s £1,200. It takes four hours to do one, as it heats up and cools down, but it can be done. I’ve got a record cleaner, too. A suction thing. You put a liquid on the record and its spins it around and sucks up the liquid, taking the muck with it. Job done. I blow one of them up in a year. I’m cleaning about 500-600 records a week and they’re made for someone to clean about 200, max. But I clean every record I’ve got in the store.

Do you also get people wanting to sell you their collections?
Yeah, yeah. A lot of people come to us thinking they’re sitting on a fortune because they’ve got Beatles records, but I’m afraid often they’re not…

When it’s rare, do people buy it to play, or just add to a collection?
Some just want to collect, some play them, some frame them. I got a record for a bloke and when he came to pick it up I said ‘I hope you enjoy it…’ He said ‘I don’t listen to them – I frame them and put them on the wall!’ Some of the artwork is phenomenal, without a doubt. But most people buy to listen to. It’s mostly younger people buying vinyl. There are those who have started again because they got rid of their old records to buy CDs, but the youngsters are the ones buying most of it. I have a juke box in the shop and half of them don’t know what it is!

What’s special about vinyl?
They talk about the smell of it and all that… I don’t know about that, but it’s a different sound, without a doubt. CDs just don’t sound as good. But it’s down to what you’re playing it on, too. There are people paying thousands and thousands for good stereo sound – there’s a place near here where they sell you a metre long piece of cable and charge you a grand for it!

Is there a kind of Holy Grail record for you?
Not really. If it’s something you like, it doesn’t matter if it’s a tenner – as long as you like it! I would like to get the first Zeppelin because I’ve never ever seen it, but then if I got it I’d sell it. The dearest record I’ve got of my own is probably £100.

What are the oldest records you have here?
We’ve got jazz and blues records going back to the 1920s. A few people collect 78s but we don’t sell a lot of of those. The 80s sell the best. It’s an age thing, I think. With the older stuff from my era – the rock’n’roll stuff – most people have either popped their clogs or they’ve already got it. A young girl came in the other day and said ‘Have you got any Frank Sinatra?’ I said I’d pick up a few for the next time she came in, so she came back a fortnight later and I sorted her out four Sinatra records. That’s what a lot of it’s about. But she’d bought stuff across the board – punk stuff, heavy metal… and Sinatra! You just don’t know do you?

Is it a challenge getting people to discover the place?
It is, but we’re trying to turn Whittlesey around. There was a bloke came in a couple of months ago and he said his ambition was to go to every record shop in the British Isles. He’d been collecting records for 35 years, and he came in here and said: ‘I can’t believe what you’ve got…’ He spent a couple of hundred quid and it was all stuff he said he’d struggled to get over the last few years. What we’re up against is just getting people out here. But word of mouth is priceless. 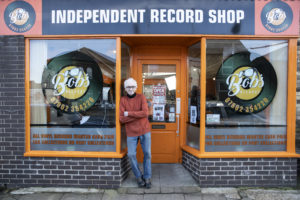