Eight years of research in Peterborough by a University of Sussex lecturer has resulted in a new book which challenges the standard terms of the immigration debate and shows how sharing life stories can help unite people through a vision of common humanity.

Stories from a Migrant City: Living and working together in the shadow of Brexit draws on the stories of over 100 people.

Ben Rogaly, Professor of Human Geography, spent years immersing himself in the city of Peterborough. He met and listened to residents talk about moments and spaces of conviviality and community – moments which challenge the idea that being at ease with difference is the worldview of a cosmopolitan elite.

Prof Rogaly said: “I’ve tried to challenge what we think of as a ‘migrant’. Peterborough, as a New Town, was the destination for many white British people moving out of London. People who consider themselves ‘native’ don’t look enough at their own experience of movement within and across borders.” 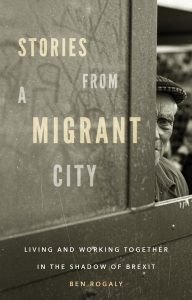 “When I was writing the book, everything was very much shadowed by Brexit. Peterborough voted 61:39 to leave the EU in the 2016 referendum. It is a diverse city in terms of ethnicity, nationality and language. Like everywhere in England there is racism. However, alongside this there are many positive relationships in the city, and spaces where working-class people have come together as community regardless of background.”

Prof Rogaly was originally drawn to Peterborough by a project which aimed to bring culture to the city. He knew that the culture was already there but, voted as the worst place to live in the UK for the second year running, he realized that the real message of the city wasn’t getting out to the wider world.

Prof Rogaly said: “There are certainly resources for hope in the book – for Peterborough and the wider world. I’ve looked through the lens of Peterborough as a case study but it spans outwards from there.

“I think the key message from the book that I’d like people to take away is that, if we listen to individual stories in all their diversity, a common human solidarity can emerge. Now more than ever, it’s important to remember that.”

Stories from a Migrant City: Living and working together in the shadow of Brexit by Ben Rogaly is published by Manchester University Press and available for ten pounds plus P & P by using the promotional code Stories50