Steve Backshall is a naturalist, explorer, adventurer, TV presenter, endurance athlete, and author. He has dived outside the cage with great white sharks, experienced the most extreme pain known to man, and explored completely uncharted areas of our planet. Somehow, he has also found the time to tour the UK with his new show Oceans: Bringing Marine Dreams to Life. We spoke to the star of TV’s Deadly 60 and Expedition with Steve Backshall ahead of his sold-out appearance at the Cresset Theatre. 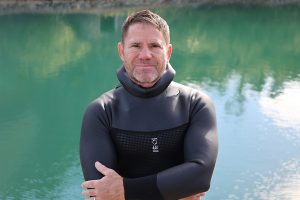 Is the world getting too small for explorers now, or are there still enough uncharted places to discover?
I would have thought that when I was a kid. I was deflated and disappointed to be growing up in an age when exploration was all done. But that was nearly 50 years ago, and yet, here I am today still doing voyages of discovery and still doing genuine, old-fashioned exploration – finding new things, running rivers that have never been paddled down before, making first ascents of mountains, taking the first light into cave systems that have never been illuminated. And it’s 2022! One of the most exciting discoveries in my lifetime has just been found – Shackleton’s ship! All of this brings home to me just how much there is left to be discovered out there.

How did you first get involved with handling dangerous animals? I mean, how do you even learn how to do that?
Just as no mountaineer starts off by scaling Everest, it’s the same with animals. The first snake you catch is never a king cobra! For me, it was grass snakes in the compost heap back home, finding out about beetles and wolf spiders, and watching birds nesting in back gardens. It was a very long and slow developmental process that started before I could barely even walk or talk. I grew up on a smallholding that was populated with rescue animals that we managed to pick up as waifs and strays over a period of about 20 years.

In the time you’ve been making animal documentaries, have you noticed changes to the ecosystem and to biodiversity?
I’ve noticed enormous changes in the 50 years that I’ve been alive. The population of the world has doubled in that time, we have more than halved the number of wild animals on our planet, we have halved our forests, and we have fundamentally altered our climate. There are lots of places I return to where I first filmed in my teens and it’s absolutely heart-breaking to see the changes. But, at the same time, I also get to see how well nature can bounce back if it’s properly protected. Particularly in the oceans, where protected areas can show incredibly quick and impressive results.

Do you think the younger generation is more aware of what’s happening? Are you hopeful that we can turn things around?
There’s just no comparison with today’s generation and my generation. I grew up in an era before the environment was even a thing. There was no such thing as being green. It just wasn’t something that people of my generation thought about or talked about, whereas my kids are now learning about conservation in nursery! They’re coming home and asking questions about climate change and extinction at three years of age. Because of this, I have huge hope for the future, particularly because of all the young heroes who are going out there and making the planet’s problems their own. 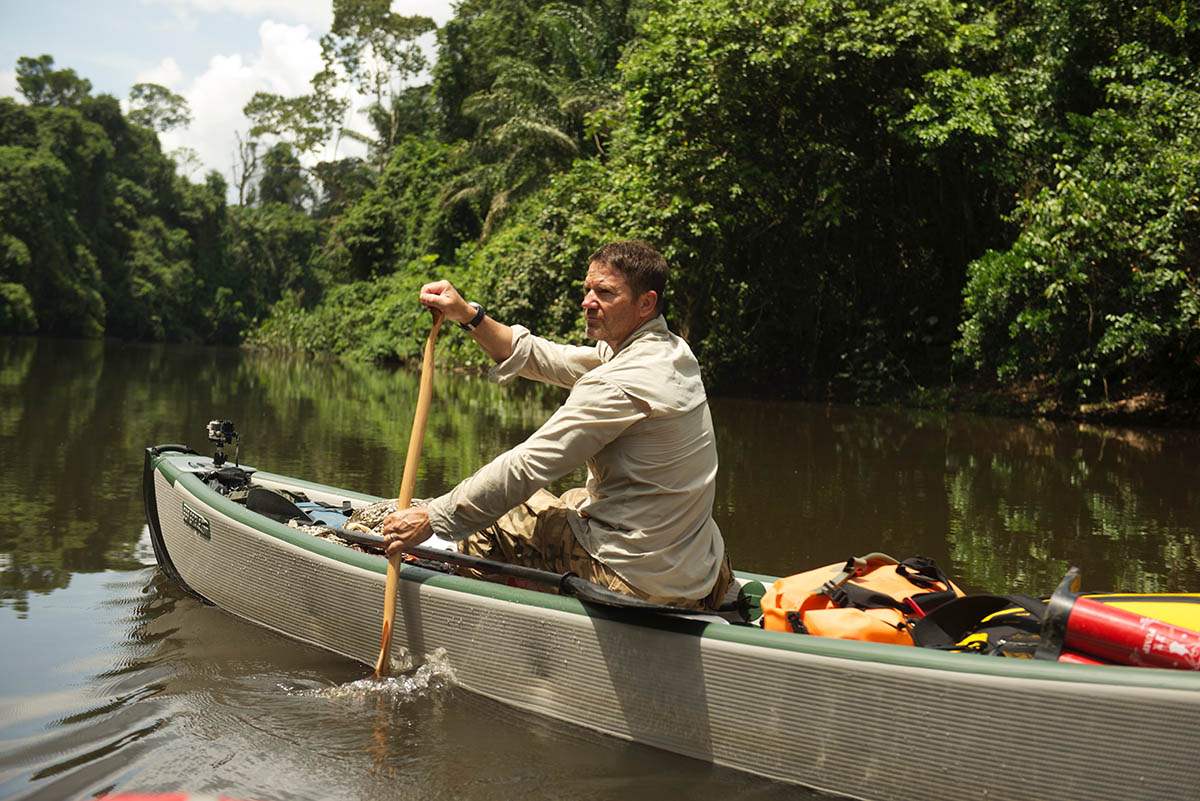 You’re an explorer, a naturalist, a mountaineer, an endurance athlete, a TV presenter, an author. You’re touring the country, you’ve learned three languages, you’re a father…. How on earth do you find the time to do all the things you do?
I think the answer is that I probably don’t do any of those things very well! I spread myself way, way, way too thin! I’m a workaholic though, so that really helps. I give life absolutely everything I have. But being a father is the crux – that’s the key. I have priorities now, so it’s all about unpicking this life that I’ve created for myself over the last 50 years to find a way to ensure I have proper time to spend with my family. That’s the most important thing to me.

Is writing children’s books a perfect antidote to all the travel and adventure? Is that like your downtime?
No! I do all my writing while I’m on the road. You can’t write in a house full of screaming kids. The only time I get to write is when I’m on a plane, or a train, or in a car. So, far from being my downtime, writing is what I do when I’m travelling.

You’ve dived with great white sharks outside the cage – is that the ultimate animal experience?
Yeah, I think it probably is. It’s something which is obviously incredibly dramatic, and it’s something which is only possible with years and years of experience. I had probably been diving with sharks for 20 years before I dived with great whites outside the cage. It’s something you just must not do if you’re frightened. You have to be calm, collected, and experienced for that to be possible.

And yet you said the saltwater crocodile dive was even more scary…
Yes, that was definitely more scary. In some ways, that dive was almost the antithesis of the great white dive, because the shark dive was the sum of all our knowledge and experience, working up to a situation where we felt we could do it safely. With the croc dive, we came out the other end thinking ‘Actually, this can’t be done safely.’ We were kidding ourselves. We were wrong. All the judgements that we had built up, that convinced us we could do that safely, were incorrect. We would not do that again.

What would you say is the most extreme thing you’ve done? When did you genuinely fear for your life?
I’ve feared for my life many times! But the white-water kayaking experience in Bhutan – where I was just seconds away from drowning – was the closest I’ve come to biting the bullet on an expedition. It was one of those moments where you really stop and check yourself and think ‘Something’s got to change. I’ve gone too far and I’m a dad now.’

Talking of biting the bullet, can you even begin to describe the pain of being bitten by hundreds of bullet ants?
No, it’s impossible to put that pain into words. It’s an absolutely overwhelming pain that cuts out everything else in your world – there is nothing apart from pain. I’ve never had another experience like it. Even when I’ve injured myself badly, I’ve never had anything that was so utterly all-encompassing. I received hundreds of bites, and each individual bite is said to be as painful as being shot. That’s why they’re called bullet ants.

What are you afraid of? There must be something…
I am most afraid that the wonders I’ve been able to experience – all the things that have made my life such a joy – may not be around for my kids to experience. So much of what we love, and what we rely on, is disappearing fast, and I do find that frightening.

Expedition-wise, what’s your most satisfying achievement?
Probably the expedition we did in Borneo, where we spent a couple of weeks in pristine rainforest and explored a cave system which hadn’t been mapped or explored. Inside, we found primitive artwork that was at least 40,000 or 50,000 years old – the oldest figurative art in the world. The expert who was with us was on the brink of tears. That’s something I will never forget.

And is there an animal encounter you’ve not had yet? Anything you’d still love to do?
Yes, there’s lots! One of the things about the natural world is that it’s so infinite. There are so many things out there. I mean, there are 800,000 species of beetle! So, there are so many things
I haven’t seen. I would say top of my list would probably be narwhals, but that would be a very tricky one to arrange.

How much of an influence has Sir David Attenborough been on your life?
Sir David has been a massive, massive force in my life. Without any question he is, to my mind, the greatest broadcaster and the greatest storyteller that we have ever seen, and we’re very lucky that he decided to concentrate on wildlife and conservation. He could tell a story about absolutely anything and it would be spellbinding.

You took a degree in theatre studies before switching to biosciences. That’s quite a radical departure!
Hopefully my theatre studies will be very useful to me on this tour! I’m writing the whole thing and putting it all together myself, including the staging, props, and all the science experiments. So, finally, after all this time, I might have found a use for my theatre studies degree! I’ve done lots
of tours in the past, but they’ve really just been glorified slideshows; this is a proper entertainment show with masses of props and staging and all kinds of funky things to illuminate marine environments and marine animals, and bring them to life onstage. So, it’s a whole different level of complexity to anything I’ve ever done before, but I’m really excited about the challenge of it.

How concerned are you over the health of our oceans?
I’m obviously hugely concerned. It’s an environment that we rely on so much and yet it’s in such peril. But, again, I have to come back to the fact that I’ve seen these environments rebound; I’ve seen areas of our oceans that appeared to be desolate and destroyed, but given the right conservation protection status, they can bounce back, and that has to be our hope for the future.

Steve Backshall is appearing at the Cresset Theatre on Saturday, May 7. The show is sold out.