Shaz Nawaz leads the Labour group of councillors. He’s a vocal critic of the council’s budget holders, despite the fact that the budget for this year was balanced without any cuts to services. So what would he do differently? 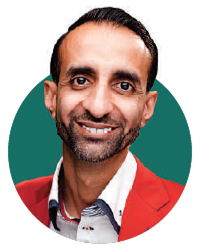 What’s the problem Shaz? The budget’s balanced without any apparent impact on the end user?
The problem is we are eating into our reserves and have been selling off key assets to balance the books. This is a very short-term view, because once we’ve used up all the reserves or sold off key assets, what’s next? Many of those assets also generated income, which we have lost. Then there are the wasteful ways in which the money is spent. Back in 2011 the council signed a 23-year deal to outsource services to Amey. Yet just six years later the decision was made to take back control of them because the contract wasn’t delivering the value expected. Then we were told that the new local authority trading company would cost an extra £2.7m to set up – all after we had been reassured that we had a bullet-proof business plan. Another example is the council’s move to cloud-powered Google apps. It was meant to be the best thing since sliced bread, but now we’ve moved back to Microsoft – a needless waste of millions. And then there’s the £23m loan to Empower, which remains unpaid. All of this has taken place at the same time as council tax support is cut for the most vulnerable in society.

What about sharing services with other public agencies. That has to be a good thing?
I’m all in favour of working with Cambridgeshire County Council to share services and bring in efficiencies – that’s great, that’s what we want. But we’re yet to see many of these efficiencies kick in. Sometimes it feels painfully slow, like wading through mud. Those efficiencies should be coming in now because the government has massively cut our funding! But using external agencies to take over services is short-term thinking. Just look at how quickly the waste and recycling contract with Amey fell apart. From day one we were saying that core services should remain in-house. Now the council is at it again, setting up Medesham Homes as a joint-venture with Cross Keys Homes. Core services should remain in-house and the taxpayer should always be the beneficiary, not external organizations

How you would do things differently? Give us a few examples.
We would build 3,000 council-owned homes over five years. We’d also set up a small, in-house company to build and sell houses. The aim would be to construct 20 to 30 homes a year, generating an estimated £20,000 profit per house. That’s a pretty low margin, so we’re under-promising and we hope to over-achieve. Our plans also include establishing an investment fund to support smaller local businesses. That would generate money for the council, while helping local businesses to grow and employ more people. We want to take that a step further by encouraging local businesses to buy and sell to other local businesses, thereby fostering a circular economy within the city. Then there’s the fact that Peterborough is a gigabit city. We would invest in a technical building that supports the digital economy, sending a very clear statement to the rest of the country that we are committed to digital and helping us to attract inward investment and further income for the council. At the moment there are only five cities with superfast broadband but others will follow and if we don’t capitalise on this now we’ll lose that early adopter advantage.

Cambridgeshire Constabulary’s share of council tax increased by an inflation-busting 12% this year. Police and Crime Commissioner Jason Ablewhite explains why.

Police funding is made up of a central Government grant (54%) with the remainder coming from the policing part of the council tax. To meet increasing demand on policing services, I asked members of the public in my recent survey whether they were willing to pay more towards local policing. With more than 61% agreeing, the additional £24 per year charge for 2019/20 (based on a Band D property) will fund 50 additional warranted officers in Cambridgeshire and Peterborough. Demand on policing continues to grow and whilst Cambridgeshire is a safe county, police now have to spend more time tackling ‘hidden crimes’ such as domestic abuse, child sexual exploitation and modern day slavery. They also spend time helping those in mental health crisis, all of which means resources can be stretched. Added to that, the county’s population is set to rise by 20% by 2031, so it is vital we have enough resources in place to police our county. Cambridgeshire has been part of a Beds, Cambs and Herts Collaboration since 2014, and many efficiencies have been made in this time, while providing resilience across the three forces.